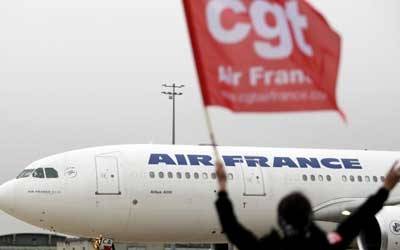 The announcement of 2,900 job cuts by Air France management fell like a thunderbolt on employees. Over the past decade they have already made many sacrifices in terms of pay and working conditions. Many positions have already been cut: the company's workforce decreased from 65,000 in 2004 to 52,500 today. The frustrations of many employees  have now started to bubble over, as shown in the video below.

Even before the Central Administration Board (CCE) meeting on 5th October, the management of Air France, the mainstream media, the government and an army of bourgeois politicians attempted to divide the staff of Air France by shifting the responsibility for job cuts on to pilots and the unwillingness of their main union, the SNPL, to compromise. This old maneuver - divide and rule - has ended in failure. The demonstration on 5th October, in Roissy, was marked by the unity and determination of all sections of staff. As for the many hypocritical condemnations of "violence", at least two shirts having been victims, there has been no comment on the terrible violence of unemployment that Air France has forced on thousands of employees.

On the "violence" of October 5, everything is said in this excerpt from a speech by Jean Jaurès, which Jean-Luc Mélenchon quotes in his statement: "The bosses have no need to exert violent action, of wild gestures and tumultuous words! Some men gather, in private, in security, in the privacy of a board, and a few, without violence, without wild gestures, without raising their voices, like diplomats around the green carpet, they decide that the reasonable salary will be denied to the workers; they decide that the workers who continue the fight will be excluded, will be driven, will be branded with imperceptible marks, known only to other bosses patterns, subjecting them to the universal condemnation by the employers. It makes no noise ". (Jean Jaurès in the National Assembly, June 19, 1906).

We see, things have not changed much since 1906. It is in this atmosphere of "civilized" vultures that year upon year successive "savings plans", increasing the exploitation of Air France workers, have been agreed.

The mobilization of the 5th October showed the anger, unity and determination of the airline workers. However, it is clear that they face opponents both extremely devious and determined. Every mainstream journalist, "observer" and reactionary politician will repeat like a broken record the line of the Air France executives: "there is no alternative. Without these job cuts, the company will go under; it will not be competitive", etc.

The unions dispute the figures and the scaremongering of Air France’s bosses. It is clear that they do everything to present the picture which best suits their plans. But beyond the question of the financial viability of Air France in this market, it is time to draw an industrial and social balance sheet of the privatization of the company that took place in the early 2000s. Put simply, it has been catastrophic. The opening of the market, increasing outsourcing and the systematic use of subcontracting have led to a massive increase of profits for the capitalists in the sector - and a long descent into hell for the workers. The Air France unions must link their struggle against further job cuts to the broader struggle for the re-nationalization of Air France, under the democratic control of workers and without compensation for large shareholders. As long as Air France remains directed by a handful of big capitalists interested only in extracting maximum profits the workers will face repeated stuff cuts, wage cuts and worsening conditions. As brutal as it is, this new "plan" will not be the last. To put an end to this permanent regression, Air France workers should wrest this industrial flagship off the hands of the parasites that are in control today.

Video below: Air France air hostess addresses the bosses as workers interrupt the meeting of the board which announced 2900 job losses. She talks about the constant sacrifices made by the workers for the last four years and how their demand for a proper negotiation and to be heard has been scorned by the board members who refuse to talk to the workers. This set the tone for what happened later.