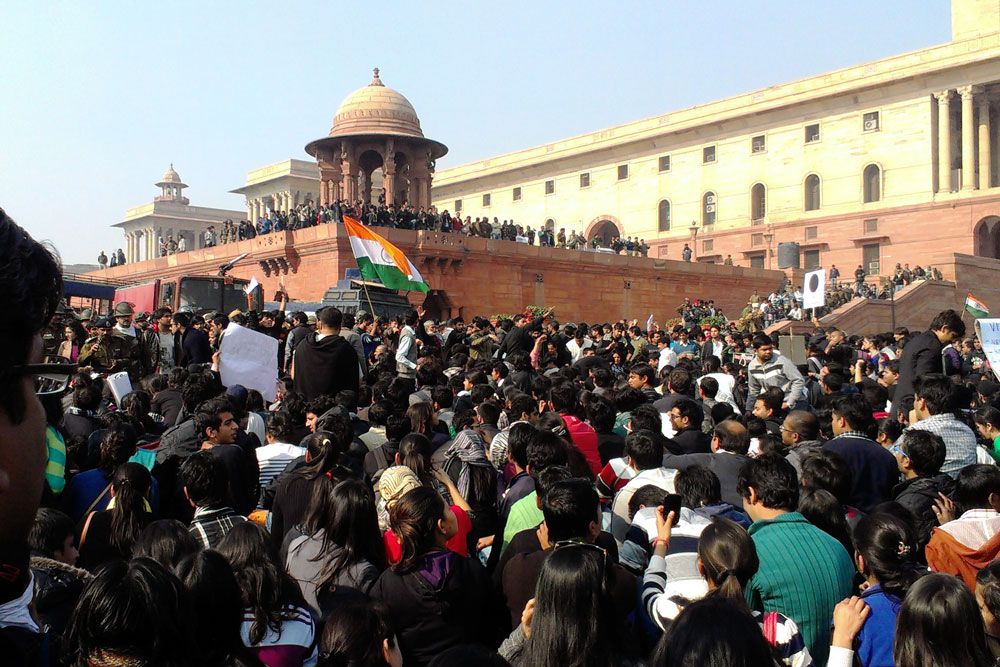 On December 16, 2012 Jyoti Singh Panday along with a male friend boarded a bus in South Delhi. When Jyoti and her friend boarded the bus, they expected to be transported to their destination. They could not have known of the horror that was awaiting them. The victim, Jyoti, was gang raped and brutally tortured by a group of six men in the bus. Jyoti and her friend were then thrown out of the moving bus and she was taken to hospital in a critical condition. She was later flown to Singapore for better treatment but unfortunately she died there on December 29.

Angry public protests followed the gang rape incident. On December 21 thousands of protesters marched in Delhi. They were met with heavy handed police repression including baton charges, water cannon, tear gas and arrests. Protests were also held in Kolkata and Bangalore. After her death the protests spread all over India including Kolkata, Chennai, Bangalore, Hyderabad, Thiruvananthapuram, Mumbai and Visakhapatnam. The government used road blocks and closed down many train stations to stop the protestors from gathering. The main demands of the protests include the provision of speedy justice and legislation and the implementation of stricter laws regarding crimes against women. Most of the protesters were young people, including many women.

The protests were also an expression of the anger and hatred that youth of India has against the corrupt Government and the system. A judicial commission has been set up by the government to investigate the incident. According to Finance Minister P. Chidambaram the commission “will look into the incident, identify lapses on the part of the police or any other authority and fix responsibility for such lapses and negligence”.

In reality this horrendous rape has yet again exposed the real barbarity ravaging Indian society beneath the shiny veneer of economic growth. Crimes like the rape of the 23-year-old physiotherapy intern are nothing new in India. Days after this crime was committed a woman was raped in the Punjab by seven men under very similar circumstances. In fact, there was a two-fold increase in the number of rape cases between 1990 and 2008.

Official figures show that last year 228,650 of 256,329 violent crimes had women as victims but this is most likely an underestimated figure, as only about 10% of rape cases are ever reported. Delhi is said to be the rape capital of the world. It is estimated that more than ten million Dalit (lower cast) women have been raped and the security forces too use it as a weapon against people particularly in areas like Kashmir and the so-called Red Corridor, where the Naxalite guerrilla insurgency is based. In India a woman is raped every 20 minutes.

Marx wrote “Social progress can be measured exactly by the social position of the fair sex”. According to a UN report India is the fourth worst country for women in the world. The plight of Indian women and girls begins even before they are born. More than ten million female foetuses have been aborted and more than 500,000 girls are lost through sex selective abortions every year. Women are just 26.1% of all rural workers, and just 13.8% of all urban workforces. On average they are paid 62% of men’s wages for equal work in a country where 69% live on less than $2 a day.

The rate of growth of the GDP fell steeply in 2011-2012 to around 5.3%. Economic forecasts for 2013 are also not very promising. The high growth rates of the past of around 9% have meant nothing but more misery for the Indian masses. A growing middle class has benefited from economic growth, while a billion Indians have been pushed further into the dark pit of misery and poverty

The explosion of protest demonstrations against this gruesome crime was caught the rulers of India unawares. Lately, India has seen many movements of the so-called “civil society”, from right-wing Anna Hazarae’s hunger strike to that of cartoonist Aseem Trivedi, but the spontaneity and determination of these protests caught the Indian ruling class by surprise.

Even the Chief Minister of Delhi, Sheila Dixit, was forced to join them in order to quell the anger. But these ladies from the ruling class and so-called civil society have nothing to do with the agony of toiling women. There have been many women in leading roles in Indian bourgeois politics but the fate of the poor majority has never changed. From Prime Minister Indira Gandhi to President Partibha Patel and the rise of Mayawati, Jayalalithaa and Mamata Banerjee have failed to deliver anything to the mass of Indian women.

Petty bourgeois feminists are blaming “patriarchal” culture and male psychology for acts like these, and reactionary right wing organisations like the RSS believe that women leaving their homes and western culture are responsible. Of course backwardness and “patriarchal” culture are part of the problem, but the kind of “patriarchal” oppression of women belonging to the ruling or upper classes is qualitatively different from the squalor, poverty and oppression of women belonging to the exploited classes. Further, Indian capitalism has failed miserably to convert the former colony into a modern bourgeois nation state and the questions of national oppression, communal and sectarian conflicts and the provision of basic infrastructure and fundamental necessities have not been solved, nor substantially improved.

The gender issue remains unsolved even in advanced capitalist countries. The idea put forward by the liberals and NGOs that the emancipation of Indian women can be brought about by “legislation” and “measures” is naive at best and fraudulent at worst. Crimes and violence against women should be condemned in the strongest terms and criminals should be punished in a manner befitting their savagery. But laws and repression won't be able to solve the root causes of the oppression of women.

Many on the left, even some regarding themselves as “Communists”, have also been engaged in endless and meaningless discussions around the legal proceedings against the perpetrators and the need for “changing the mindset” of Indian men. The Communist Party of India (CPI) National Secretary D Raja said “The Prime Minister should own up moral responsibility and assure the younger generation that the government would build legal safeguards to counter the menace."   Communist Party of India (Marxist)CPI(M) leader and Rajya Sabha (Upper House of Parliament) member T N Seema said that the Union government should declare 2013 as the "Year of Women's Safety".

That their failure to address concrete socio-economic conditions is leading to such atrocities and the emphasis on cosmetic measures is hardly a surprise. Their politics have been reduced to liberal bourgeois parliamentary manipulations. They have even abandoned their two-stage theory and reformism, let alone revolutionary socialism. During the 34 years long CPI(M) rule in West Bengal some of the most brutal Neo Liberal economic policies were implemented, and open repression has been used to enforce them, as in the 2007 massacre of farmers in Nandigram who were protesting against the forceful acquisition of their land for the Indonesia based Salim Group which has connections with Suharto’s family. CPI (M) rule ended in early 2011 and according to the National Crime Research Bureau (NCRB), the state has topped the charts for eight successive years for crimes against women.

Marxists of course support the introduction of progressive legislation in favour of women’s rights. But all forms of repression in society are due to its division into classes. The emancipation of women or other oppressed sections of society can only be attained by the establishment of a classless society. Women in India have a key role to play in the revolutionary struggle against capitalism. History shows us that at certain times women have always been far more revolutionary than men. The revolutionary movements in the Arab world have proved this yet again. In societies where traditionally women have been brutally oppressed, they have risen up against tyranny and poverty. However, the road to the liberation of women passes through the class struggle. Freedom from the drudgery of household chores, exploitation, harassment, poverty and violence can only be attained through a socialist revolution.

The Bolshevik revolution of 1917 elevated women from the status of domestic slaves and cheap labour to a dignified, free and productive role in the society. The situation of women in the other countries of the South Asian Subcontinent is not much different to that of Russia in 1917. The plight of women workers in the garment industry in Bangladesh and Pakistan is horrific. Afghanistan and Pakistan are respectively at the top of the UN list of being the worst countries for women where they face fundamentalist bigotry and honour killings in addition to relentless poverty and deprivation.

Conditions are fast deteriorating further under capitalism. This year, NGOs and governments in all of these countries will organise glamorous events on International Women’s Day. But on the same day in Russia in 1917 it was women who along with their class brothers began the fight for the overthrow of the brutal Tsarist regime which ultimately led to the socialist victory in October. Such a revolution in India and the region will not only cut across religious, ethnic, caste and regional prejudices but also gender bias and the oppression of women. A socialist victory will be the first step towards the liberation of women and the whole of mankind.