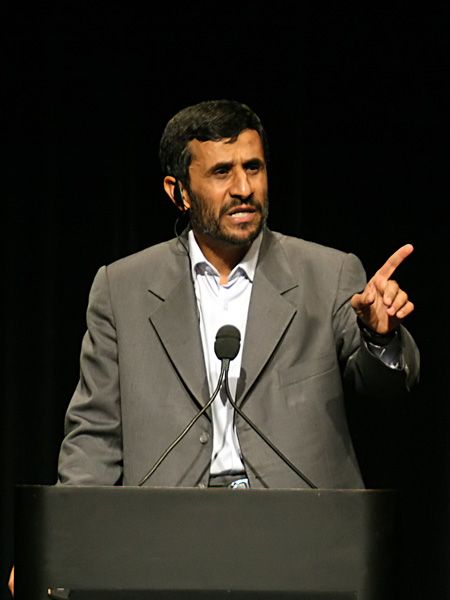 Last week's visit of the president of the Islamic Republic of Iran, Ahmadinejad to Bolivia has unleashed the hysteria of the reactionary media in the country and abroad. The idea has been promoted that the Iranian regime is in some way “anti-imperialist”, “revolutionary”, and that the foreign policy of the Bolivian revolution must be guided by the principle of “multi-polarity”, or to put it clearly, the principle that “the enemy of my enemy is my friend”. Here we publish a statement by the Marxist Tendency in Bolivia, analysing the real character of the Iranian regime.

The visit of the president of the Islamic Republic of Iran, Ahmadinejad to Bolivia has unleashed the hysteria of the reactionary media in the country and abroad. Maybe the most scandalous example is that of Maria Anastasia O’Grady who writes an article in the Wall Street Journal with the headline “The end of Bolivian democracy”. Similar articles and editorial notes have appeared in all of the capitalist media in Bolivia.

As Bolivian revolutionaries we denounce this hypocritical campaign of the agents of US imperialism and the media owners at the service of the oligarchy. By what right does Ms. O’Grady speak of a dictatorship in Bolivia, when she openly supported the coup in Venezuela in April 2002, the murderous regime of Mesa, responsible for the killing of dozens of Bolivians in El Alto during the struggle against privatisation of gas, and more recently has given full support to the military coup in Honduras?

By what right does the right-wing media in Bolivia criticise anybody, when they gave full support to all the dictatorships this country has suffered and were involved in the attempted coup against the legitimate government of Evo Morales in September last year?

The days in which the foreign and domestic policies of Bolivia were decided in Washington or in the offices of the US embassy in La Paz are well and truly over. Bolivia has the right to establish trade and diplomatic relations with any country it wishes to.

However, as revolutionary Marxists, we are worried about another idea that has been promoted in our country in relation to the visit of Ahmadinejad: the idea that the Iranian regime is in some way “anti-imperialist”, “revolutionary”, and that the foreign policy of the Bolivian revolution must be guided by the principle of “multi-polarity”, or to put it clearly, the principle that “the enemy of my enemy is my friend”.

First of all, we must make it clear that the Iranian regime of the Islamic Republic is not a revolutionary regime. The Iranian revolution which was victorious in 1979, was a genuine mass revolution, with the active participation of the working class, the youth, the peasantry, the soldiers, the women, etc. The decisive factor which brought down the hated Shah was the general strike of the oil workers. Millions of workers organised shoras (factory councils) in their factories and took over control and administration of these.

Millions of peasants occupied the land of the big landowners (as they aspire to do today in Bolivia). The students occupied their schools and universities and proceeded to democratise them, putting an end to the elitism that had dominated them. The soldiers also set up their shoras and proceeded to purge the army from reactionary officers. The oppressed nationalities (Kurds, Arabs, Azeri, etc) conquered their freedom. The Iranian people as a whole threw away the yoke of imperialism.

However, the current Islamic Republic of Iranian regime was consolidated in the period between 1979 and 1983, precisely on the basis of the smashing of this revolution on the part of the fundamentalist Islamic clerics. Over a period of several years all the conquests of the 1979 revolution were destroyed. Land was given back to landowners, expelling the peasants who had taken it. The factory councils were destroyed and replaced by Islamic shoras, leaving the workers with no right to organise or to strike. A particular interpretation of Islam was imposed on the population as a whole, bringing the most ruthless denial of women’s rights and creating an atmosphere of ideological oppression for the majority of the population.

The hijacking and smashing of the workers’ and peoples’ revolution of 1979 on the part of fundamentalist Islamic clergy was only possible because of the wrong policies of all left-wing organisations who thought that they could form a united front with the Muslim clerics led by Ayatollah Khomeini, whom they regarded as “anti-imperialist”. They paid dearly for their mistakes. Over a period of four years, with increasingly brutal attacks against the left, the power of the Islamic Republic was consolidated over what had been a working class and anti-imperialist revolution. In order to be able to achieve this, the Muslim clerics dressed themselves in anti-imperialist robes, organising the incident of the US embassy and skilfully exploiting the war with Iraq. By 1983, all left-wing parties had been banned (despite their support for a united front with Khomeini), and some 30,000 militants of different groups of the reformist, nationalist and revolutionary left had been killed. These are the origins of the present-day Islamic Republic of Iran. Not a revolutionary regime, but rather a regime born by smashing a revolution.

The current situation facing the revolutionary youth, workers and peasants in Iran is one of the most ruthless suppression of their basic rights. In Iran the workers have no right to organise or to strike and if they break these laws they face the most brutal repression. When some 2,000 worker activists attempted to organise a May Day celebration in Tehran this year, the police responded with brutal repression and 50 of them were arrested (some are still in jail). Millions of Iranian workers are owed unpaid wages for months. When they try to organise they face brutal police repression.

While in Bolivia, the revolutionary process has had as one of its main points the struggle against privatisation (of water, gas, publicly-owned companies), in Iran, Ahmadinjead has accelerated privatisation of state-owned companies (167 privatisations in 2007/08 and a further 230 in 2008/09), including the privatisation of telecommunications, of the Isfahan Mobarakeh Steel mill, of the Isfahan Petrochemical Company, of the Kurdistan Cement Company, etc. The list of companies to be privatised include the largest petrochemical complex in the country, most large banks, gas and oil companies, the insurance sector, etc.

Even though Ahmadinejad’s government criticises US imperialism in an attempt to divert the masses from their internal problems, it is not even consequent in its struggle against this enemy which it criticises. The US military intervention in Iraq could count on the passivity of the Iranian government and ruling class, which saw the weakening of the rival Iraqi regime as an opportunity to strengthen their power in the region. Instead of favouring a unified revolutionary struggle for national liberation in the neighbouring country, the Iranian regime played a key role in putting a break to this and dividing the struggle on religious lines.

These are the conditions that have given rise to a genuine revolutionary movement of the Iranian masses against the hated regime of the Islamic Republic and the government of Ahmadinejad, which came to power through electoral fraud and the smashing of the protests against this.

Clearly, as revolutionaries, we must oppose any imperialist aggression against or interference in Iran, in the same way that we have struggled against imperialism in our own country. However, it would be fatal to mistake revolution with counter-revolution.

The natural allies of Bolivian workers and peasants are our class brothers and sisters in Iran - the workers, youth and peasants who struggle for their basic rights: the end of oppression against national minorities (Kurds, Azeris, Arabs and others), the recognition of basic trade union rights (the right to strike, to demonstrate and to organise); and bread, jobs, health and education for all.

We must distinguish diplomacy and trade relations from a revolutionary foreign policy. The government of compañero Evo Morales, which is based on the strength of the social organisations of working people from the cities and the countryside, cannot have any illusions in the real character of the reactionary regime of Ahmadinejad, based on the smashing of the basic democratic rights of Iranian workers and peasants.

A genuine revolutionary international policy must be based on seeking the unity of the workers, peasants and the oppressed of the world, against the bankers, capitalists and imperialists of the world. To base the foreign policy of the revolution on alliances with any regime which comes into conflict with the US, regardless of its character, it is not only wrong, but also, potentially dangerous for the Bolivian revolution.

[Read the original article in Spanish. Visit the website of El Militante - Bolivia.]