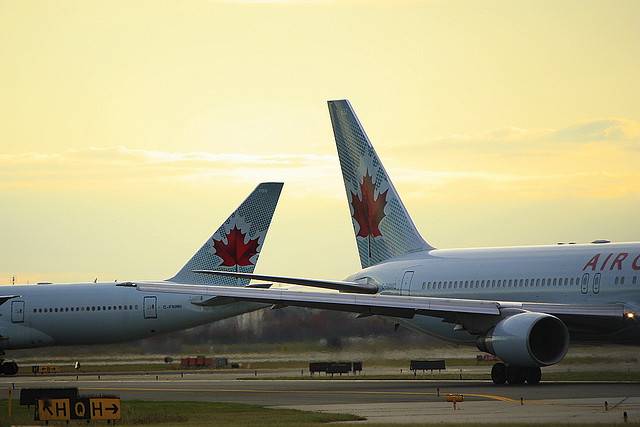 It was not that long ago that Air Canada was facing imminent bankruptcy and placing the burden on its workers. In 2004, the airline wrung concessions from their employees — at the time, estimated to cost each worker $10,000. Aside from wage and benefits concessions, the unions also agreed to allow Air Canada to stop paying into the workers’ pension plan until 2010. In 2009, Calvin Rovinescu took over as chief executive for the airline, with the Globe and Mail remarking, “The Air Canada board is clearly preparing for a showdown with unions.” The two years that followed have been marked by a string of demands for concessions by the four Air Canada unions, even as profits and productivity soared.

Not surprisingly, Air Canada is once again crying poor in their round of negotiations with the four different unions that make up Air Canada’s workers. As has been the case in most recent labour struggles, the Air Canada bosses have focusing on slashing workers’ pensions. Claiming that its “pension deficit is more than $2-billion,” the airline calls for severe cuts to existing pensions, as well as the elimination of “defined pension benefits” for new employees in favour of “defined contribution benefits”. The difference in the two pension schemes is that currently, workers receive a set pension income upon retirement; under defined contributions, pension income would depend on how much is paid into the fund and how many workers are collecting pensions. Therefore, there is much less security for workers. At the same time, however, the airline would preserve a defined pension plan for their top executives!

The second major issue in these contract negotiations is the creation of a new discount airline. While promoted by the airline executives as key to making Air Canada competitive, and as a potential for creating almost 500 new pilot jobs by 2015 — and three times that many flight attendant jobs — it would also implement a two-tiered wage system. The “discount” would not simply be for travellers — new employees at this new air carrier would be paid significantly less than their counterparts in the main branch of the company. Furthermore, a discount airline, in order to be what Rovinescu refers to as “low cost”, would require these lower-tier employees to work longer hours, such as working round-trip, non-stop flights to and from Europe. At the moment, there is also no guarantee that Air Canada jobs wouldn’t be turned into jobs at this new discount carrier.

Early last month, the Air Canada Pilots’ Association voted with a two-thirds majority to reject these new concessions. Moreover, four union officials, including Bruce White, the ex-president of the union, have been replaced in the course of the talks, as the members grow increasing unhappy with what they are being offered. The Canadian Union of Public Employees (CUPE), which represents Air Canada’s flight attendants, has just recently called for the services of a conciliator after finding the airline entirely unwilling to negotiate. The International Association of Machinists and Aerospace Workers (IAMAW), which represents 11,000 mechanics, baggage handlers, cargo agents, and warehouse staff, is currently resisting the same pension cuts. And the Canadian Auto Workers (CAW), representing almost 4,000 customer service and airport workers across the country, has been forced to go to the picket lines in the face of Air Canada’s intransigence.

Each of these unions is facing attacks to their future, to the safety and security of their jobs, to their livelihood once they retire from a lifetime of work, to the future of the union, and the workers as new recruits get increasingly lower wages, and an increasingly more difficult job. Throughout this, the four unions which have been affecting by the new attack have been strong and determined to protect their rights. Jeff Taylor, the president of the Air Canada section of CUPE has stated that it would be “unconscionable” not to protect new employees, and the four unions are reportedly working together to resist these attacks on pensions.

The corporate media has tried to demonize unionized workers, claiming that unions need to adapt to the new world situation, and that businesses can no longer afford to “give” workers a good wage or guaranteed pensions. The facts are different, however; Air Canada is making hundreds of millions of dollars in profit. Their executives enjoy obscene salaries and benefits, while workers have willingly given concession after concession. Adjusted for inflation, Air Canada workers have seen their wages cut by 10% since 2004. On the other hand, Air Canada CEO Calvin Rovinescu’s salary last year was over $5-million. Former CEO Robert Milton, the man responsible for breaking up Air Canada and getting the concessions from the union, collected over $80-million in salary between 2004 and 2009!

As with Canada Post and US Steel before them, Air Canada workers have been forced to strike to defend their hard-fought gains. But, this strike is not just for the CAW workers or the other workers unionized at Air Canada. The bosses and their allies in government have made it clear that in this age of austerity, they intend for all workers to pay for the capitalist crisis. This is why this strike is so important for all working-class people; an attack on one is an attack on us all!