Mexico
Share
Tweet
Alan Woods spoke at a second meeting in Puebla, presenting Reason in Revolt. The meeting was a great success, and shows the growing thirst for revolutionary ideas in Mexico. 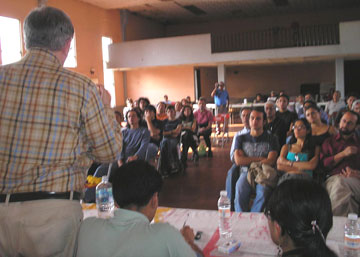 On the afternoon of 24 May a second successful public meeting with Alan Woods was held in the city of Puebla, México. On this occasion he presented the book Reason in Revolt, Marxist Philosophy and Modern Science, published by the Fundación Federico Engels México. The venue was the trade union local of section 30 of the Secretariat of Agriculture, Food and Fishery (SAGARPA), which recently carried out a three hour strike against the attacks of the usurped government of Felipe Calderón.

The first speaker was the president of the Fundación Federico Engels México, Liliana Bautista, who appealed to the public to collaborate with the Marxist publishing house and become members. She mentioned the titles published to date, including Mexico in the orbit of the Latin American Revolution, which deals with the revolutionary events of the past year in our country and is hot off the press and on sale for the first time. 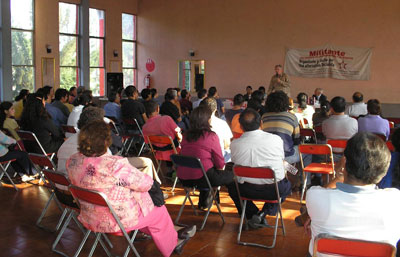 The second speaker was the renowned scientist and professor Germán Martínez Hidalgo, physicist and chemist at the Universidad Autónoma de Puebla, and former militant of the Communist Party. At present he is a member of the Astronomic Society of Puebla and a columnist of the daily paper, El Sol de Puebla. He repeatedly praised the book which he said was far superior to anything else he had read on the subject. He said it was fundamental for him and he always recommended it to his friends. His brief speech was marked by a clear materialist and dialectical content: "The logic of dialectics is the real logic of nature", he explained. And he added: "Who better to explain the content of this excellent book than its author?"

Alan Woods began by asking why we needed a philosophy. He pointed out that everyone, either consciously or unconsciously, has a philosophy. Apathetic people merely reproduce the ideas of the ruling class. Marxist philosophy helps us to understand the world in order to transform it. Alan said, "If you are satisfied with this world, then I have nothing further to say to you. But if, like me, you wish to change the world, then you need a revolutionary philosophy - dialectical materialism." 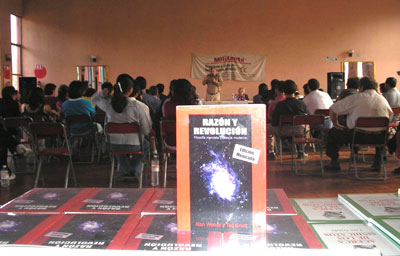 He then began a most interesting exposition of the philosophy of Marxism, explaining the difference between materialism and idealism, which in philosophy have nothing in common with the everyday usage of the terms. "We are matter", Alan said: "Actually, we are the residue left over from a star that exploded millions of years ago".

"All our ideas come from material reality, including the most abstract ideas like mathematics", said Woods, who gave a simple example. "Why do we use a numerical system based on 10? Because we have ten fingers. There is only one exception that I know of and that comes from here in Mexico. The Mayas counted to 20 because they also counted their toes". With these simple arguments he explained the ideas of materialism, that we do not need any God to understand reality, and that even the most abstract sciences are derived from the material world.

"Dialectics is one of the most beautiful ideas and is of great antiquity. 2300 years before Darwin, the Greeks discovered evolution, and deduced that man had evolved from a fish. They knew that the world is round and that the moon is a planet that reflects the light of the sun".

He then spoke of Heraclites, the father of dialectics: "Everything is and is not because everything flows, is in constant change and transformation". Alan said: "Even this table, apparently solid, is composed of billions of atoms and particles, moving at incredible speeds". Then he passed on to geology. "We have a proverb that says: As solid as the ground beneath my feet. But in fact the earth's crust is as thin as the skin of an apple, and beneath it there are terrifying forces, as Mexicans well know. Not long ago I was in Pakistan and I pointed out that India was once an island that collided with Asia, to form the Himalayas. On top of these mountains they have found marine fossils, because they were once at the bottom of the sea".

The exposition was very wide ranging, touching on sciences like mathematics, biology, geology, physics and chemistry and explaining clearly the vision of materialist dialectics. The audience was captivated, and it was plain from the faces of people that they were hanging on every word. It was also clear that many who had come to the previous talk on Bolshevism were present. This shows the great interest of the youth and also veterans of the workers' movement in the ideas of Marxism. These ideas are as relevant as ever.

In the discussion, as one might expect, the questions were not limited to aspects of philosophy, religion and science. They mainly dealt with revolution and socialism. Alan Woods delivered a very profound reply, in which he said "A socialist revolution is not only possible but necessary in Mexico". On religion he said. "The real question that ought to be asked is not whether there is life after death, but whether there is life before death". He was interrupted several times by applause.

Alan said that human beings under capitalism are only slaves. The ruling class exercises an ideological domination over society, which is even more important than physical coercion. The Egyptian priests developed art and science because they had sufficient time and leisure. Trotsky said: "How many Aristotles are herding swine? And how many swineherds are sitting on thrones?"

In a socialist society the working day would be immediately reduced to six hours, with no reduction in wages. This would give us time to do other things we could not do before. But this would only be the beginning. Alan gave an inspiring vision of the future socialist society, when men and women would attain their full potential and the new frontier would be the conquest of space. The audience was enthusiastic and afterwards Alan signed a lot of books.

These meetings show the growing influence of the Marxist tendency in the workers' movement and the excellent work of the comrades in Puebla who pasted 2,500 posters announcing the meeting. Although they were held in a bad period (the students were on holiday and many go back to their home states) the attendance was very good. The second started at 5pm on Friday, which is the worst possible time, but was the only possibility because of Alan's tight schedule - yet there were over 100 people in the hall. There were students, workers and militants of the PRD, many young faces but also many veterans of the workers' movement.

Between the two meetings of Thursday 23 and Friday 24 in Puebla the comrades sold material worth 3,500 pesos (approximately 250 euros) in books, documents and newspapers. This shows the thirst for ideas and the huge potential for the development of the Marxist tendency in Puebla.