Mexico
Share
Tweet
On Thursday May 24 the supporters of the Mexican Marxist Tendency Militante and the Frederick Engels Foundation in Puebla organized a very successful public meeting to launch the book Bolshevism: the Road to Revolution.

Puebla, the fourth biggest city in Mexico, is an historically important place, and the cradle of the Mexican Revolution. It has a strong revolutionary tradition, notably the militant workers and students movement in the 1960s and 70s. Here there has always been a sharp social polarization between Left and Right, Communists and anti-Communists.

Traditionally Puebla was the heart of the textile industry, but there is also the car industry, which employs about half the workforce. Therefore there is a very militant tradition both of the workers and students. This was clearly reflected in today's meeting. 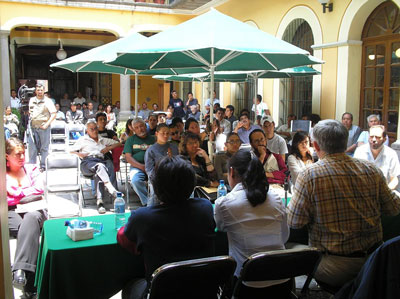 At 12:30 under a blazing sun the meeting opened in the courtyard of the beautiful Spanish colonial Insituto de Ciencias y Humanidades, part of the University of Puebla. The courtyard rapidly filled up with an audience of workers and students, intellectuals and PRD activists. Soon there was standing room only. The total attendance was more than 150, and the mood was extremely receptive throughout.

Comrade Carlos Márquez spoke first, briefly explaining the nature and aims of the Frederick Engels Foundation and inviting the public to participate in its work of publishing Marxist books in Mexico. Among the titles already published here are: Reason in Revolt, Bolshevism: the Road to Revolution, Trotsky's The Permanent Revolution and On Trade Unions, The Red Book of Leon Sedov and Stalin's Gangsters, which is due to appear shortly, together with a book on the recent revolutionary events in Mexico.

The main speaker was comrade Alan Woods, who spoke for an hour, tracing the history of the Bolshevik Party from its earliest beginnings up to the October Revolution. Alan gave a very vivid account of the events of the 1905 Revolution, drawing many parallels with the present situation in Latin America:

"The history of Bolshevism is not some fossil in a museum, but contains vital lessons for the workers and youth of today," he said.

He traced the revolutionary process though the dark period of reaction that followed the defeat of the 1905 Revolution, and showed how the process inevitably proceeds, dialectically, through ups and downs: "In a revolution every defeat is only the prelude to a new revolutionary upsurge," he added. 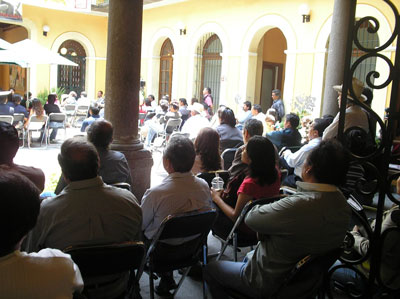 From the First World War Alan proceeded to describe the events of 1917, and explained in detail the flexible tactics by which the Bolsheviks, under the leadership of Lenin and Trotsky, succeeded in winning over the majority of workers and soldiers in the Soviets and taking power.

Ridiculing the argument of the bourgeois historians that the October Revolution was a coup, Alan said: "On the contrary, the Bolshevik Revolution was the most popular, the most democratic revolution in history, in which the masses played the most active role".

The audience followed this speech with great attention and expressed their appreciation with enthusiastic applause. It was noticeable that many veterans of the workers' movement in Puebla were visibly moved by this.

There followed a session of questions and discussion in which questions were asked about the Permanent Revolution, the possibility of using parliament, internationalism, the importance of the subjective factor and other interesting matters.

In his reply comrade Woods dealt mainly with the present situation in Latin America, showing the close connection between the history and ideas of Bolshevism and the Russian Revolution and the tasks facing the workers and peasants of today: "It is absolutely necessary that we learn the lessons of history, he said, and apply them to present conditions". 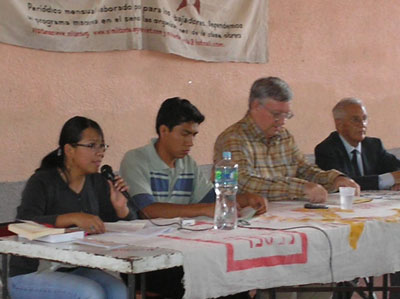 "In the whole of human history there have been many tragic defeats, many suppressed slave uprisings, like that of Spartacus and the Paris Commune. But in 1917, for once, the slaves fought back and won. That is what the bourgeois can never forgive the Bolsheviks for". He said. "In the 90 years since October there have been many occasions in which the working class could have taken power. If they failed to do so, it was not their fault but because of the lack of a revolutionary party and leadership".

At the end there was an appeal for all those present to join and help build the Marxist Tendency Militante. The large number who gave their names and addresses later and bought Marxist literature is an indication that this message did not fall on deaf ears.