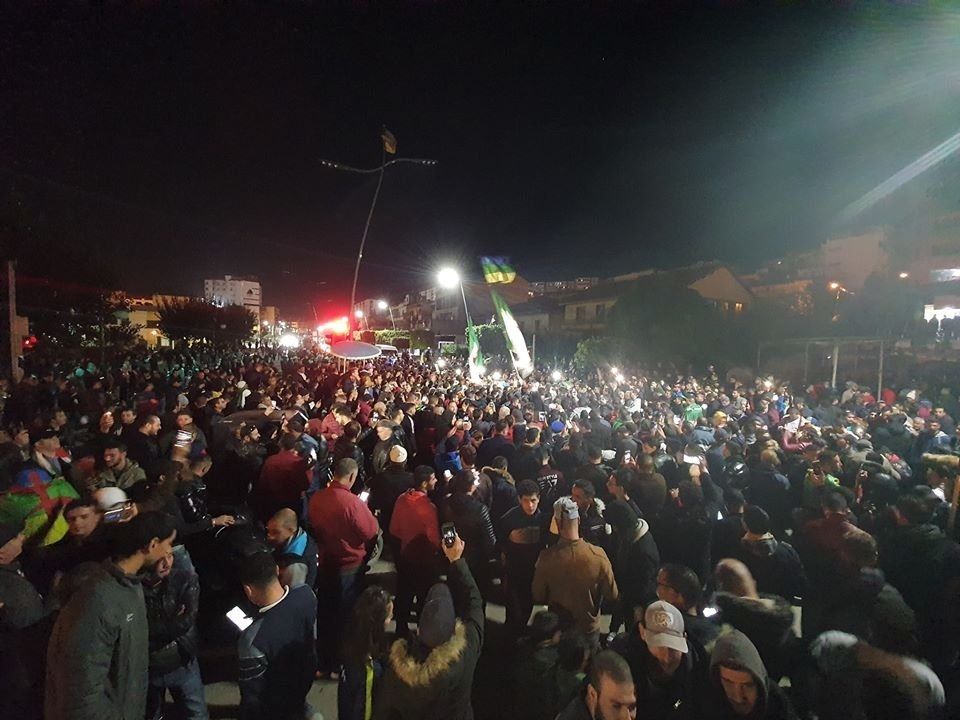 Yesterday’s presidential election in Algeria was marked by a massive boycott campaign called for by the Hirak movement, which is now 43 weeks old. The boycott had been preceded by a four-day general strike and was particularly strong in the Kabylie region. Tens of thousands came onto the streets across the country defying a police ban on demonstrations. Whoever the generals decide will be the country’s president, they will not have any real legitimacy.

The presidential election on 12 December had been called as a way to give the rule of the generals a certain legitimacy. The Hirak movement against the regime had already forced the resignation of the decrepit Bouteflika in April, but the revolutionary uprising had not been completed. The generals, with Gaïd Sala at their head, took over from the ailing president. An attempt to hold regime-controlled elections in July had to be abandoned in the face of mass popular opposition.

12 December was therefore an important test. For the general’s gang, it was a test of their ability to put an end to the movement through a controlled transition to some form of “democratic rule”, in which the whole corrupt, mafia-like system of power that existed for decades would be preserved. For the Hirak, it was a test of the level of support for the movement after 10 straight months of mobilisation and of its ability to effectively boycott the election.

The call for a boycott and a four-day general strike came from below, from the movement itself, which remains largely spontaneous and without any recognised leadership or structure. The huge marches on Revolution Day (1 November) showed clearly that the movement was still strong and defiant, and served to increase the people’s confidence in their own strength.

The four-day national strike started on Sunday, 8 December and had a large following in the main cities of the Kabylie (the Amazigh region). Tizi Ouzou, Bejaïa, Bouira and other places were completely paralysed. Workplaces came to a standstill and there was also a general shut down of commerce.

Significantly, in Bejaïa, the strike call was issued by the autonomous civil servants union SNAPAP, and the autonomous teacher’s union SATEF, but also by the local structures of the “official” UGTA union. The Bejaïa UGTA issued a statement for four days of “strikes and rage in the public and private sector” against the elections and for the release of all political prisoners.

From day one of the strike, the main local workplaces (the harbour, the electricity and natural gas company SONELGAZ, water company ADE, oil company NAFTAL, Soummam, the agro-industrial CEVITAL, milk company Candia, etc.) were paralysed, as were all local shops.

in Bejaïa, the autonomous unions, the local branch of the official UGTA and the citizens committees have joined in the call for a 4 day general strike against the regime rigged elections https://t.co/WndoCX6kVM

The situation was similar across the Kabylie region, but the strike was not limited to it. There were also big demonstrations in Oran, Constantine, Algiers. The students at the majority of universities and lycées also joined in.

Students have played a key role in the Algerian hirak movement and today have walked out at unis and schools across the country as part of the 4-day general strike against Dec 12 regime rigged elections pic.twitter.com/cgm2wQlRUj

In some cities, the movement was so strong that improvised strike and citizens’ committees established “minimum services” in order to supply food to the population. For instance, there would be certain bakeries that would be allowed to make bread under permission from the committee and then sell it after 5pm.

In Maatkas, a town in Tizi Ouzou, on the first day of the strike, protesters marched to the Daïra district administrative offices carrying sacks of cement and bricks and proceeded to build a wall blocking the entrance, thus preventing the distribution of any election material or ballot boxes: 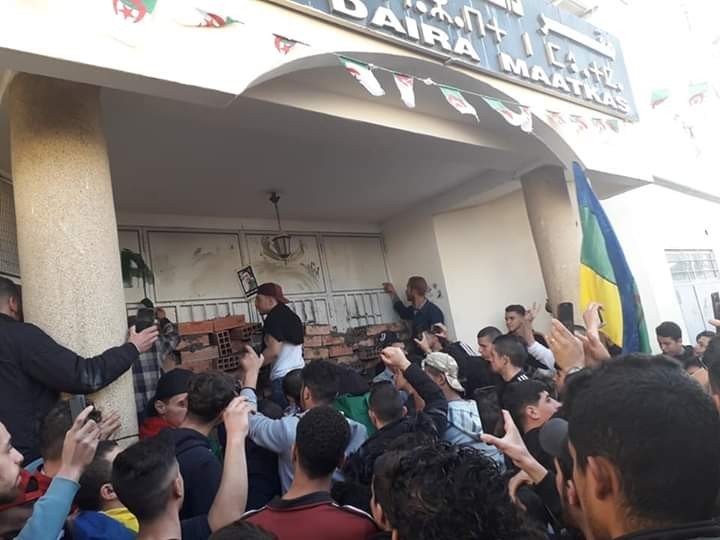 The movement was gearing up towards the boycott of the 12 December elections. The generals had come up with five candidates, all of them linked to the old regime, having been ministers or high-ranking officials, and all of them over 50 (some over 70!). One of them, Ali Benflis, was the head of the government during the bloody repression of the 2001 Black Spring. They represented everything the people hated the most about the corrupt, capitalist, thieving regime.

As mentioned above, the Hirak movement is still largely spontaneous, relying on word of mouth and ad-hoc local leaders rather than any formal organisation. The Platform for Democratic Action (PAD) – a coalition of left-wing, liberal and democratic parties and organisations – issued a call on 8 December against “the electoral farce” and calling on all Algerians “to join in all forms of peaceful action proposed by the movement, including the general strike”. The PAD, which includes the country’s two Trotskyist parties (PT and PST), is clearly not leading the movement, but rather tail-ending it, and its statements are always phrased in terms of the “rule of law”, the “independence of the judiciary” and other democratic-sounding phrases, without ever posing the social and class questions. It is in fact a popular front.

The eve of the election was marked by huge demonstrations across the country. In the capital Algiers, the crowd defied the police lines with chants of «Dégage Gaïd Salah, had el âme makache el vote!» (Gaïd Salah out, this year there’s no vote!), «Makache intikhabate maâ el îssabate!”» (No elections with the gang!).

Huge march in Bouira (Algeria) on day 2 of a 4-day general strike against the regime's election on Dec 12 #hirak pic.twitter.com/JsosRBR1YH

There were also evening demonstrations in the main cities and towns, and in Bejaïa the crowd organised to stay up all night to boycott the election from dawn. In Algiers the police charged against the crowd of peaceful protesters. The stage was set for an open confrontation.

On 12 December, not only was there a massive boycott of the election but also huge demonstrations defying the police ban. The scenes in Tizi Ouzou were electric. A crowd numbering thousands gathered outside one of the polling stations, which had to be protected by a line of riot police. In effect, no-one was able to go in to vote:

In Bejaïa, protesters entered one of the polling stations to find ballow boxes stuffed with ballot papers, which they proceeded to destroy:

Algeria: protesters entered a polling station in Bejaïa to find stuffed ballot boxes, which they proceeded to destroy. the #Hirak movement boycotting the gang's election pic.twitter.com/QQNGZMl1dF

In the port city of Jijel, in the country’s north east, the people decided to put their ballot papers straight in the bin:

In the coastal city of Jijel, the people are literally binning their ballot papers as part of a mass boycott of the regime's election: pic.twitter.com/43SMGN8xnn

After a while, the police, powerless to do anything at all in the face of massive crowds, were forced to withdraw. In the strongholds of the movement in the Kabylie, there was no election at all, the movement had won. Constantine witnessed one of the largest demonstrations since the beginning of the Hirak in February.

A crucial point was the capital Algiers. Here, from early in the morning, protesters started to gather in defiance of a ruling by the Junta against any public demonstrations and against the background of increased repression and arrests of activists since the summer. The crowds were so big that the police could not contain them:

Algiers: massive demonstration against the gang's election in a massive display of election boycott #Algerie #لا_انتخابات_مع_العصاباتpic.twitter.com/iBf2Q6NV0V

This situation continued throughout the day with hundreds of thousands of people occupying the main streets and then marching down to the Grande Poste building, facing occasional police charges. The people from the militant neighbourhood of Bab el Oued managed to break through police lines to join the main body of protesters.

During the day, the regime used different tricks to try to present an image of business as usual. There were regular updates of turnout figures and they mobilised soldiers in plainclothes queueing at polling stations. The state-controlled media also constantly churned out propaganda. Nothing worked. The truth was that the boycott had been a massive success and was backed up by tens of thousands on the streets.

Victory for the boycott: where next?

The Hirak had won the day. It had defeated the general’s election. The proclaimed winner, 74-year-old Abdelmadjid Tebboune, several times minister and prime minister under Bouteflika, has no legitimacy whatsoever in the eyes of the masses.

The 43rd Friday demonstration of the Hirak today will certainly be massive and yet another show of strength of the popular uprising. The question of power is now starkly posed in Algeria. Who rules the country? The general’s gang is unable to rule effectively and cannot even organise a presidential election, but they formally hold the levers of state power. The Hirak movement has the support of the majority and is able to prevent the state from functioning, but it has not yet overthrown the regime completely nor taken power.

While the movement is largely spontaneous, it is clear that, even in the last week of mobilisation, structures are emerging. Committees have been set up at workplaces, universities, neighbourhoods, towns and cities. Leaders have emerged who are in one way or another recognised by the movement.

The next step of the movement must be to organise an insurrection to bring down the regime and to chase the generals out. This is perfectly possible, as the general strike and boycott have proven. It requires the strengthening of the committees and their coordination at local, wilaya (province) and national level through elected representatives who should be recallable at any time. This, combined with a revolutionary general strike, would not only paralyse the generals (as we saw yesterday) but also provide an alternative form of power, one based firmly on the working people and the poor.

In these circumstances, of a moribund regime now based on the power of the army, democratic slogans are important, including that which has been raised by left-wing and democratic parties of the convening of a constituent assembly, freedom for all political prisoners, the overthrow of the current junta, freedom of expression, assembly and strike, a people’s trial for all those responsible for repression, etc. These however should be combined with social and economic slogans. For a decent minimum wage, the expropriation of the ill-gotten gains of the generals and other old regime officials, the expropriation of the multinationals, the defence of the state property of natural resources, etc.

All of these slogans should be combined in the struggle for “generals to the bin” and all power to the revolutionary people, through their own democratic committees. The Hirak should trust only its own forces and not the shameful elections of the generals’, nor the sugar-coated “democratic” words of liberal politicians.

Gaïd Salah and the generals: OUT!

For a revolutionary Constituent Assembly!

For a workers’ government!