On 25 September, a general strike paralysed the Argentinian economy. In a demonstration of the enormous power of the working class, public transport came to a standstill, schools and universities were shut, public institutions and banks closed and private industry ceased to function. Meanwhile, president Macri was in the US making further concessions to the IMF in a desperate attempt to get a larger bailout.

The general strike, the fourth against Macri’s government since he won the election in December 2015, revealed the depth of anger and opposition at his economic policies and the impact of the crisis on working people. Inflation is running at an annualised rate of 42 percent, unemployment is growing rapidly as interest rates have been increased to 60 percent, the country’s debt has shot up to 70 percent of GDP, the currency has devalued from 18 pesos to the USD down to 40 pesos and all evidence points to further devaluations to come.

The impact of the original $50bn IMF bailout in June has already translated into massive budget cuts in healthcare, education and other social spending; and rises in the cost of electricity bills. That is on top of the anti-worker economic and social policies the Macri government had already introduced, including the pension counter-reform and a threatened counter-reform of the labour law.

The situation is one of desolation for hundreds-of-thousands of working-class and poor families, with people being forced to look for food in rubbish containers, families being disconnected from the electricity supply as they cannot pay the bills, and 20 percent of children suffering from malnourishment in a country that produces enough food to feed all its inhabitants.

The pressure has been building up ever since Macri’s Cambiemos government won the election less than three years ago and started to implement an all-out assault on workers’ rights and conditions. Now, the IMF bailout, delivering further pain and suffering for working people so that the capitalist vultures’ debt can be repaid, could be what makes the whole pressure cooker explode.

The CGT union confederation called for a 24-hour strike on the 25th, with the main aim of releasing pressure and preventing more radical unions from overtaking them. To make sure the strike was as weak as possible, they did not call for any protests or demonstrations. It was a “Sunday-like” strike, as critics called it.

Meanwhile, the two union confederations into which the CTA is currently divided, called for a 36-hour strike starting at noon on the 24th. They called for a mass protest in the capital, Buenos Aires. The demonstration was huge, with half-a-million converging in the central Plaza de Mayo.

All the conditions are being created for a massive social explosion like that of 2001 / Image: Arte y Fotografía

The main problem with the strike is that the trade union leaders, of all tendencies, conceived of it as an isolated action, not as part of a clear plan of struggle against the new IMF-imposed Macri budget, and even less against the government as a whole.

The leaders of the CGT were at pains to insist that what they wanted was for the government to sit down at the negotiating table. The government rebuffed them and refused to even meet with the trade union leaders.

The leaders of the CTAs are slightly to the left of those in the CGT. “Either the economic model falls or these guys must leave government” said Michelis, the leader of one of the CTAs. But in fact, they are limiting the political horizon of the whole protest movement to waiting for the presidential election of December 2019 and then replacing Macri with Cristina Kirchner.

The leader of the truck drivers’ union, Pablo Moyano, who leads a “Trade Union Front” of CGT unions that had supported the call for a demonstration by the CTAs, went as far as saying “the strike is against the IMF, not against Macri”.

Meanwhile, Macri was in the US attempting to get an even bigger bailout from the IMF. He did not get everything he wanted and had to make substantial concessions in exchange. The bailout will be increased from US$50bn to US$57.1bn, less than the US$20bn increase that the Argentine government was expecting. Some of this money will be handed over earlier than originally agreed, as the government has already spent over US$20bn in foreign currency reserves in trying to defend the peso. The IMF also agreed that some of the bailout money can be used in the budget as opposed to going completely towards debt repayment.

The IMF is giving Macri a clear and public backing in an attempt to stop the run on the currency and the flight of capital, but at the same time, this assistance comes with stringent strings attached. Macri has committed himself to a balanced budget for 2019 and a 1 percent of GDP primary budget surplus for 2020. This can only be achieved through massive cuts in public spending, which again will be piled on the shoulders of the working class and the poor. 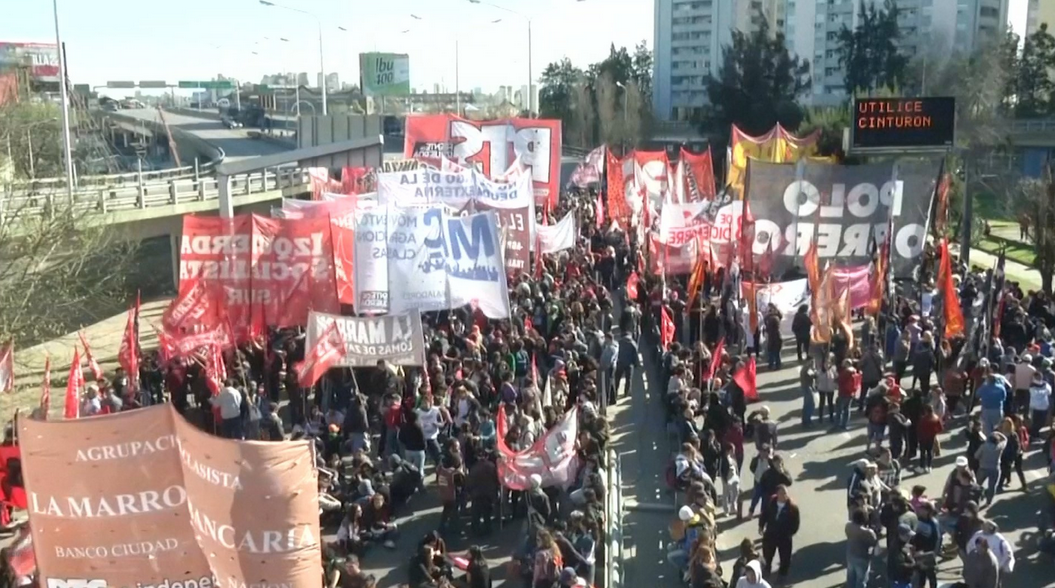 Pressure has been building up since Macri’s government started to relentelessly attack workers’ rights and conditions. Now the IMF bailout could be what makes the whole pressure cooker explode / Image: fair use

The IMF also forced the removal of Caputo, the central bank governor, who will be replaced by Guido Sandleris, someone closer to the finance minister Dujovne and more in tune with the IMF. In fact, one of the IMF conditions for the increased bailout was an end to the policy of defending the value of the peso at all costs. Now the central bank will operate on the basis of a floating foreign exchange within certain bands, and will only be able to intervene if the peso falls below the level of 44 to the dollar.

The latest agreement with the IMF, far from solving the crisis, will aggravate it. The Macri government is increasingly unpopular and weak. All the conditions are being created for a massive social explosion like that of 2001, when the masses entered into the scene with the slogan of “que se vayan todos” (kick them all out). If that has not happened yet is because of the role of the trade union leaders in containing the pressure and letting off steam with one-off protests. On the other hand, the ‘opposition’, peronists (which in fact are propping up the government in parliament), are concentrating all their efforts on a possible Cristina Fernandez de Kirchner victory in December 2019, in effect defending the legitimacy of the increasingly discredited bourgeois institutions. “The zero-deficit budget will be passed with [the help] of opposition votes too,” said Macri from the US.

All out against Macri and the IMF!

We see how, as anger from below grows, the establishment at the top closes ranks. Despite the fact that trade union leaders have no plan of struggle, the pressure is likely to continue to increase. Already railway workers have called a national strike in defence of wages, eroded by inflation. There have also been a number of high-profile sectorial struggles, at the Astillero Río Santiago shipyards, university education, health sector, the struggle for abortion rights, etc.

As it faces growing and more militant opposition, the state is increasing repression. There have been a number of major provocations (a petrol bomb thrown at a police station), arrests of trade union and left-wing leaders, the attempt to prevent a column of the 24 September march from entering Buenos Aires at Puente Pueyrredon, etc. It is clear that the state is preparing itself for a sharp conflict. 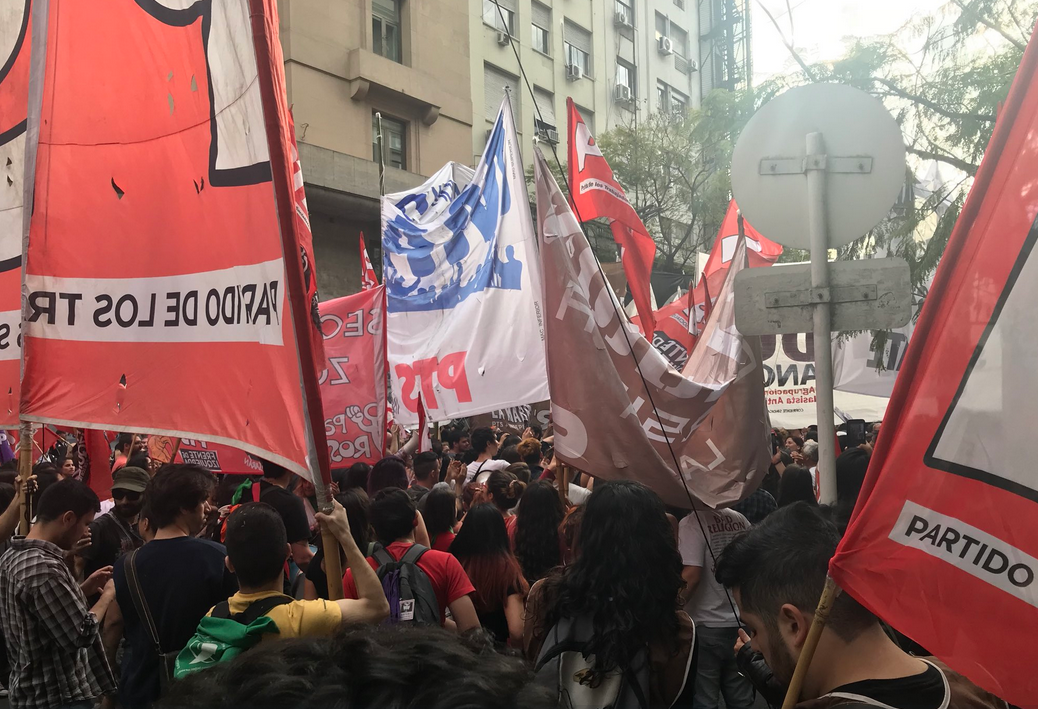 The way forward is for the setting up of workers’ assemblies and neighbourhood assemblies. These rank-and-file bodies, coordinated at local, regional and national level, must then take upon themselves the organisation of the struggle against the Macri-IMF budget / Image: fair use

The comrades of the PO and the PTS, the main left organisations in Argentina, are raising the slogan of a “Constituent Assembly”. As we explained back in 2001, this slogan is not really applicable to the current situation in Argentina. A Constituent Assembly is, in reality, a bourgeois democratic parliament. The main problem in Argentina is not the lack of bourgeois democratic institutions, but rather the crisis of capitalism itself.

As the comrades from Revolución have said, the way forward is for the setting up of workers’ assemblies and neighbourhood assemblies. These rank-and-file bodies, coordinated at local, regional and national level, must then take upon themselves the organisation of the struggle, breaking through the barrier of the trade union leaders.

At the same time, the left needs to find a way of building a united front in struggle with those elements in the workers’ and popular movement who still have illusions in kirchnerism. By fighting side-by-side against the Macri-IMF budget, the left should be able to win over these elements to a perspective of the workers’ taking their future into their own hands, rather than simply replacing Macri with Kirchner.