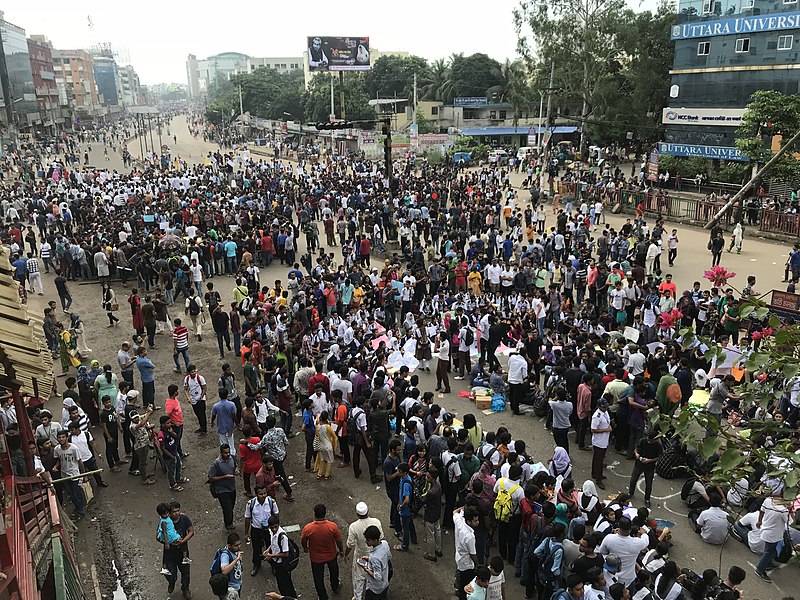 Massive student protests have been ongoing in Dhaka, Bangladesh related to road safety demands. On 29 July, two buses, with unlicensed drivers, crossed a footpath and collided, killing two students and injuring dozens of people. Since then, various neighbourhoods in Dhaka and neighbouring highways to other towns, such as Tangail and Narayanganj, have seen protests by students demanding justice and safer roads.

Students and children as young as 9; their parents and people from all backgrounds have taken the streets in solidarity, blocking traffic and all major intersections, asking drivers to show their drivers’ permits, and protesting against the government’s inaction.

What began as a peaceful, citywide demonstration for the two deceased students turned in a much more bitter struggle in Jigatala, when police authorities threw tear gas and fired rubber bullets at the protesters, injuring hundreds. Hundreds more protesters have been captured by the police and arrested. Major transportation vehicles coming into Dhaka, including intercity buses, have all come to a stop due to the massive demonstrations, with many transport workers going on strike because they do not feel safe travelling in the midst of the protests.

Initial slogans included, “We want safe roads,” “We want justice”. But soon, realising the government’s attitude towards the protests, demonstrators started targeting PM Sheikh Hasina for the government’s neglect of road infrastructure and repressive response to the unrest.

“Students are ran over and killed and our ministers and leaders laugh, ho ho ho!”

As the movement grew, many more demands were put forward:

After a week of peaceful student demonstrations across Dhaka and other cities, the police started attacking the protesters as they were affecting traffic and commuting. Police deny resorting to violence against the student protestors but more than 100 students were injured. 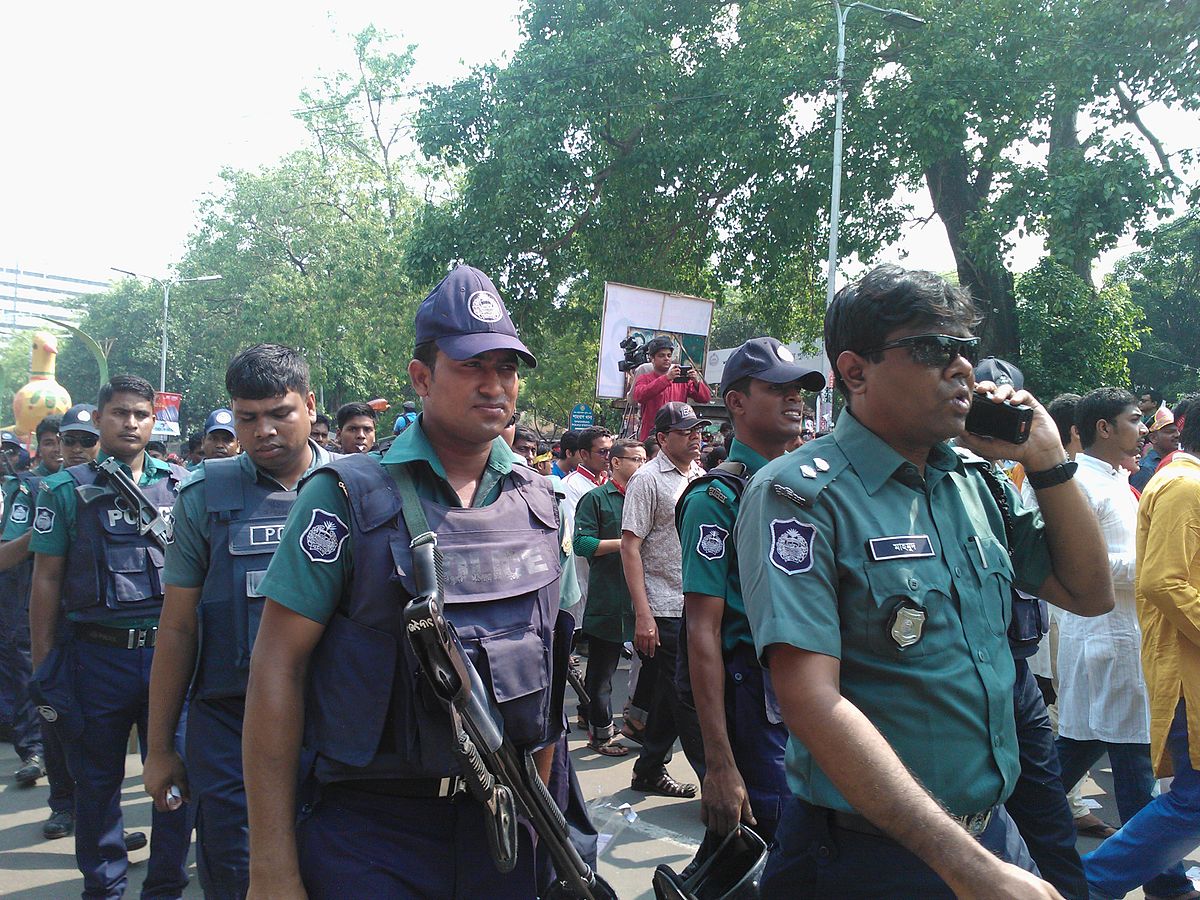 Some female students were allegedly molested and raped by the Bangladesh Police and by the goons of the Bangladesh Chhatra League, which is a student wing of the nation's ruling political party, Awami League (AL). When news of this circulated, students charged down the streets demanding the arrest of the rapists.

Many of the students in the demonstrations are blaming the AL for the poor infrastructure in the city and widespread, rampant corruption across the country. The BCL has been alleged of collaborating with the police to attack photographers and reporters, including the arrest of famous photographer and activist, Shahidul Alam; in addition to attacking students anywhere they can find them.

University campuses have been flooded by the Bangladesh Police and BCL thugs. From 4 August, internet access on cell phones was blocked for 24 hours in response to the protests. As students and organisers used social media, particularly Facebook and Whatsapp, to organize rallies and post pictures of the protests to gain widespread attention, the government asked internet service providers nationwide to reduce internet speed, so that people could not post images and videos online. Many representatives of the AL and the government are denying these allegations and accuse the opposition Bangladesh Nationalist Party of spreading rumours for political gain.

According to a thorough report conducted by the World Economic Forum, Bangladesh has the second-worst roads in Asia, just above Nepal, notorious for its devastating earthquakes in the past. Since 2005, the World Bank has invested more than $28bn, particularly in the country’s infrastructure. However, even in the case of roads that have been directly built by World Bank-funded projects, like the Dhaka-to-Sylhet highway, some basic safety features – such as crash barriers, pedestrian footpaths, traffic lights or speed controls and the elimination of central reservations to protect drivers from head-on collisions – have been neglected. 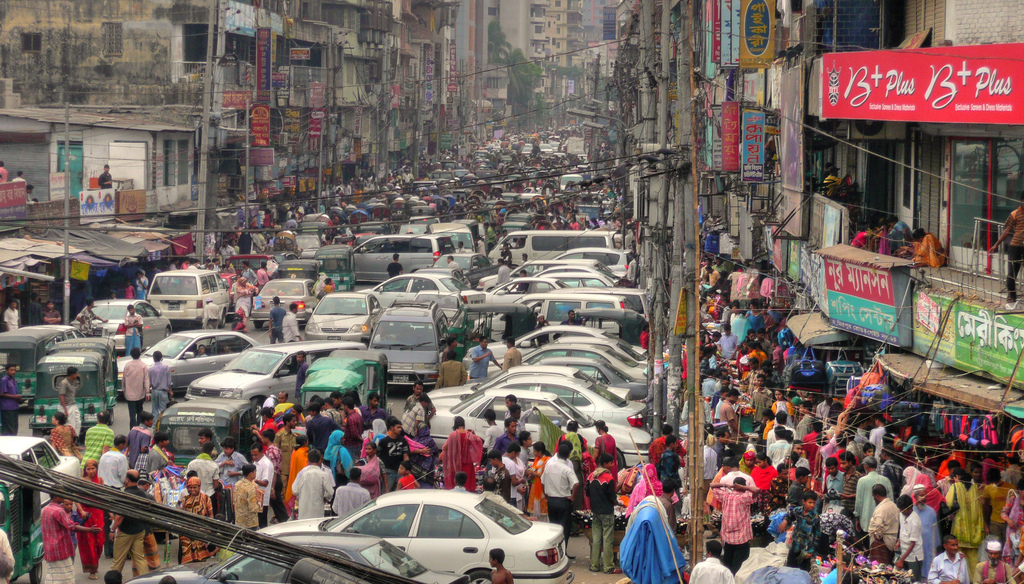 Bangladesh has the second-worst roads in Asia, with thousands of road deaths and millions of working hours lost daily to congestion / Image: joiseyshowaa

The construction cost per kilometre of road is between $2.5m and $11.9m, which is the highest in the world, but even such huge costs do not positively reflect the quality of the road construction.

One of the major problems associated with poor road construction is that each highway is controlled and privately built by various construction firms. Politicians interfere with the firms and allow them to take over certain areas, which means there is a massive problem with inefficiency in construction, corruption, and a lack of accountability and monitoring of roads and highways.

With poorly constructed roads and no safety regulations, it shouldn’t be surprising that Dhaka has some of the worst traffic congestion in the world, with almost 3.2m working hours wasted each day as a result. Traffic jams also drain billions of dollars from the city’s economy annually.

Government figures for road deaths and injuries are grossly underestimated. According to the much-more-realistic estimate by the World Health Organisation, in 2013 there were between 17,000 and 25,000 deaths. The official figure for that year was just 3,296. This situation easily explains why one road accident too many can suddenly trigger such a huge mass movement, which is quickly escalating and leading participants to question the corrupt government and the role of the police and the state. The movement is beginning to react against the whole establishment.

Roads are not the only example of Bangladesh’s crumbling infrastructure. Dhaka is also notorious for shoddy building construction, which was the main reason for the collapse of the Rana Plaza garment factory in 2013, where more than 700 workers died. However, Rana Plaza is just one of the many examples of the country’s dreadful construction. Many garment factories, such as Gazipur in 2013, and regular commercial buildings, have become uninhabitable due to their poor quality. 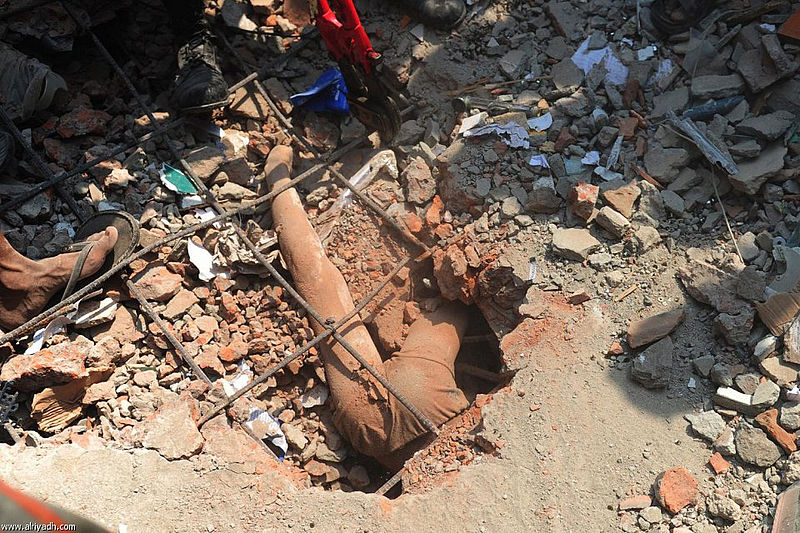 Bangladesh's shoddy building construction was the main reason for the collapse of the Rana Plaza garment factory in 2013, where more than 700 workers died / Image: rijans

Many of Dhaka’s infamous garment factories, including those under the Walmart umbrella, still have not gone through the safety and labour regulation procedures to make sure that their supplier factories uphold high labour standards and maintain safety procedures. In fact, the regulations and accords that were passed after the tragedy in Rana Plaza play little to no role in the improvement of the garment workers’ conditions and whether the buildings are safe enough for everyday use.

It is not only factories that are built poorly. The emerging hubs of multi-storey shopping malls, hospitals, residential houses, etc. often do not go through the proper channels in terms of fire and parking safety. In fact, after the Rana Plaza collapse, a study was conducted that stated that only six-out-of-20,000 buildings built since 2008 went through the safety clearance required by law. While formal efforts have been made to guarantee adherence to safety procedures, they are completely ineffective. Whether or not buildings are being submitted for safety clearance (regardless of how effective these controls would be) still depends on the interest of each private investor and the estate management.

Government part of the problem

Since Sheikh Hasina came into power for the second time in 2009, little to no efforts have been made to provide better road infrastructure and ensure safety. In fact, the entire administration is riddled with scandals, from the poor management of dealing with the Rana Plaza factory collapse to open cases of corruption, with several MPs of the party, along with foreign firms, accused of syphoning off money from the World Bank, participating in scams etc. 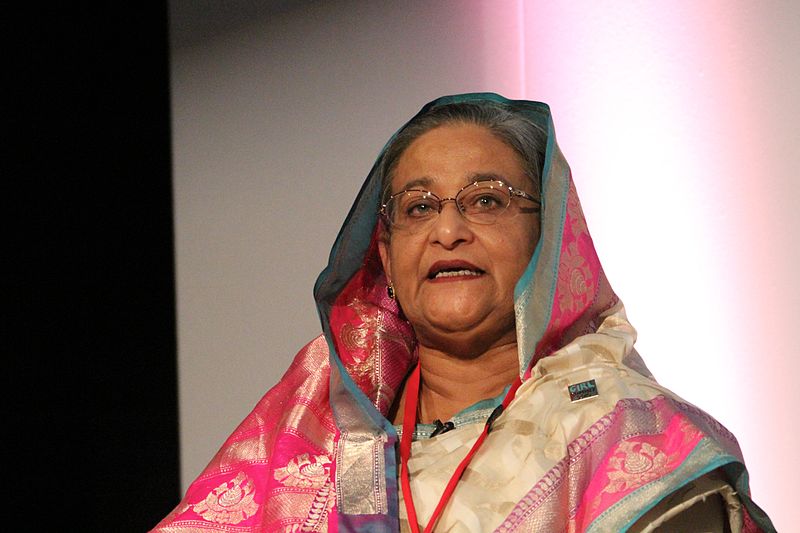 Since Sheikh Hasina came into power for the second time in 2009, little to no efforts have been made to provide better road infrastructure and ensure safety / Image: Russell Watkin

This situation is exposing the deep, rotten corruption of the Awami League government, as in the Padma Bridge Scandal in 2012, where several Awami League MPs were accused of asking for large amounts of money from the Canadian construction company SNC-Lavalin in order to assign them the contract. While this particular case was dropped, many MPs, from both major political parties, have been exposed for money laundering via Swiss banks.

It is important to note that the current mass demonstrations for road safety are not an isolated event, but rather the continuation of nationwide protests over the recent period. Earlier this year, until July, there have been ongoing demonstrations by newly graduated students and unemployed youth against the quota system for government jobs. Hasina's administration promised to create at least 2m jobs every year, but with a workforce growing faster than the availability of work, officially 10.3 percent of the youth are unemployed. The government promised to provide secure jobs in civil service positions. In order to address the large number of applicants, the Awami League government introduced a quota system, which was supposed to take in more applicants.

At the protests, the students demanded the end of nepotism and cronyism in securing government jobs and that employment should be based on the applicant’s merit and not who has personal connections with the Awami League. While the Awami League leadership is calling the anti-quota reform and road safety protests a conspiracy led by the opposing BNP, all of these protests only expose the rottenness of the Bangladeshi political establishment. Of course, it is true that some factions of the BNP have been trying to appropriate the movement as part of their own political agenda, but the truth is that the protesting students have become fed up with both the major political parties because of their rampant corruption and their embroilment in the interests of big business. 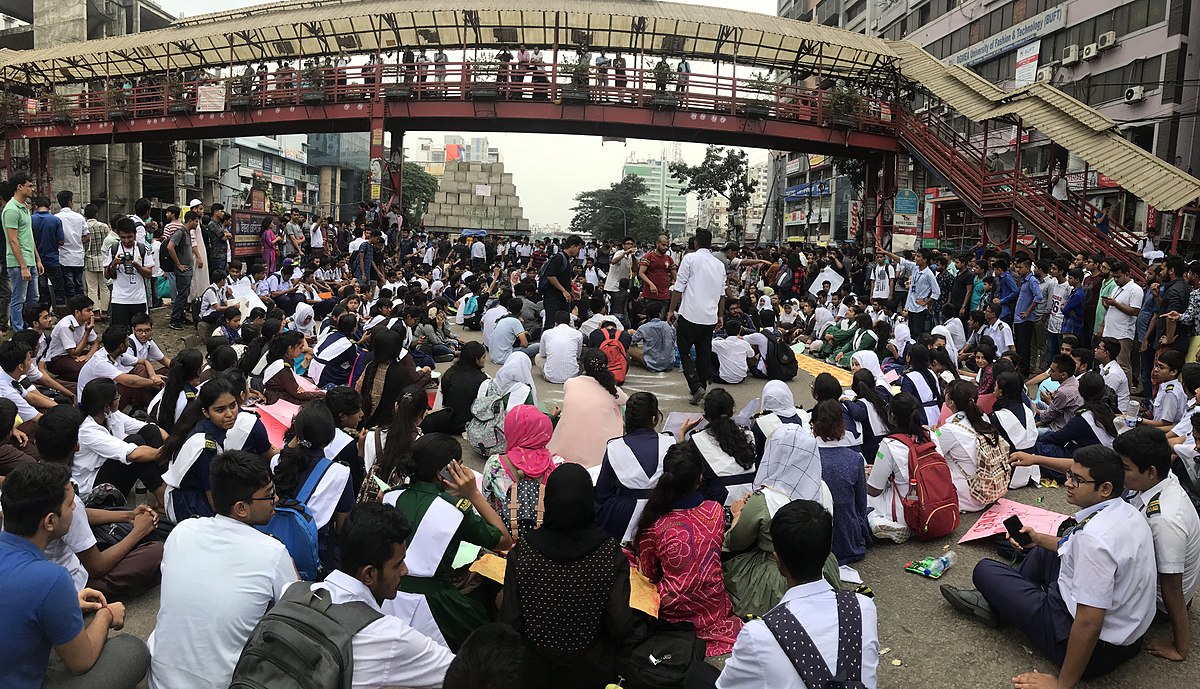 The current mass demonstrations for road safety are not an isolated event, but rather the continuation of nationwide protests / Image: Asivechowdhury

The Awami League and Bangladesh Nationalist Party are not posing any alternative to the present situation. They jostle with each other just for the sake of winning lucrative positions and parliamentary seats. No surprise that many workers and young people have generally associated the establishment with corruption and being rancid to the core. The political establishment promises protection for the students and jobs for the youth; but no effective laws nor reforms to realise these ambitions have been ever implemented. According to the polls, more than half of the youth population have expressed dissatisfaction with the current political establishment in Bangladesh.

The problem currently is that there is no political party representing the interests of the working class and youth in Bangladesh. The fact that the Bangladeshi government is unable to give an answer to a simple problem of poor road infrastructure and safety only exposes the crisis of Bangladeshi capitalism. The vicious response of the Awami-led regime in capturing students, sending thugs to rape and assault protestors, only reveals the ugliness of the system.

The way to ensure safety in the streets is to break with the rotten capitalist system and fight for a socialist future. A socialist Bangladesh would mean the nationalisation of the most important levers of society, where infrastructure would not be left in corrupt private hands. No child should fear crossing the street because there is no clear footpath and because of reckless drivers. Only transforming society for the betterment of humanity can bring an end to these horrors.