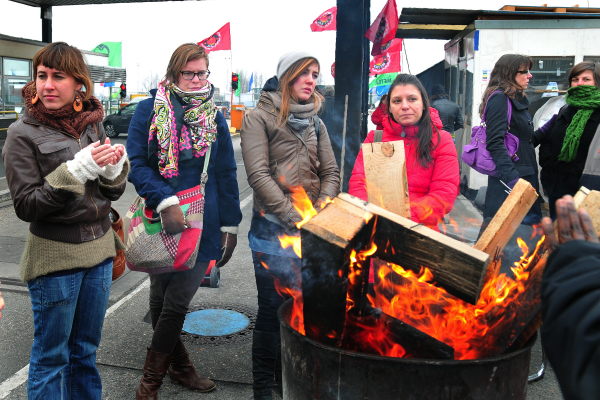 An appeal has been issued for the nationalisation of the Opel plant in Antwerp under workers’ management, together with the call to develop the factory along eco-friendly lines, producing alternative forms of transport and defending jobs at the same time. Support the campaign!

The battle at the Opel plant in Antwerp is about more than just saving jobs. It is also about the kind of economy we want, and about a socially responsible use of technological innovation. It is therefore not just a battle of the Opel workers alone, but of all of us, and deserves the support of a broad social and political front.

The auto industry in the past one hundred years has been an important driver of both employment and technological innovation. However, the era of fossil fuels is coming to an end and we stand for an industrial-technological revolution. It cannot be right that Belgium is being deprived of a major asset, namely an excellent location for an ultra-productive assembly plant. Opel Antwerp is not a coalmine but a part of the future of the industrial development of Belgium. The political authorities should therefore not limit themselves to supporting the union's short term struggle to preserve the Opel factory inside or outside the context of General Motors. While that struggle should be conducted and supported, to govern it also means having foresight.

For years, important sums of money have been offered to the automotive industry, both from European, federal and regional levels. Today we say that these funds were already a form of "government interference". So therefore our politicians not only have the right but also the duty to take the lead in developing a plan B to ensure the future of Opel in Antwerp.

Such a plan of production could become an important platform in the development of a transport policy based on different ways of using and servicing cars: namely to refocus production into a sustainable and ecological productive car plant.

Several options are open and can also be combined: we should recall that a green-friendly plant could be established that assembles cars for different brands, just as it does in Nedcar Netherlands or that produces electric cars, more than we are presently achieving in this field of scientific and technical expertise.

A publicly controlled production unit would be the best guarantee of making the right investment choices and maintaining full employment at Opel Antwerp. Production units where users' associations and workers, together with the unions, would exercise control over production, would also prove that democracy within the workplace can not only exist but can even be a source of efficiency. A genuine workers’ participatory management could exist without adverse social effects such as the intensification of labour and the constant job insecurity or other negative aspects imposed by the dictatorship of the shareholders.

Both the Flemish and federal governments have saved the banks, why could they not save Opel Antwerp? Partially the factory is already the property of taxpayers in Antwerp, as 28 million Euros have been granted to the company in public subsidies since 1996. Furthermore, the Flemish government has budgeted 500 million Euros in aid for 2010. State owned investment societies that could create a public holding company for the automotive industry already exist and they could own the factory.

Therefore we, the signatories,

- Request that the government take the lead in implementing the only real practical Plan B: nationalise Opel in Antwerp and promote sustainable ecological car production.

- Call for the building of a broad social front to support this demand.