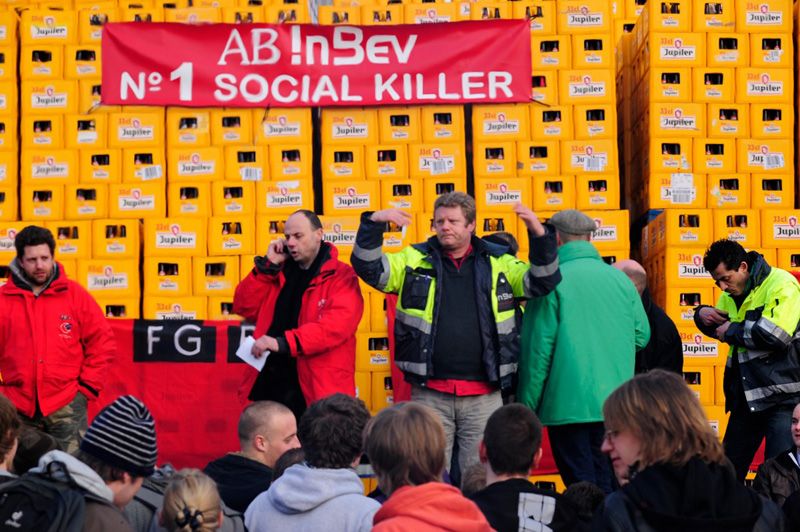 Recent redundancy announcements in Belgium have provoked a very militant response from workers. The case of the InBev brewery workers is one example, as is that at Carrefour. Also a spontaneous strike on the railways after the recent fatal rail accident reveals the real mood within the Belgian working class.

Last year's financial crisis hit Belgium severely, leading to the two major national banks being sold off French and Dutch financial institutions, all financed by the Belgian government. Since local politicians started saying that 2010 would be the year of the recovery and that Belgium was not Spain or Greece we have witnessed a massive wave of lay outs.

We have already reported on the Opel plant in Antwerp (and the campaign that IMT supporters have helped develop in favour of its nationalisation). But there has also been the case of InBev (the Belgian-Brazilian multinational brewery) that was planning to sack 300 workers despite making millions in profits over the past year. The workers immediately reacted by blocking the plant and succeeded in forcing the company to withdraw its plans. The InBev created a wave of sympathy and solidarity amongst workers and the general population both in Wallonia and Flanders.

This comes at a time in which we are witnessing a general increase in social volatility and sensitivity of public opinion. When last week 19 people were killed in a train accident and hundreds more commuters and train workers were injured, a spontaneous wave of strikes hit the railways. It effectively paralysed at least half of the Belgian network for a whole day. Train drivers and other railway workers were not just expressing their emotion and condolences with the victims and their families; more importantly they reacted with indignation at the management's responsibility for not investing in security measures and the dangerous work pressure the drivers in particular have been put under. The overwhelming majority of commuters far from condemning the strikers sympathised openly with this action. Not only do commuters fear for their security but the descriptions of intensification of work pressure is recognisable by other workers active in other industries. Stranded commuters, students, etc., understood the railway workers were also striking for them and the prevention of future rail crashes.

This week it has been the turn of Carrefour (the French owned distribution giant) that has announced more than 1600 job cuts. That figure could eventually increase to 3000 say the unions. In Belgium Carrefour has two different labels (GB and Carrefour). This wave of lay offs come on the back of a strike that took place last year when they tried to open a third brand owned by Carrefour with different terms and conditions than the other two companies. The management tried the divide and rule but a one-day strike stopped the plans; now they are back on the offensive.

On February 23 they announced 1687 layoffs and the closure of 21 stores. Carrefour's announcement is disgraceful if one thinks that less than 12 months ago they were planning to open a mega-shop near Bruges. Carrefour Belgium made €381 million in profits last year on which they paid tax of €33,225, which is a rate of 0.008%. And during the InBev strike the workers were astonished at the arguments of the bosses because their accumulated profits amounted to almost €1.6 billion. 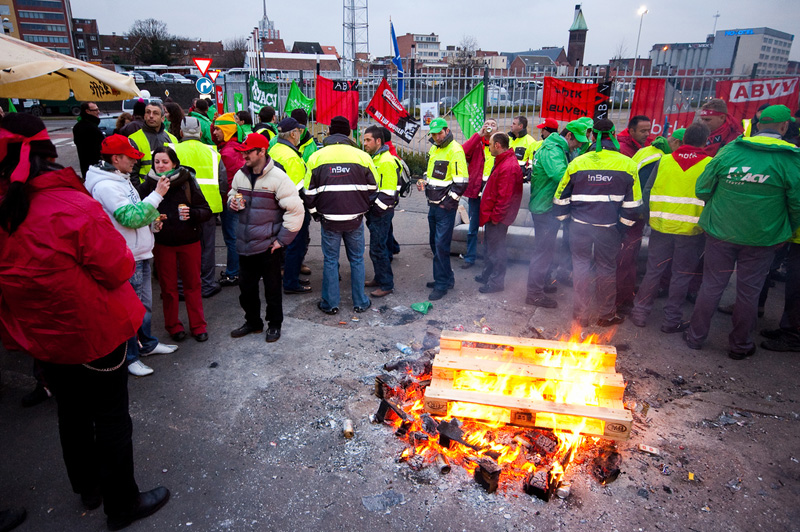 Striking InBev workers at a picket. Photo by Jan Slangen. Carrefour Belgium announced that it has been losing market shares to justify the restructuring of its operations, but they conveniently forget that they still made a profit in 2008 of €66 million. Of course they will fiddle the figures to justify the need to sack workers.

On Wednesday, February 24, the workers in many shopping malls owned by Carrefour decided not to open the doors. This direct and spontaneous action by the workers was the consequence of the rage that exists amongst the employees, but it actually indicates to all workers the way to avoid these massive layoffs. It was the second wave of spontaneous strikes in a period of just a few weeks. According to a full time official of SETCA (the socialist union that organises the distribution sector), “in Brussels more than half of the shops were closed”.

There is a clear need for bold action by the trade union movement to defend these jobs; the bosses are trying to put the burden of the crisis on the state in the form of unemployment benefit. They should not be allowed to get away with murder. They have tried it at InBev and the struggle of the workers showed that redundancies can be stopped. Carrefour is the second big offensive, and the fightback it is more complicated as the 1600 redundancies are spread out amongst many different shops. The unions should strive for a general mobilisation in the sector of food and clothes distribution; otherwise we risk an even more generalised wave of redundancies. The spate of wildcat strikes has forced the unions to call for a total strike at the Carrefour shops. This strike on ‘strategic Saturday’ (Saturday, February 26 – workers had just received their monthly wages and were shopping that day for the whole month) completely paralysed 117 Carrefour supermarkets. This clearly shows the strength of the workers and their readiness to fight back against these attacks.

At the same time the Belgian left needs to step up its activity to achieve the nationalisation of Opel and the stopping of the redundancies in Carrefour. We cannot separate the two struggles as they are linked by this economic crisis that the bosses are trying to make the workers pay for.