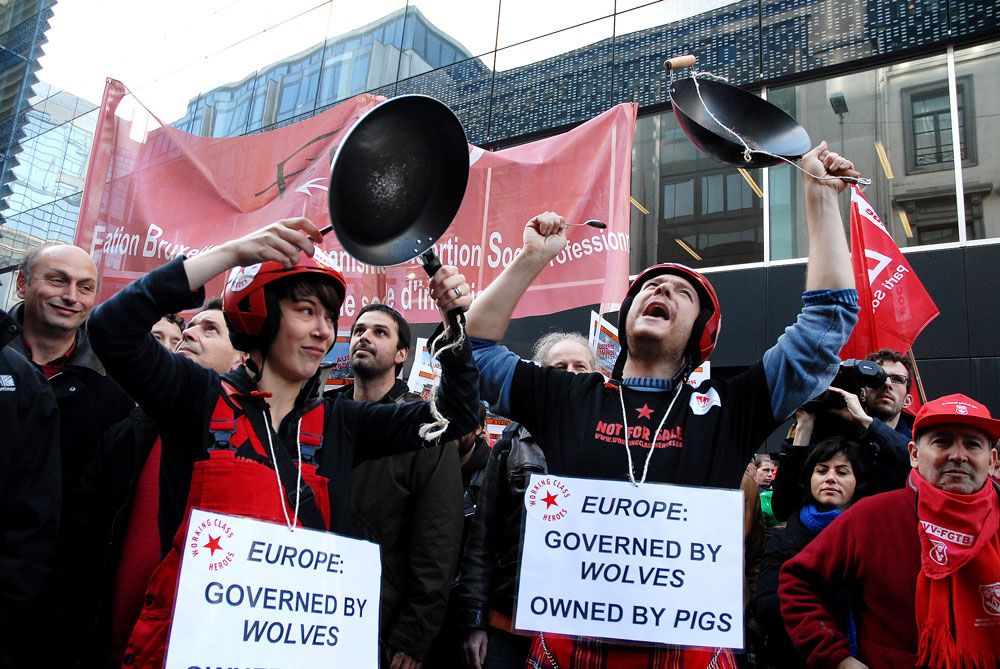 The bourgeois in Europe noted that while the response to yesterday’s day of action called by the European trade unions was mainly concentrated in the South (Portugal, Spain, Italy and Greece) there was one exception in the north, Belgium, which saw significant mobilisations, particularly in French speaking Wallonia.

The socialist railway workers’ and the Brussels/Walloon metalworkers’ union spearheaded the strike action on 14 November (14N) in Belgium. They were joined by public service workers in the French-speaking part of the country (Wallonia), the municipal bus drivers and five regions of the socialist trade union confederation, (but with a less widespread movement in Flanders). All of the above downed tools yesterday. Demonstrations were held in the big cities. The unions near the French border sent some thousands of activists to the demonstration in Lille (France).

For most of the day a big majority of trains were either cancelled or were seriously delayed throughout the whole of the country. It was a strong display of strength on the part of the union in the face of vicious media attacks, the pressure of the bosses against the right to strike and also the lukewarm preparations for the strike on the part of a section of the same railway workers’ union. In Brussels, a crucial junction in the highly centralised railway system of the country, around 300 council workers – also on strike – strengthened the pickets and blocked the two main stations by standing on the rails.

The socialist and Christian trade union confederations organised a walk from embassy to embassy of those countries most affected by the crisis (Greece, Spain and Italy) and finally delivered a “Nobel Prize for Austerity” to Barroso of the EU Commission. Despite the fact that this demonstration was mobilised on the basis of a “maximum quota” of participants of 150 members from each union, more than a thousand were involved, to the irritation of some of the national union leaders!

In the afternoon the Christian trade union confederation of private sector employees (CNE), furious about the lack of a clear call for joint mass action of all the unions, organised a very lively demonstration in the “European quarter”, where the EU institutions and bosses’ lobby groups are based. Most of the 1500 workers present were young shop stewards and were very willing to show their anger by attacking the EU buildings with eggs, paint and anything else they could get their hands on. At the end of the demonstration the trade union leaders complained about the lack of joint action and the lack of a clear call for a general strike in Belgium and at EU level. It must also be said, however, that the official call of both the socialist and Christian trade union confederations was for undetermined “action” and “covered” only individual strike action but refused to issue a clear call for wider strike activity.

In the Northern part of the country (Dutch speaking Flanders) the union leadership limited its involvement in the European Day of action to some lunchtime gatherings, distributing leaflets and assemblies with workers in the factories. Nevertheless, some factories did come out on strike yesterday in Flanders, also despite the lack of a call to action. It is also true that the mass demonstration in solidarity with the Ford workers at the Genk plant also absorbed most of the attention of the workers in the North. 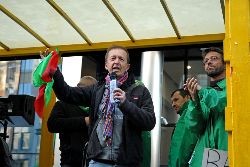 Erik Demeester speaking at rally. Photo: Vinciane ConvensA leading shop steward of a big factory in Antwerp told us that the difference in mobilisation between the Northern and French part of the country was not due to a lack of internationalist consciousness in the North. It was mainly due to the enormous divisions at the top of the unions that no real action was taken. The cacophony of contradictory instructions coming from the national leadership paralysed a layer of activists. As he said, “We are still able to win some small concessions from the bosses, but inside the union itself we always seem to lose.” This, however, will soon inevitably come to an end.

This day of action in Belgium, however, also revealed two important things. One is the strong will of a layer of activists and leaders in the union to go on to the offensive against austerity with a serious plan of action, including a general strike. The consciousness of the capitalist nature of the EU in the country that hosts the EU institutions is also growing. Secondly, what was evident was the enormous perplexity and disarray in the leadership of the unions. These leaders are faced with years of brutal attacks on the part of the bosses and they can no longer use the so-called “Belgian social model”, i.e. one of social partnership and compromise, as a tool to limit the damage. Rarely have we seen the Belgian trade union leaders so divided and confused about what to do next. This prepares the way for more open political internal differentiation and the development of the beginnings of an organised opposition, a left wing within the trade unions in the coming period.