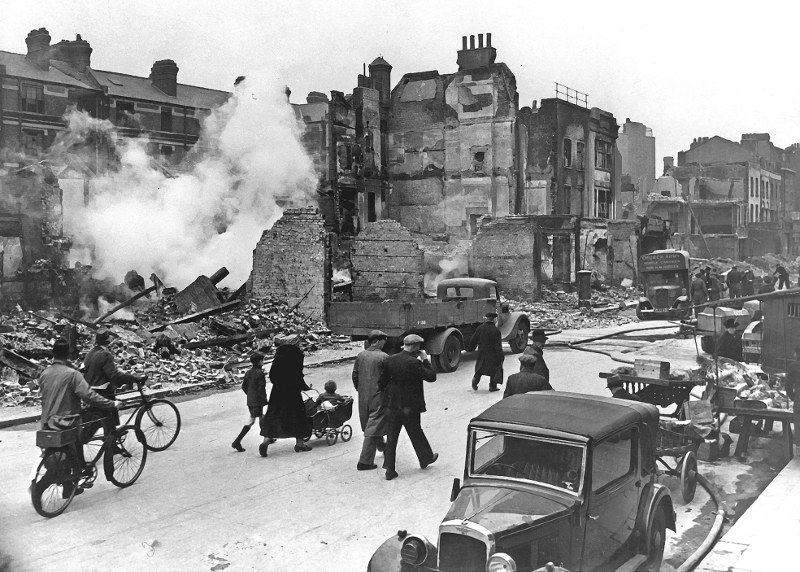 Seventy years ago this week the “phoney war” well and truly ended and the mass bombing of London and other keys cities by the Nazi Luftwaffe began. The Blitz, as it was to become known, cost the lives of thousands of workers as the nightly bombing raids from Germany laid waste to both houses and industry.

These unremitting raids would continue for over a year until the need to divert resources on the part of the German High Command to deal with the war in Russia led to a reduction in the levels of bombing on UK targets, although later on in the war, the introduction of unmanned rockets - the V1 (the so-called Doodlebug) and the larger and more silent V2 - would again cost many lives on the Home Front.

Since the Luftwaffe targeted cities - not only to destroy industry, docks etc., but also to try and demoralise the working class population - it was workers who took the brunt of the attacks and suffered the greatest losses. Beforehand, little effort had been put into trying to defend working class areas from the likely effects of the nightly raids. The best the government could come up with was guidelines as to how to hide under tables and in cupboards - decades later, with “Protect and Survive” the authorities would issue the same useless advice to prepare us for a possible nuclear attack - and the option to buy one of the so-called Anderson Shelters to stick in your garden. But these were not free and only the very poorest could get assistance in paying for one of these shelters, since profit making continued - war or no war! However, these shelters were derided by many since they were nothing more than little sheds, which would become their main use after the war. The only benefit of being in one was that if a bomb hit nearby then you could be dug out easily. As for surviving a direct hit... forget it. A campaign was launched to open up the Underground tunnels and stations in London at night to provide a version of the otherwise non-existent deep shelters which could have provided some reasonable protection from the bombs. The authorities initially resisted this demand as being too much trouble but were later forced into implementing it to pacify growing discontent amongst the masses as to why they were not getting better protection.

The only reason that the effects of the Blitz were not more profound was that the Luftwaffe failed in the main - with the obvious exception of the mass raid on Coventry - to carry out an attack that was concentrated enough, in both physical area bombed and the time scale of the raid, to completely overwhelm the fire and medical services and create the conditions for a total collapse of morale on the part of those affected. This option was noted by the British armed forces, who feared such a concentrated attack above all else, and used later in the planning of the RAF bombing raids on Germany - hence the decimation of Dresden and later on Berlin.

One very interesting point is raised in the 1940 dated article reproduced below, where Ted Grant refers to the need to arm the workers to create a mass force - a workers’ militia - to defend the towns and cities against possible Nazi attack. The response of the government would be to establish what would become known as the Home Guard. Mainly known today through the endless reruns on TV of Dad's Army, the Home Guard was never to be properly armed or prepared - which would have involved training in the sort of guerilla techniques employed by the French Resistance, something the military chiefs were wary of lest workers used them against the bosses later on - and would have provided little resistance should a full invasion by the German forces have taken place.

If you cut through all the stuff about the wartime spirit etc. which comes up each time we hit an anniversary relating to WWII, then we can see that, despite all the propaganda, class society continued unabated throughout the duration of the war. The rich got richer, profits were made and enjoyed by the few, and workers continued to be treated like mud. Then, as now, the only real future for the masses is through the struggle for socialism and the removal of all the ruling classes who have caused such misery to so many.

Below we reproduce an article by Ted Grant, published at the time (1940) and now available in Ted Grant Writings Volume One, which deals with the issues raised by the war from a workers perspective:

Workers Must Be Armed Against Capitalism