Details
our correspondent in Santa Cruz, Bolivia
08 May 2008

The mass media in the west continue to pump out lies about what is happening in Bolivia. They claim the oligarchy in Santa Cruz has won support from the people for "autonomy". We provide the facts that show the opposite is the case. Reaction is spurring on the masses to step up their revolutionary offensive.

On May 4 the oligarchy in Santa Cruz had prepared for a big celebration. Their dictatorial and "neo-liberal" autonomy was about to be "approved" - approved, that is, by the "people of Santa Cruz". The official results were that there was a victory for the "yes" vote with 85% and only 15% for the "no" vote. The ruling elite of Santa Cruz, Bolivia's economic centre, celebrated the result all night long. But behind the fine numbers, there is another reality:

What is the situation in Santa Cruz city?

In the last couple of months the propaganda of the oligarchy has been enormous. They put all their efforts into securing victory at this illegal referendum. In all the media one could hear about the blessings of "self-determination". But no part of the media has bothered to explain the actual content of the oligarchy's autonomy-statutes. Reading the statutes one understands completely how reactionary they are.

Some of the most significant points are:

Apart from that, the regional government and the so-called Santa Cruz civil committee have given the fascist forces who they are basing themselves upon, a free hand. The most extreme elements talk about the need for ethnic cleansing, to throw out all those in Santa Cruz who come from Bolivia's "altiplano" (the highlands) and who do not abide by the norms of the oligarchy.

The day before the referendum, small shopkeepers in the city centre, La Ramada, reported that leaflets had been distributed in the neighbourhoods, stressing that "now the collas have three days to leave Santa Cruz". "Colla" is the name used for those who come from Bolivia's altiplano, [i.e. indigenous people] who make up nearly half of Santa Cruz's population and the bulk of the small shopkeepers in the markets. 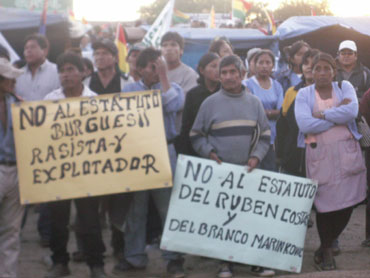 In the poor "Plan 3000" neighbourhood resistance against the referendum was so big that people went onto the streets to challenge the fascist gangs. Large quantities of ballot papers were burnt when the people discovered the huge electoral fraud that had taken place. They had uncovered quantities of ballot papers that had been marked with a "yes" vote before the elections had even started.

On Sunday evening Evo Morales went on national TV where he declared that the referendum of the oligarchy has been a total failure. The truth of the matter is that outside Santa Cruz' fashionable city centre and the rich neighbourhoods, this challenge of the oligarchy has been met with resistance. This is even revealed in their own official figures - with a 40% abstention rate in the whole department and more than 50% outside Santa Cruz city centre.

The question is: what will happen now? In the international bourgeois press nothing has been reported about the real situation that we have pointed out in this article and our previous article, published by the Marxist Tendency in Bolivia. The media is presenting the situation as one where the country now is split in two, with an eastern part which does not agree with the changes that Evo Morales is trying to impose. It is this distorted version of the truth that the right wing is now trying to put their bets on. And with this they are trying to stifle several revolutionary struggles on the part of the Bolivian working class.

But as some peasants of the El Torno province in Santa Cruz said yesterday: "Why didn't these people declare their autonomy when they had power during the period of General Banzer?" and added; "this autonomy referendum is useless for the poor".

At the Cabildo in El Alto the big assembly voted for a resolution which points the way forward for the revolution. One of the most important points in their resolution is the demand for the nationalization of all the factories and companies of the oligarchy. This is an essential point. The Bolivian working class has shown its strength. It is now decisive that concrete measures should be adopted to wrestle the economic and political power out of the hands of the oligarchy.

On May Day, Evo Morales nationalised the big telecommunications company ENTEL wiuth a decree which gives the state a majority of the stocks in the company. The same happened to several oil companies, who have lost their control over production. However, the message yesterday from the masses, the same masses that put Evo in power, was clear: The government must put aside all efforts to dialogue with the oligarchy who are only interested in regaining their political power throughout the country. "The contrasts are as sharp as ever - now the revolution must move to victory!"