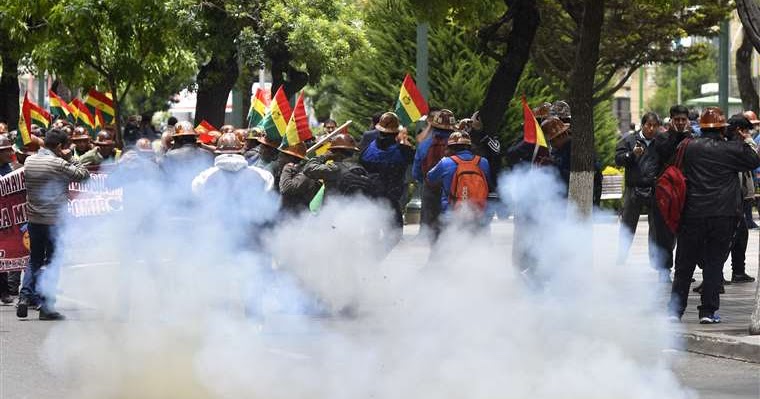 The Bolivian general election, on 20 October, produced a victory for Evo Morales of the ruling MAS party, but on a much-reduced majority, revealing how the class collaborationist policies of his government have alienated sections of its traditional base of support. The fact that Evo avoided a second round by the smallest of margins was used by the right wing to claim fraud and start a campaign of mobilisations on the streets. While there are different elements involved in the protests, in the last few days the initiative has passed to the camp of the “civic movement”, organised by the most reactionary elements of Bolivia’s capitalist oligarchy, based in Santa Cruz. The Bolivian comrades of Lucha de Clases have issued this statement about how to fend off the coup threat.

The announcements of the civic leader from Santa Cruz represent a qualitative step in the direction of a coup. Luis Fernando Camacho, a key figure in the opposition, has called for the "peaceful" taking over of state institutions – which at the time of writing has already begun in Santa Cruz – and the extension of blockades to the country's borders. But the biggest surprise has been the announcement of his participation in a march on Tuesday in the capital city of La Paz, that intends to reach the Plaza Murillo to demand the resignation of Evo Morales. This is an open provocation, which by all appearances is not directed only at the MAS and the government.

On Monday, the Military High Command issued a statement, the first since the beginning of the crisis, stating that they “will ensure the maintenance of democracy", and a reminder that the military institution "is subject to military laws and regulations, they are based on the cohesion of their structures, their mission and vertical organisation, based on fundamental principles of discipline, hierarchy, order and respect for the Constitution”. Will the Armed Forces defend the democracy of the civic movement, or Evo's? The one that makes Evo the commander in chief, or the one that prevented his re-election? All this deliberately ambiguous language and Camacho's call to the military top brass means that the Armed Forces are pulled in different directions and, at least among the general staff, they still do not know which side they will support.

This provocation is clearly aimed at the armed forces and we cannot risk waiting for the facts to clarify whether Camacho is launching an adventure, as [MAS] Senate president Salvatierra maintains, or whether this is the beginning of the coup. In the current state of affairs it is clear that, if Evo is overthrown, it will be at the hands of Camacho (that is, the most conservative and reactionary wing of the Santa Cruz bourgeoisie) and the gorilas [coup-plotting reactionaries].

The COB [Trade Union Central] has called a march for this Tuesday in La Paz. Union Federations of teachers, urban and rural, from across the country, in addition to factory workers in Cochabamba, La Paz, Sucre, have made public their rejection of this call. As we have pointed out, the bureaucratic methods of the COB and its servitude to the government, prevent the united mobilisation of the working class. The COD [Department Workers’ Union] of Oruro, under pressure from MAS operators, has given urban teachers (who are part of the “civic” movement) 24 hours to return to work, under the threat of clashes. Thus, the working class continues to divide.

An accurate picture of the mood among workers in the country can be seen from the assembly last night of the Huanuni miners' union: the largest mine workers’ union in the country. Huanuni, by decision of its assembly, will strengthen the miners’ presence in the mobilisation against the threat of a coup. The debate showed that workers need to confront each other. A couple of interventions, which were booed, indicated that the only solution to the conflict is new elections. Some called for the defence of "our process of change", without raising particular enthusiasm. Many instead reminded the assembly of the unresolved problems about wages, social benefits and organisation of the company. Others called to voluntarily join the decision to travel to La Paz to prevent a new "21060", the [1985] decree that opened the way for “neoliberalism” and the privatisation of mining.

The Huanuni rank-and-file comrades we talked to confirmed the obvious reasons for skepticism among the workers. The MAS has resorted to the Huanuni union on other difficult occasions, but the bureaucratic management of the company, and its economic management by the state, does not allow workers to resort to the MAS to solve their problems with the company. In addition, the strategic alliance with the MAS has corrupted their union and deprived them of this tool of defence and struggle. Among some miners, this is hard to leave behind. Thus, the general mood of the assembly was one of searching for an independent position as miners, which the bureaucracy is not able to provide.

If Evo falls and a transitional government is appointed for new elections, this could only be done with the support of the armed forces. In this scenario, Huanuni could be militarised, and in any case, the first objective of a new government would be to do away, by any means necessary, with the mining unions of Huanuni and Colquiri. This is understood by most workers, but they are asking how to avoid a return to business as usual – that is, how to defeat Camacho and change Evo's policies.

The answer to this question is obvious: workers must fight the coup with our own methods. In the first place, assemblies must be convened, such as the one at Huanuni, in which mobilisation committees are formed with democratically elected and recallable delegates chosen from among the most militant workers. We must also demand:

Only in this way, with the formation of militias and extending our control over the economy, can we defeat the coup and at the same time end up in a position to prevent the continuation of the MAS’ class collaborationist policies, which are taking us to the edge of the precipice.