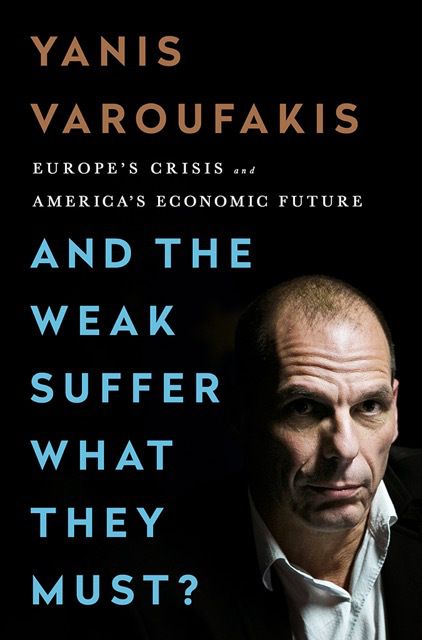 In his latest book, And The Weak Suffer What They Must?, Yanis Varoufakis (“the most interesting man in the world” according to Business Insider) offers a potted history of post-war global finance, the rise of the euro, and its spectacular fall, along with his own prognosis and solution for the interminable crisis of European capitalism.

As is explained in the book, the rather clunky title comes from Thucydides’ Peloponnesian War, in which the vainglorious Athenians assert their right as victors to do as they please with the vanquished Melians: “The strong actually do what they can and the weak suffer what they must”. The Melians’ reply is that it is in the interest of the strong to show mercy to the weak lest their own fall “would be visited by the most terrible vengeance, watched by the whole world” - an argument which Varoufakis reproduces in relation to the treatment of Greece by their mighty German creditors.

For Varoufakis, the key to redressing the contradictions and imbalances implicit in the Eurozone (and any system of fixed exchange rates for that matter) is for “the strong”, i.e. Germany, to rule in “enlightened self-interest” by providing a stimulus to the Greek economy (and all other deficit states) rather than the current programme of devastating austerity.

The example given by Varoufakis is that of the intervention of the United States’ Federal Bank to prop up the state of Nevada after the 2008 crash. It is the lack of this “political surplus recycling” mechanism which, according to Varoufakis, has condemned the Eurozone to its present crisis-ridden state.

In many respects, the book is a love letter to John Maynard Keynes, whose ideas form the bedrock of both Varoufakis’ analysis of the euro crisis and his proposals for its resolution. For this reason, the problems with Varoufakis’ vision of the world economy are essentially the same as Keynes’.

Ultimately, Keynesian economic models view the economy in a similar way to Newton’s ‘clockwork universe’, in which everything moves in an unchanging and predictable fashion, reducible to simple mechanics. In this clockwork universe, a simple “mechanism” is perfectly capable of fine tuning capitalism to the point where its contradictions are effectively resolved. It makes perfect sense. However, the realities of capitalism are quite different.

When the system fails, as it did during the collapse of the Bretton Woods system of fixed exchange rates in the 1970s, the formalistic nature of Varoufakis’ (and Keynes’) argument makes it necessary to either throw out the model altogether or insert some external pollutant as the alleged cause of the problem. Varoufakis opts for the latter option, with hubris playing the role of the villain. Indeed, the expression, “collapsed under the weight of its own hubris” is used several times throughout the book as a sort of deus ex machina with which to explain away the inevitable crises which make his model unworkable.

It was apparently the hubris of European upstarts like Britain and France, who began to strain against “Washington’s stewardship of global finance”, which led the Nixon government to jettison the entire Bretton Woods system and left the Europeans to wander the desert – the euro’s tale of original sin.

Likewise, it was the hubris of the German Bundesbank and countless European officials which sealed the euro’s disastrous fate, despite being warned all along by none other than Yanis Varoufakis, who suffers the same fate as the Iliad’s Cassandra, the Trojan Princess who was given the power to see the future but was cursed to never be believed.

Limits of the nation state

What is absent from Varoufakis’ analysis is an appreciation of the fact that under capitalism, vested national interests will always come to the fore, and that ultimately no political institution can be fully independent of these interests. Generally, it is the interests of the stronger state (the USA in 1944, Germany in 2015) which predominate, and the inability of institutions like the European Central Bank to act in “enlightened self-interest” has little to do with the hubris of its officials, and everything to do with the reality of capitalist relations and the straightjacket of the nation state.

Another vital aspect of the crisis which Varoufakis hints at but never examines seriously is the question of class. Varoufakis explains with admirable clarity how the so-called “bailout” of Greece was nothing more than a smokescreen for plugging the holes on the balance sheets of French and German banks with yet more taxpayers’ money, but the point is not developed. In a system where the interests of a certain class of a certain nation (or group of nations) are diametrically opposed to the interests of another, then these will inevitably come into conflict with only one winner. This is precisely what occurred in Greece under Varoufakis’ leadership.

Varoufakis heaps scorn on European officialdom, which “lacks the political courage to do either and is bereft of the analytic capacity to take a stand on anything controversial”. This may be true, but it gives no explanation as to how such a collection of cowardly ignoramuses were able to crush the most left-wing European government in the history of the EU. The answer to this riddle surely lies in Varoufakis’ and his colleagues vain attempt to convince the European ruling class of its own enlightened self-interest.

First as tragedy, second as farce...

Having established that the euro was a doomed enterprise from the beginning, which is now subjecting nations like Greece and Ireland to never-ending “fiscal waterboarding”, Varoufakis sets out his grave predictions for where this will lead.

Referring to the rise of the Front National in France, Victor Orban’s ultra-nationalist government in Hungary and the success of the Golden Dawn in Greece (a Nazi party in a very real sense), Varoufakis warns that unless the euro is saved from itself, Europe will disintegrate, bringing about a return to the horrors of Fascism and the War which engulfed Europe and the world in the 1930.

To prevent this from happening, Varoufakis states that firstly the euro crisis and its endless cycle of austerity must be stopped; and secondly, that Europe must be democratised in order to survive. As for how these can be achieved, Varoufakis appends a “Modest Proposal”, drafted in 2013, which effectively sets out a European New Deal, in which the ECB prints money to funds infrastructure and make up for the lack of private investment in the European economy.

Aside from the fact that this Proposal is already somewhat out of date in the light of the ECB’s trillion euro programme of Quantitave Easing, it also effectively argues that a depression comparable to the 1930 can only be avoided by implementing the same policies which failed to end the Great Depression in the first place.

Elsewhere, the USA, Japan, and China have all attempted similar QE programmes in recent times, all to no avail. Yet Varoufakis is intent on Europe repeating a failed experiment again and again, at the expense of the working class.

As for Europe’s democratisation, a “large democratic stimulus” is needed. What this means in practice is left to the reader to decide. Whether such a stimulus would rest on a movement of European workers and what form this should take is likewise not mentioned, leaving nothing more than an abstract call to build democracy with… democracy!

Ultimately this book is more about Yanis Varoufakis than anything else: Embarking on this book as a wide-eyed student of Keynes, our protagonist is thrown aside by arrogant conquerors, only to return as a prophet of doom, foretelling an apocalyptic future for those who do not follow him. The foundation text for a new mass movement? Perhaps not. But as a Greek tragedy for our time it fits the bill quite well.