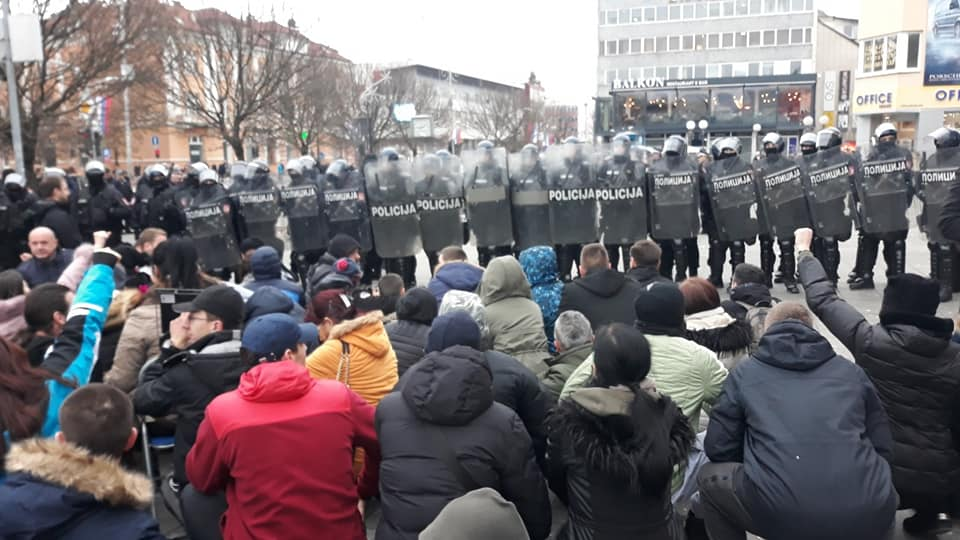 Yesterday, on December 25th, members of Republic of Srpska (Serb part of Bosnia and Herzegovina) riot police cracked down on a peaceful protest of the group called “Pravda za Davida” (Justice for David), in the centre of the statelets de facto capital, Banja Luka.

For more than 270 days, people have been fighting vigorously alongside the parents of the murdered young man David Dragičević, in order to find out the truth and expose the series of cover ups surrounding his murder. Their struggle has shaken the public, as well as the ruling class. Today's events are proof that their demands can no longer be ignored.

The protest against the appointment of Dragan Lukač as Police Minister, has led to the arrest of David's parents and members of the "Pravda za Davida" Facebook group.

Throughout the case Lukač has made a series of contradictory claims about David's murder and it is clear that he has an interest in this case being covered up. He has a bleak record. During his tenure there has been a string of unsolved murders, the involvement of Special Forces in bank robberies, the involvement of inspectors in criminal activities, and so on. 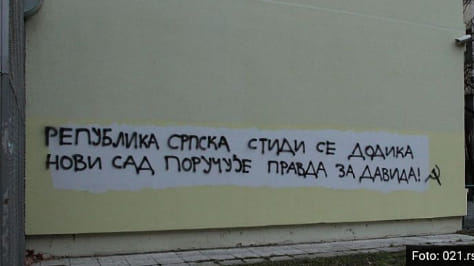 Graffiti in Novi Sad, Serbia (where many Serbs who are originally from Bosnia live today): “Republic of Srpska is ashamed of Dodik (Serb president in the Bosnian Presidency and leader of the Serb ruling class in Bosnia)” Novi Sad says: Justice for David!”

David’s father, Davor Dragičević, with mass support behind him, has been fighting for months in the hope of finding out the truth about the perpetrators of this gruesome crime. He has said, and is proving, that he is ready to fight to the very end to get to the bottom of his son’s murder, and he has been exposing evidence of the regime's criminal activities.

Because his accusations and his anger is entirely justified, it has frightened the political elite and forced it to react violently to preserve its position. Starting with charges against members of the Facebook group ‘Pravda za Davida’, the regime ordered the riot police  to “clear” people from the main square, where regular protests have been taking place. But people reacted strongly against that, and stood firm in defence of David's parents' fight. The police have shown all of their brutality, pushing people from the square, frightening them with firecrackers, and charging at them with batons and shields, injuring several people including children and elderly.

Commemorative symbols such as hearts, candles and David's photographs have been monstrously stampeded.
Why is this happening? Because the role of the police is to protect the interests of the ruling class, the class that owns the key levers of economy and through that, it also controls the key levers of politics and the state apparatus.

On the other hand, a working man feels more and more pressure, misery and humiliation. He can see, in what happened to David, that not even his children's lives are secure. He realises he has to fight to survive. These two contradictory forces must inevitably come into conflict with each other.

The real role of the police is not to “fight crime”. Their role is only to fight those forms of crime that haven't been adopted by the ruling class, those forms of crime which are not in the state's hands. Meanwhile the criminal activities which are financed by the politicians and tycoons, who enjoy protection from “law enforcement”, ready to beat up any common worker who dares confront them, are untouched by the police.

This is becoming more and more clear to those taking part in the “Justice for David” protests. The role of the police has become naked in its thuggery and its blind loyalty to the Dodik regime.

Furthermore, the nationalism, often used by all ethno-nationalist politicians in Bosnia and Herzegovina, is facing bankruptcy as well, as a similar movement has been developing in the Bosniak-majority part of Bosnia, the Federation. There, another unsolved murder of a young man named Dženan Memić, lead to the creation of  “Pravda za Dženana” (Justice for Dženan), the Bosniak counterpart of the Banja Luka protest movement. The two movements have, on multiple occasions, expressed mutual support and solidarity, despite the fact that the fathers of the two murdered young men used to fight on opposite sides in the Bosnian civil war. In fact while they supported each other, the national ruling classes did the same by waging campaigns against them them, accusing them of treason and working for “the other side”. Very soon it became painfully clear that ordinary working people on both sides of the ethno-religious divide have the exact same problems and exact same interests - and that they’re all threatened first and foremost by “their” own ruling elites. These practical lessons have bulldozed away decades of propaganda, confusion and nationalistic paranoia among many people, especially the youth. The need to show solidarity and support has also spread to Serbia, where rallies titled “Justice for David and Dženan” are being organised.

However, as the state oppression toughens and the support initially given to the movements by opposition parties wanes, it is becoming clear that the movement is facing an ever more pressing dilemma - where to go from now, how to articulate demands and how to accomplish their goals?

The initial cries of liberals for the rule of law, as well as the delusions of some anti-regime nationalists that the masses and the police having the same national interest, become irrelevant when experience shows that it is neither law nor nationality that governs society under capitalism - it is the economic interests of the ruling class. The beating of these protestors is yet another example of what the ruling class is capable of when it feels that its position and bank accounts are threatened.

Besides, it would be naive to think that the problem lies only with this regime and that it would be solved by a mere change of the parties in power. The representatives of the current “opposition” in practice have the same policy and defend the same economic interests – those of the privileged minority.

Looking for an alternative does not mean choosing between two coalition blocks, it means fighting against the system that created and maintains them. Workers must not trust the tycoon parties. We need our own workers' party with a programme of radical social transformation. We need a party that will fight to put the commanding heights of the economy in the hands of the workers, because without control over the economy the workers are reduced to choosing the colour of the baton that beats us. These are the ideas that the comrades of the IMT in Bosnia stand for. We must discard the nationalism that kept Bosnian and Yugoslav workers divided. We need to learn from the experiences that life under capitalism has thrown in our faces. The only way to solve the burning problems of the working class is to unite on a class basis.

We must organize into our own workers' party!
Let us put an end to the rule of all the murderers, thieves and exploiters!
The fight for justice is the fight against capitalism!