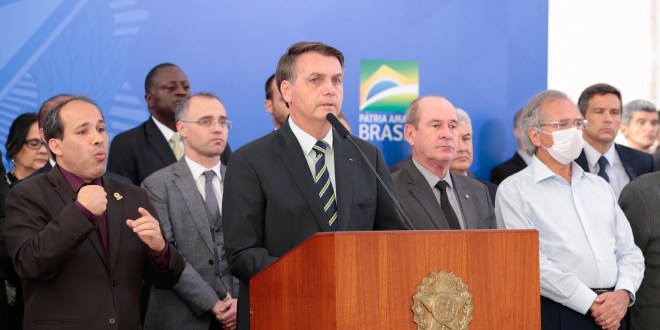 The political crisis is accelerating. Bolsonaro is isolating himself more and more as his government teeters. The press is adding pressure and calling for investigations. Ex-president Fernando Henrique Cardoso is calling for Bolsonaro’s resignation. Right-wing politicians, who were elected in the wake of Bolsonaro (Doria, Witzel etc.), jumped ship a long time ago, like all good opportunists. Mandetta is gone. Moro is gone. And the question that many ask is: how long can right-hand-man Paulo Guedes last?

When Bolsonaro invited Moro to be his “super administrator” of Justice and Public Security, he made a risky move. Moro's presence reinforced the government's credibility, but the “Car Wash” judge was already more popular than Bolsonaro, having been converted by the bourgeoisie and its media into a hero fighting corruption - a ruthless arbiter standing against politicians and the powerful. In a way, Bolsonaro has become hostage to his minister. And that is evident now, with Moro's resignation and his accusations.

If Bolsonaro has already piled up a series of crises since he took office, the beginning of the pandemic has worsened everything. With disastrous opinions, statements and positions, government approval dropped even further, and “Fora Bolsonaro” became a routine cry during the pot-banging protests that have taken over several cities in the country, including during the president’s speech on 24 April.

After denying the seriousness of the pandemic and opposing the isolation measures, Bolsonaro has tried to duck responsibility for the economic consequences of the crisis (by placing it on opposition governors and mayors). He also aims to increase his support among sectors of the economy that are losing money, facing closed stores, reduced sales, etc. However, what he has achieved with his speech is to maintain his retinue of fanatics and show himself to the majority of the population as an irresponsible ignoramus, who says one thing today and then its opposite tomorrow, or, sometimes, in the same day. Increasingly, the bourgeoisie fears the consequences of keeping such a helpless leader at the head of the state, who is throwing petrol on the flames, with a colossal crisis already smouldering. They know the results could be explosive.

Bolsonaro's support for and participation in a demonstration on 19 April, in which the few participants raised banners calling for the end of the isolation measures, praising the old dictatorship and supporting military intervention, triggered a Supreme Court investigation into the organisation financing the demonstrations, which might implicate the president and his allies. This case will be added to an investigation of fake news, also underway at the Supreme Court. Impeachment requests are mounting in the congress. Bolsonaro is trapped, fears his fall and is now trying to approach the so-called “centre” in the National Congress to block the route to an impeachment.

To shield himself from the investigations, and in an attempt to gain support from the “centre” and its politicians who have been accused of corruption, Bolsonaro needed to get a Director General of the Federal Police and a Minister of Justice under his control. But Moro is a bigger star, with his own plans. Moro left the government, accusing Bolsonaro of politically interfering in the Federal Police (PF) for his own interests, further aggravating the crisis and creating cracks in Bolsonaro’s base of support.

Between Sérgio Moro and Bolsonaro, neither is better. May this conflict serve to unmask and demoralise both of them. Moro has direct links to the US Department of Justice; and, despite denying it, electoral plans for 2022 are certainly on the horizon.

Moro's departure and his public break with Bolsonaro are leading to a political rearrangement within the ruling class / Image: Marcos Corrêa, PR

Now Moro criticizes Bolsonaro, but he would have to start by explaining why he spent 16 months in silence in this government, while the president paraded his relations with the far-right militia of Rio de Janeiro for all to see. In fact, the accusation that Bolsonaro wanted to interfere politically in the PF is hypocritical. First, because there is no impartiality, be it in the Prosecutor's Office, in the PF, in the STF or any other branch of the bourgeois state. Second, because Moro was in charge of a clear political operation, the Car Wash, which exploited the PF and the judiciary, with a series of abusive and illegal measures to achieve its political objectives, which was partly revealed by The Intercept Brasil website.

To say that the government is already over would be premature, even if it is rapidly heading in that direction. However, Moro's departure from the government and his public break with Bolsonaro are rapidly leading to a political rearrangement within the ruling class. Previously, the sectors that controlled the major press organs in the country criticised but preferred to support the government because they saw it as a viable instrument to apply Paulo Guedes' counter-reforms and economic measures. But now Bolsonaro has lost the means to govern. Globo, leaning on Moro, is agitating for the end of the Bolsonaro government. Editorials from the main Brazilian newspapers defend impeachment. FHC, careful until this week to address the issue, now openly says that he expects Bolsonaro to resign to save the country from a long process of impeachment. On Friday, Ciro Gomes made an impeachment request. Even PSL, a former Bolsonaro party, is filing an impeachment request

Moro's press conference on Friday morning and the “evidence” he gave to Jornal Nacional, exclusively to be broadcast at night, show a rehearsed move between Moro and Globo. Why didn't Moro show the "evidence" at the press conference in the morning? He acted in the same way as during the Car Wash leaks: building a media spectacle. This has a clear political objective. And Globo seeks to organise the large sectors of the bourgeoisie to end Bolsonaro's term more quickly. If before, they did not undertake this task, it was because they lacked anyone to replace him with. Now they have their man.

On the other hand, the left - Lula, the PT, PCdoB and also the PSOL - who have been late in taking up the “Fora Bolsonaro” slogan, do so now in the sense of proposing a way to preserve bourgeois institutions, with a government of national unity. This is the meaning of the communiques between Doria and Lula; the shared virtual platform between Lula and FHC on 1 May, and the praise given by Flávio Dino (PCdoB) to General Mourão etc.

Meanwhile, the pandemic causes hundreds of deaths per day in Brazil (perhaps thousands already, hidden by a gigantic underreporting of the real cause of deaths) and the health system is starting to collapse in several parts of the country, as a result of the scrapping of healthcare caused by the different governments at the service of the bourgeoisie, including those led by the parties of Lula and FHC.

The crisis is of the capitalist regime and the Bolsonaro government is the most rotten expression of the degeneration of the bourgeoisie. The Marxist Left, which launched the slogan “Fora Bolsonaro”, is organising “Fora Bolsonaro” action committees in different locations, fighting for the overthrow of this government, but not for an organised exit by the political sectors that command the country. Bolsonaro's resignation would give Mourão the presidency. The impeachment would precipitate new elections, where Moro could be launched with the united support of the bourgeoisie. We support the building of a movement to overthrow the government and pave the way for a true workers' government, without bosses or generals. Only the working class in power can reorganise society, plan the economy and apply the emergency measures necessary to face the tragic consequences of this worldwide pandemic. Socialism or barbarism!