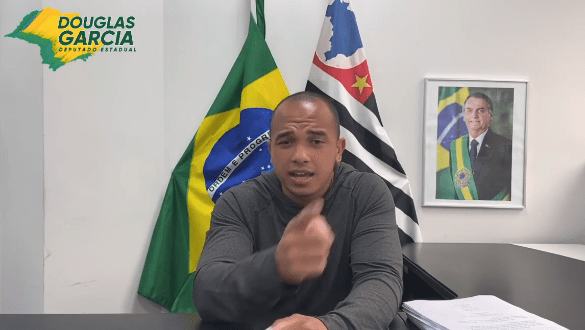 Note: this article was originally published in Portuguese on 4 June, concerning a list of anti-Bolsonaro activists whose personal details were released, putting them at personal risk of attack by far-right and fascist elements, in a clearly illegal act of intimidation.

The deputy of the state, SP Douglas Garcia (PSL), a major ally of Bolsonaro and his children, posted on his Twitter calling for the denunciation of antifascists. In one of the messages posted on 1 June, he wrote:

“If you encounter the full name of any self-proclaimed ‘anti-fascist’ and can provide proof that they are what they claim to be, I ask that you send an email with their name and the proof attached to my email: douglasgarcia@al.sp.gov.br.”

And he followed up with a threat:

“If you think you can make me step back and shut up in the face of all this, gentlemen, the effect will be just the opposite. Conservative death squads must be criminalized and legally extinct! I will not tire until every ANTIFA (aka fascist) is in jail!”

Today, on the 4 June, he continued asking for names:

“We are still receiving reports of profiles belonging to the terrorist group ‘Antifa’. You can send them to me by email or the inbox of any of my social network accounts: Twitter, Facebook or Instagram. I am maintaining an up to date list which I will deliver to the appropriate authorities for investigation.”

Douglas Garcia, elected in 2018, is vice president of the Right Movement of São Paulo. He was investigated during an inquiry of the Public Prosecutor of São Paulo who is responsible for investigating the use of the Legislative Assembly of São Paulo to attack political opponents and spread fake news. Today, a 999 page file containing the full names and personal data of more than 1,000 people who are supposedly anti-fascist activists, and the addresses of anti-fascist meeting locations, were circulated via social networks and WhatsApp groups. This is certainly a crime. The personal data was collected without authorization and it puts the physical integrity and lives of those listed at risk by making them potential targets for fascist groups.

Added to this is the Bill presented by deputy Daniel Silveira (PSL-SP), who seeks to classify “anti-fascist” groups as terrorists who are subject to the Anti-Terrorism Law. All of this is clearly an attempt to intimidate activists and left organizations during a time of an increasing number of demonstrations against the Bolsonaro government, which demands an end to racism and police violence. If the popular demonstrations in Brazil are driven by the popular movements in the United States, the actions of Bolsonaro supporters against anti-fascists are driven by their master, Donald Trump, who also wants anti-fascists classified as terrorists and held responsible for the protests in the USA.

The political maneuvers of Bolsonaro supporters reveal the desperation of a group that is being discarded by the bourgeoisie, cornered by investigations, and attempting to maintain a base of support by radicalizing its speech and actions.

This sordid illegal data collection, promoted by Douglas Garcia and Daniel Silveira’s PL, must be widely condemned by the workers and the popular movement. We are calling on all organizations, left parties, militants, activists from the popular movement, workers and unions to take action in a united front to stop these threats in their tracks, so they do not result in concrete actions against those involved in the struggle against the Bolsonaro government, and for the demands of the oppressed and exploited sectors of society.

An injury to one is an injury to all, and only our own forces can truly guarantee our defense. To be clear: if any militant in any organization, collective, or movement is threatened or attacked by a group of fascists, all workers’ organizations and social movements must unite for the fightback.

We encourage participation in the different actions being called around the country for next Sunday (7 June) against the Bolsonaro government, using the necessary pandemic-related protective measures. It is the class struggle and the movement of the masses that will open a way out of the current crisis, and will be how we respond to any attempts to intimidate and criminalize those who fight for a future in Brazil, the USA, and the whole world.