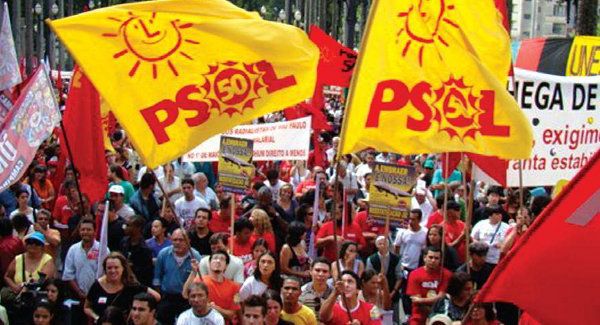 The following is an open letter to members of PSOL by Marxist Left (the IMT in Brazil), responding to the announcement of a new resolution adopted by PSOL’s National Directory that lays the ground for alliances with bourgeois parties.

The PSOL National Directory met on 26 and 27 October amidst an international wave of insurrection, and in the midst of a profound economic and political crisis in Brazil, at all levels. Political polarisation is advancing at the same time as the crisis facing the Bolsonaro government deepens, and loses its support base, to the point that it today represents a very small layer of society.

The policy and tactics that the leadership of PSOL is conducting, which were reaffirmed at this meeting, endanger the party.

“As for potential electoral allies, PSOL will work to build its alliances with parties that clearly present a left-wing opposition to the Bolsonaro government, confronting the agenda of economic liberalisation, and defending democratic and social rights, and from now on any alliances with the parties that support the federal government, as well as those that make up the so-called ‘centre’, are vetoed. Thus, dialogues with the opposition parties are allowed, and the final approval of the alliance arc will be carried out by the VII National Congress of PSOL.”

This political line is exactly the same as that which liquidated the PT as a true workers' party. It is clearly a guideline to seek alliances with the PT and the PCdoB, and also with the PDT and the PSB (which are bourgeois parties, treated as if they were leftist). The political heart of the resolution is the question of "alliances against Bolsonaro", entirely erasing the class and socialist character that PSOL's opposition to Bolsonaro and its accomplices must have, as well as erasing the programmatic opposition to PT, PCdoB, PDT, PSB, etc.

Beyond this orientation, the majority of the leadership still fought to defeat the "Fora Bolsonaro" (Bolsonaro Out) slogan, thus refusing an open struggle to put an end to this reactionary government now and pave the way in the struggle for socialism.

Such a position of electoral adaptation and respect for a presidential mandate that is the result of political and judicial fraud implies that the Brazilian people must support Bolsonaro until the end of his mandate in 2022.

However, this position was openly contradicted two days later by the PSOL’s top leader, who spoke in the House of Representatives and ended up shouting “Fora Bolsonaro!” And in the rally on 11 May, in São Paulo, the party's former presidential candidate was surrounded by protesters shouting "Fora Bolsonaro" and he was, clearly grudgingly, forced to join in.

That the PT has such a political line was to be expected, but the PSOL should join in the struggle carried out by increasingly widening layers of its own membership, youth and workers to put an end to the Bolsonaro government as soon as possible.

The PSOL's Lauro Campos and Marielle Franco Foundation at the beginning of the year launched, jointly with the foundations of the PT, PCdoB, PDT, PSB, PROS and PPL, the “Democracy Observatory” group. Party leaders even attended a meeting to set up a movement (“Rights Now! Forum for Democracy ”) together with the PT, PCdoB and bourgeois parties like PSB, PDT, PV, Rede, Cidadania and even the PSDB (Temer's Party)! The justification given would be the unity with everyone who opposes Bolsonaro, including sections of the bourgeoisie.

The point is that the ruling class may be divided over tactics, broad sections of it are even against Bolsonaro, but it is united in attacking the working class. The bourgeoisie and its different parties are not allies of the socialists, they are our enemies.

This is why PSOL has not been able to connect with the millions of students who took to the streets on 15 May and other demonstrations and has not been seen as a political point reference by students struggling against cuts in public education and science.

In Rio de Janeiro, [PSOL State Representative] Marcelo Freixo discusses alliances with PT, PCdoB, PSB, PDT and Pros. In Porto Alegre, there is the possibility of PSOL participating in a slate headed by Manuela D'Ávila of the PCdoB, the party that voted for Rodrigo Maia [from the right-wing DEM, which is part of Bolsonaro's cabinet] for the presidency of the Chamber of Deputies. Similar agreements are projected for Belém, Florianópolis and other cities. The president of PSOL, Juliano Medeiros, justifies this policy of adaptation: “We emerged as opposition to the Lula administration, but that was 15 years ago. Now we are all opposed to Bolsonaro."

We fight for unity of the working class. PSOL must certainly be on the side of the other workers' organisations and parties in the practical struggle against the attacks and for the demands of workers and youth. But this has nothing to do with participating in political fronts with bourgeois parties to defend bourgeois democracy, and it has nothing to do with electoral alliances with those who have already ruled and betrayed the workers. The banner of socialism cannot be lowered and raised only on holidays.

PSOL has the potential to grow, to be a centre for the reorganisation of the left, the youth, the working class. However, it is moving in the direction where the PT ended, in adapting to electoralism and parliamentarism, and making alliances with the bourgeoisie.

The PSOL should present a revolutionary, socialist programme of overcoming the decaying capitalist system, a programme diametrically opposed to the line of the bourgeois parties and the PT and PCdoB, which are at the service of the bourgeoisie and their social order.

PSOL must refuse the electoral alliance with all these parties of order and must launch its own candidates in the 2020 elections, with a political platform that should include: non-payment of domestic and foreign debt, free public healthcare and education for all, general wage increases, the repeal of the pension reforms of FHC, Lula, Dilma and Bolsonaro, repeal of the labor reform, etc., renationalisation of all privatised enterprises, nationalisation of banks and multinationals, and for a socialist workers' government: “Fora Bolsonaro!”

Capitalism is in crisis, the world is in turmoil. If PSOL intends to play a role in brushing this system aside, it must urgently change its course.

It is time for PSOL members to take the party in their own hands and set a revolutionary policy according to the situation we live in and the needs of the working class. The launching of our own candidates with a socialist programme and the struggle in the streets for "Bolsonaro Out" is the main task facing the upcoming PSOL Congress in 2020. This is what will prepare the next victories of our class.

Executive Committee of the Marxist Left