Details
In Defence of Marxism
01 February 2007

Brazil
Share
Tweet
The workers at the CIPLA plant in Brazil have successfully run the factory under workers’ control since they occupied it. The government had tried to crush them by attempting to seize assets through the courts. The state is now once more on the offensive. The leaders risk imprisonment and the factory could be closed. But the workers are fighting back. They need your help.

This week, the workers of the Brazilian Occupied Factories have launched yet another national and international campaign in defence of jobs. The reason is the decision of the Federal Judge Oziel Francisco de Souza, from the Fiscal Execution Court in Joinville, to seize 11% of CIPLA's revenues in order to pay off part of a debt of 200 million reales of the former shareholders of the company Luiz and Anselmo Batschauer built up with the Social Security Institute (INSS). 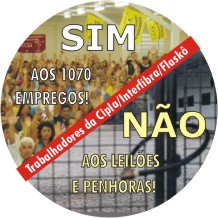 The Federal body has already brought three court cases against the company, one in 2002, another in 1998 and another one in 1996 to the value of Rs 4.5 million. According to the lawyer Chico Lessa, in charge of legal affairs of the occupied factories, the implementation of this seizing of revenue, would give the green light to the implementation of another six other court orders, which would mean the seizing of 41% of the total revenue. "Anything over 1% is not acceptable and would mean the closure of the factory. We do not want trouble with the law nor with the Social Security Institute. All we want is to defend 1000 jobs and the livelihood of these families. Furthermore, in reality we did not contract these debts", he said.

The proposal of the workers is to go back to the agreement reached with the INSS in 2005, by which they agreed to pay 1% of the revenue of the companies in exchange for not executing the pending orders to seize capital goods, buildings and revenue. There is another agreement, reached at the same time and along similar lines, with the Tax Revenue. Two months after reaching this agreement, this was unilaterally broken by the INSS.

Braulino Antonio Joaquim, a Cipla machine operator for 23 years, angrily said: "nobody in the factory will accept a judge coming and implementing a seizure which would close down the factory. We will struggle until the end".

For the coordinator of the Movement of Occupied Factories, Serge Goulart, "what the judge should do is to get payment for this debt from those who built it up, and not from the workers who for four years have made a super-human effort to keep the factory working. If the judge maintains his intention of seizing 11% of the revenue of the company, in effect he would be decreeing the closure of the factory, something which cannot be accepted."

October 2002 - After a strike in demand of unpaid back wages, the workers of Cipla and Interfibra take control of the factories in November 2002. Taking into account the debts of more than Rs 500 million with the government, left by the former shareholders, the workers raise the banner of nationalisation of the factories as the only way to save the jobs, rights and conditions of the 1000 workers.

June 2003 - In a meeting with the workers and politicians, Brazilian president Lula guaranteed the maintenance of all jobs and rights. Meanwhile, the government allows for the payment of debts through the seizure of machinery and revenue.

2005 - After a meeting with Minister Luiz Dulci, a commission was set up with experts from the government bodies BNDES, BRDE and BADESC, to study the viability of the companies. The report, sent in February, concludes that, "the companies are viable" and recommends that "their credits be transformed into shares, which would be used as capitalisation for the BNDES and for one of the regional development bodies, BRDE or BADESC".

In mid-2005, in order to start paying the debts with the INSS and Tax Office, apart from seizures that would put in jeopardy the functioning of the factories, arrest warrants for the leaders of the workers were also issued. Through a national and international campaign in defence of the factories, the workers managed to organise meetings with the directors of the INSS, at that time Marcelo Freitas, in Brasilia, and Marcelo Evaristo, in Florianapolis. At that time, it was agreed to pay 1% of the revenue of the factories in exchange for the suspension of all other actions, but the directors did not honour their word and continued to charge and threaten with imprisonment.

In the last four years, the workers of the Occupied Factories won the solidarity and respect of political, trade union and peoples' representatives, nationally and internationally, on account of their struggle and resistance. They are now asking once again of their supporters, a united front struggle with their cause, because the struggle in defence of jobs is the same struggle all over the world.

Send messages of protest to: