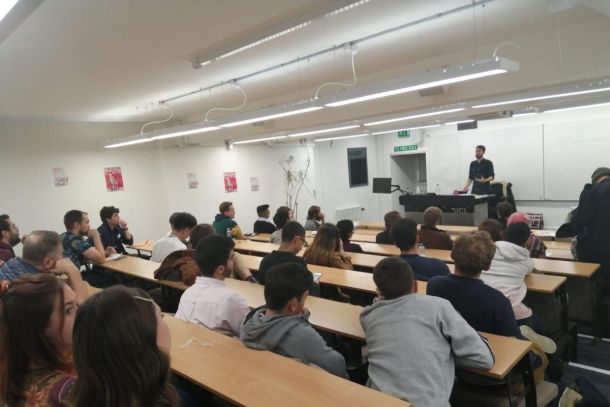 Since mid-September, the Marxist Student Federation in Britain has signed up 3,193 people across the country. This is by a huge margin our best year ever. It reflects the deepening crisis of capitalism, and subsequent search for new ideas from the youth. We’ve been present in 36 universities, at the freshers fairs, putting forward the demand for a radical socialist labour government. With a General Election around the corner, people are ready to talk about politics, and the Marxist societies are bigger than ever.

The freshers fair period started in the middle of the huge international climate strike action. All around the world, including the UK, hundreds of thousands of school students were on strike to protest climate change. We were present in these, putting forward the need for revolutionary change to defeat the threat of climate action. Lots of Marxist societies are putting on public meetings this term with a Marxist analysis of this climate catastrophe, explaining why we need a socialist planned economy to take control of the situation.

We’ve also seen an increase in our attendance. We’ve had 800 people at our first society meetings, most of which on the subject ‘What is Marxism?’. As society polarises, we’ve seen more propaganda from the ruling class against Marxist ideas. Last year the White House produced a paper against the ‘costs of socialism’ which recognises the rising popularity of socialism in the United States (particularly amongst the young) and attempts to provide a scientific rebuttal in favour of capitalism. A couple of months ago the BBC produced a slanderous video on Marxism again trying to discredit the ideas and its explanation of current events. Despite these attempts, our meetings showed a clear understanding of the problems of capitalism and resolute determination by its attendants on the need for a socialist society. 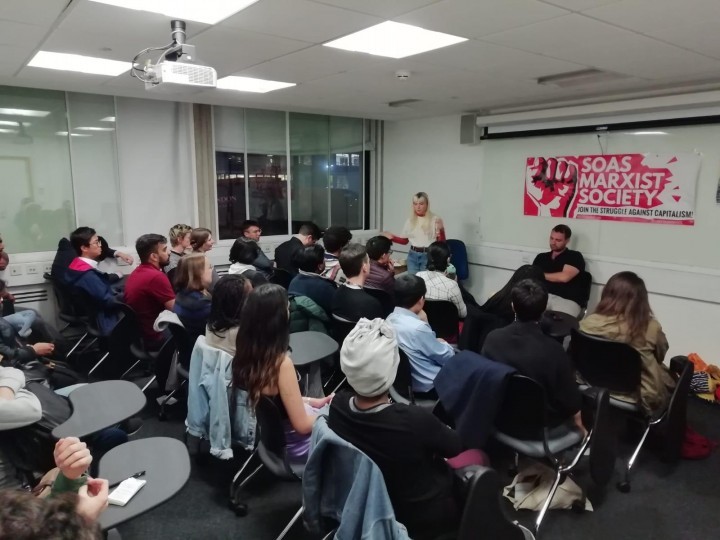 The Marxist Students in Britain have signed up 3,193 people across the country

We also met shortly after the Labour Party Conference at the end of September (where we had delegates from various Marxist societies such as UCL and Sheffield) which came out with radical policies for the manifesto (such as abolishing private schools). It’s clear that the labour party is united around the fight for a Corbyn led government. We think that Marxist students up and down the country have a role to play in this election.

We’re organising students to join the fight for a socialist labour government. This has gone off to a flying start in places like Sheffield. Sheffield Labour Students and Sheffield Marxist society have joined up under the banner of Students4Corbyn to get students registered to vote and canvassing in student halls. They’ve already signed up 60+ people. This needs to be replicated throughout the country!

In Brunel, members of the Marxist Society & Labour society met with the prospective parliamentary candidate for Uxbridge Ali Milani to discuss plans for canvassing in the uni. Brunel Marxist and Labour students will be having monthly meetings from now until the election, canvassing and holding events on campus and campaigning to get Labour elected on a bold socialist program.

As well as preparing for the election, Marxist Societies are making plans to go to the Revolution Festival in London, on 25th -27th October. This is set to be a great weekend with 300 Marxists, discussing Marxist history, theory, current events and more.

In addition to this, it is likely that the CWU (postal workers union) will be going on strike soon and we must orientate our forces towards this industrial dispute, which will be militant. Swansea Marxist society is hosting a joint meeting with Swansea Labour Students on the need for solidarity with this strike. The MSF is ready to be at these picket lines supporting the workers. The UCU (lecturers union) strikes could follow.

It’s clear that a period of polarisation and intensifying class struggle is opening up. The MSF is bound to have its busiest year ever, training up this new layer of radical students. However, our first task must be to bring down this Tory government, and elect Corbyn to power on a socialist programme.