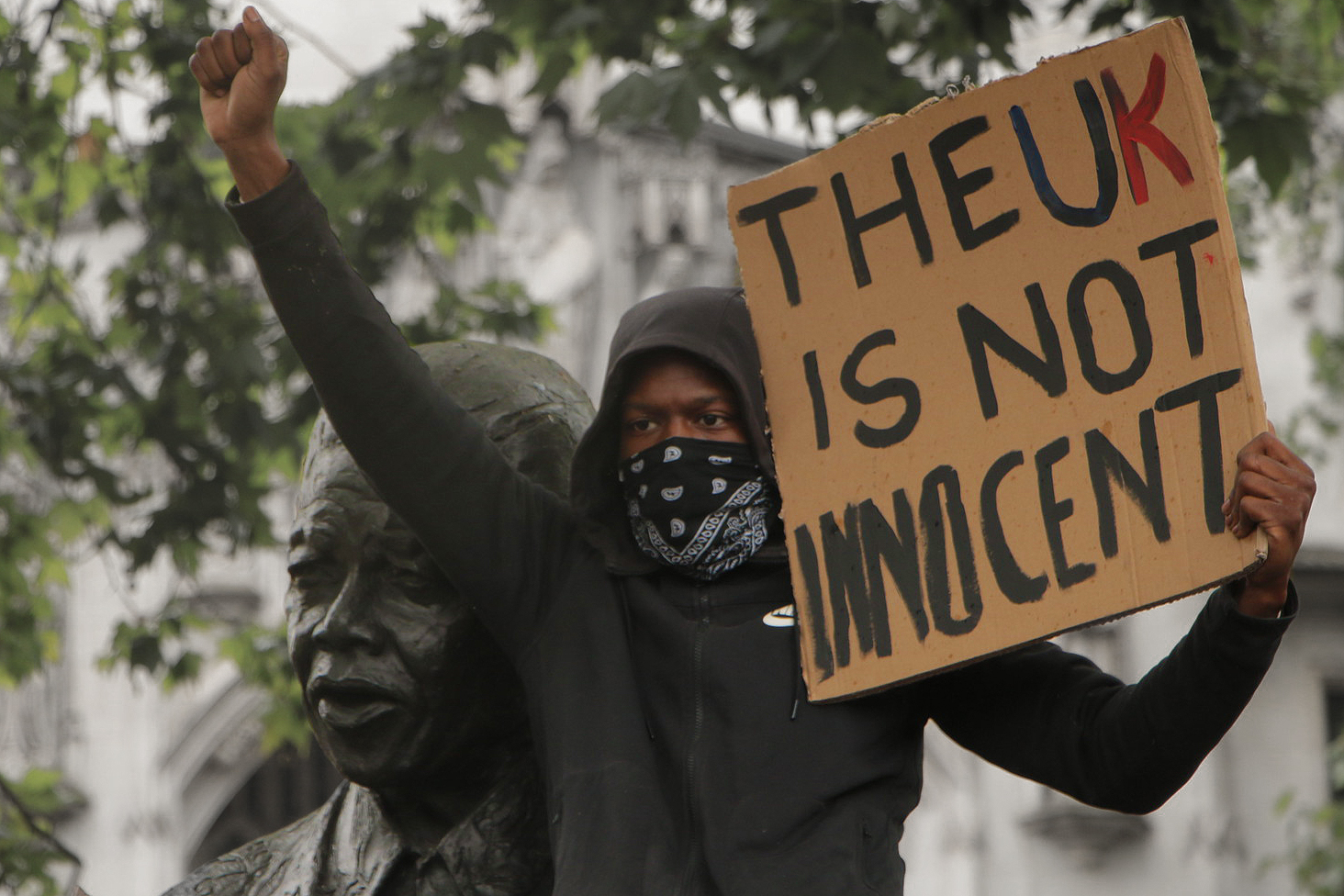 The government’s report into racism in Britain is a slap in the face to the BLM movement. The Tories are cynically attempting to play white and black workers off against one another. We need united class struggle to topple their racist system.

Last week, the Tory government released its long-awaited report into racial inequalities in the UK. Scandalously, this report not only says that Britain does not suffer from institutional racism, but that the UK is actually a model for the rest of the world in terms of race relations.

The conclusions of the report, however, are not surprising. The report was written by the Commission on Race and Ethnic Disparities, which was chaired by Dr Tony Sewell, CBE.

Sewell is a black careerist, who is on record as saying that there is no institutional racism in Britain. In a scandalous article in Prospect magazine in 2010, under the headline ‘Master class in victimhood’, he said: “Black boys used to fail at school because of racism, now they fail because they don’t pay attention.”

His position then was that “much of the supposed evidence of institutional racism is flimsy”. He also went on to blame the underachievement of black youth in education on...the fact that they are told that British society is racist!

The Sewell report reeks of arrogance, contempt, and defiance, reflecting the attitudes of the British ruling class.

The reason for this is very clear: the British establishment consciously promotes the very real racism that exists in the UK today, whipping up xenophobia and nationalism at every opportunity, in order to pit workers of different ethnic backgrounds against each other. Their method is clear: divide and rule.

The Sewell report notes the higher COVID death rate amongst BAME people, as well as the Grenfell tragedy and the Windrush scandal. And yet it still concludes that there is no institutional racism in the UK.

Remarkably, the commissioners even say that racism has decreased, absurdly highlighting the opening of the 2012 London Olympic games as an event that displayed the mosaic of British life!

So farcical and insulting are the report and its conclusions, that even some of Boris Johnson’s own team have distanced themselves from it, with Downing Street’s race advisor Samuel Kasumu resigning in the wake of the report’s publication.

In handlings with the police; in medicine and mortality rates for black women; in education exclusion rates; in unemployment levels; and in income and savings: in all these cases we can see the disproportionate ways in which black people and other ethnic minorities are impoverished and oppressed within capitalist society. 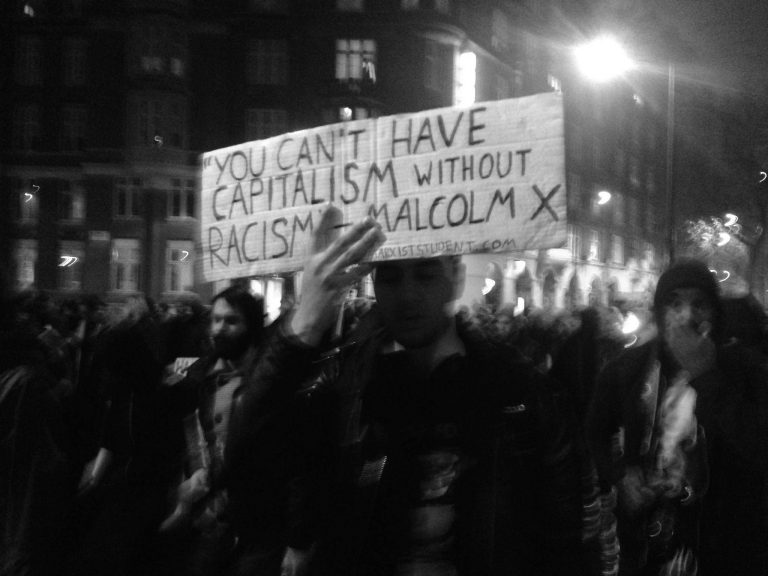 Racism is not just an unfortunate hangover of Britain's colonial past. It is part and parcel of capitalism in Britain today / Image: Socialist Appeal

Racial discrimination is woven into the fabric of capitalism and imperialism. Racism is irredeemably institutional. And the UK is no exception to this fact.

This rotten status quo isn’t just an unfortunate hangover from the racism of Britain’s colonial past. Indeed, racism in the UK today is deeply rooted in the country’s colonial and imperialist past.

Furthermore, this racism continues to be actively and consciously promoted by the ruling class, because it serves a purpose: furthering their class interests and aims. Capitalism today – in Britain and internationally – relies on racism to divide workers against each other, in order to exploit workers of every ethnicity all the more effectively.

As black revolutionary Malcolm X correctly stated: you cannot have capitalism without racism.

This is more obvious today than ever, with the Tories whipping up ‘culture wars’ over racist statues, as a distraction from the accelerating slide into poverty for millions of people.

The report is a brazen continuation of this policy. It openly attempts to pit the ‘white working class’ against ethnic minorities. 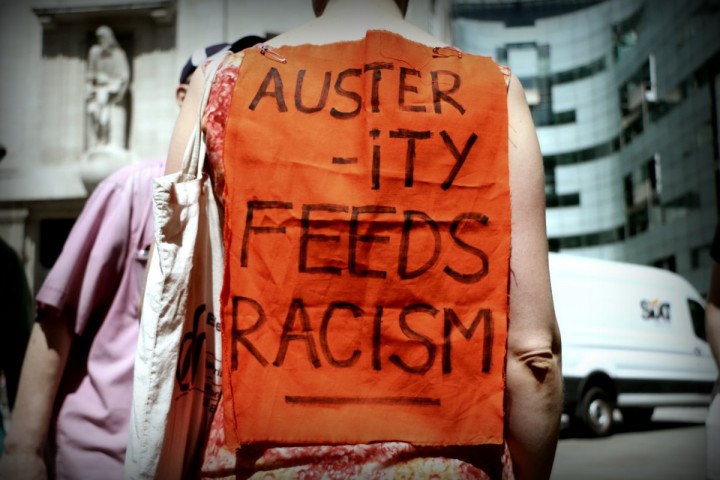 The racism report is part of a brazen attempt by the Tories to pit the so-called white working class against ethnic minorities / Image: Socialist Appeal

In a section titled ‘Geography, class and ethnicity’, for example, the commission states:

“The core cities outside London, with the exception of Bristol, have been underperforming, but it is the ex-industrial and mining areas, and towns on the coastal periphery, which are the poorest and least productive places. Towns like Barnsley in South Yorkshire, Dudley in the West Midlands, Middlesbrough in the North East or Blackburn in the North West. In simple numerical terms, this is overwhelmingly a white British problem.”

This language is not accidental. It is a continuation of the way Boris Johnson campaigned for Brexit; and how the Tories ran their 2019 election campaign.

It is a cynical attempt to appeal to sections of the working class in former industrial heartlands – communities that have been destroyed by successive Tory governments and by the capitalist class. Yet Johnson and his ministers want to convince these workers that the Tory Party are somehow now on their side.

The report goes on:

“White children on free school meals lag behind every other group in Progress 8 attainment levels at secondary school. They are also least likely to progress to university. Poor white groups, and especially poor white boys, do badly in the education system everywhere, whereas in some areas at least, especially London, poor ethnic minorities are improving rapidly.”

So here we have a report into racial inequality in the UK which not only concludes that there is no structural problem, but which furthermore deliberately portrays poverty amongst white people as something that has been ignored in favour of ethnic minorities.

The report effectively puts forward a ‘zero-sum game’ argument, saying to a young white boy in Barnsley: Part of the reason your school is underfunded is because too much attention has been given to young black boys in London.

The reality is that this poverty is the direct result of austerity; of Thatcher’s attacks on the working class; and of the decimation of entire towns and communities under successive governments.

Unfortunately, the Labour leadership has tacitly bought into this same argument with its flag waving and patriotic appeals to voters in the former ‘Red Wall’ areas of the country.

Instead of putting forward class-based solutions on the question of housing, jobs, and public services – which would raise living standards for the whole of the working class, regardless of ethnicity – Keir Starmer and the Labour right wing have tried to outflank the Tories, pandering to their reactionary nationalism.

This has led the Starmer leadership to abandon the Black Lives Matter movement. And, at the same time, it has played right into the hands of the Tories, as they look to wage a distracting and divisive culture war.

It is the Tories and their attacks that are responsible for poverty and worsening living conditions. And this is something that affects the entire working class, irrespective of the colour of skin.

There is no separate ‘white working class’ as opposed to ethnic minorities. There is one working class that is made up of different ethnicities. The white boy in Barnsley and the black boy in London have the same Tory government; they suffer from the same austerity.

Racism undeniably pushes black and other people of colour further and further down. But white workers do not benefit from this. Rather, it is the capitalists who gain, using racism to force workers of different backgrounds into a race to the bottom in terms of wages and conditions.

To change society in the interests of the vast majority, therefore, we must concentrate on what unites us, not on dividing workers according to the colour of their skin

The report says that racial inequalities have decreased, especially among under 30s. Even if this were true, the last few decades have seen massive increases in terms of class and wealth inequalities.

So it is not that black people are much better off than they were before; it’s simply that all sections of the working class have seen their living conditions squeezed. Racial gaps may be getting smaller (although this is still speculative), but the class gap is growing.

Furthermore, it is class questions that are responsible for many of the racial inequalities that we see today. For example, a large part of the higher COVID death rate amongst BAME people is because of the worse working conditions and social conditions that these sections of the working class face: more likely to be in ‘essential worker’ roles; more likely to rely on public transport; and more likely to live in cramped accommodation.

Similarly, as we have explained previously, there are a number of systemic factors that lie behind the greater vaccination scepticism seen amongst black people.

Therefore, it is not a case of ‘class vs race’, as the Tories want to say. Rather, class-based inequality and racism are deeply interlinked. And the common problem is the oppressive capitalist system and its racist political representatives – including the Tories.

The solution to both institutional racism and to poverty amongst the ‘white working class’ is the same: It is class-based – and it requires a united struggle by workers and youth to overthrow the capitalist system.

The report is breathtaking in its unashamed approach. The Tories have simply gaslighted entire ethnic minority communities, declaring that there are no real problems when it comes to racism in the UK. This is a kick in the face to these oppressed layers of society, displaying the callousness of the ruling class and its political representatives in Britain.

But rather than putting the issue of racism to bed, this report will no doubt provoke a backlash. If anything, the establishment’s denial of institutional racism will only vindicate and embolden those who have come out onto the streets to protest against racism and oppression over the last year. After all, in effect, this report is a declaration of war on the Black Lives Matter movement.

Labour and the trade unions must reject this report in its entirety. Instead, they should link up with the radicalised youth in the BLM movement, and unite all sections of the working class in opposition to the Tories and the capitalist system – a system based on racism, oppression, and the exploitation of all workers.