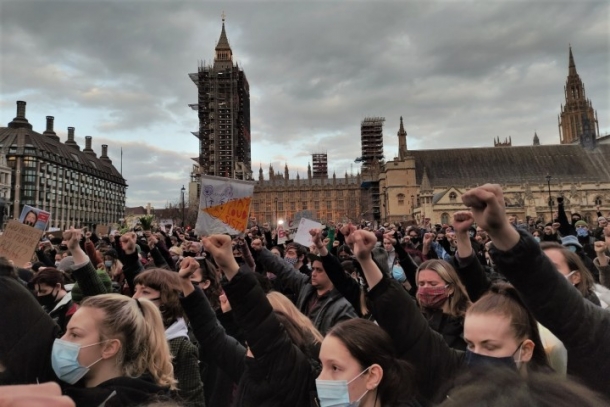 In the wake of the murder of Sarah Everard, and the subsequent police suppression of a vigil in her memory, protestors have taken to the streets across Britain. We must mobilise to overthrow this entire oppressive, violent, and repressive system. Speakers from Socialist Appeal (British section of the IMT) will address these events at a free public rally today at 7PM GMT, register here.

The horrific murder of Sarah Everard has led to an eruption of anger and protest. Across the country, thousands have come out onto the streets in recent days to denounce this whole violent, oppressive system. See below for reports of demos in London, Manchester, and Leeds.

But these demonstrations have been met with brutal repression – both from the police; and from the Tories, who are seeking to strengthen the state and restrict the right to protest with draconian new laws, under the name of the Police, Crime, Sentencing and Courts Bill.

We must organise and mobilise to smash through these laws; topple the Tory government; and bring down this rotten and repressive system. To end violence against women, we must fight to end capitalism.

TUESDAY 16 MARCH, 7PM GMT: Join activists and speakers from Socialist Appeal and the International Marxist Tendency for an important discussion on how we can fight to end violence against women – and end the capitalism system. Register via Zoom here or set a reminder for the livestream below.

Last night, hundreds of people demonstrated in Parliament Square against violence towards women, and also against the new draconian anti-protest laws being discussed in Parliament the same day.

The anger towards the police was palpable, with signs reading ‘racist, sexist police!’. At the same time, chants of "kill the bill!" could be heard, in response to the repressive bill limiting the right to protest.

This bill, if successful, would mean that someone who damages a statue could go to prison for longer than someone convicted of the rape or murder of a woman, among other abhorrent injustices.

Protesters also demanded the removal of the Metropolitan chief Cressida Dick – and not for more powers to be given to the Met and police officers!

Thousands gathered at Parliament Square to protest against #PoliceBrutality following the horrific death of Sarah Everard. The demands are loud and clear: #EndViolenceAgainstWomen and #KillTheBill that would afford the police more powers.

Those demonstrating were not just angry at the police, but at the whole system – a system that allows streets to be unsafe for women.

Speaking to Socialist Appeal activists, one protester said: “This government has shown how little they care for people, and how they care for profit above all else. This world is killing us – we have to fight against it!”

There were many radical speeches, including from the group Sisters Uncut. These speeches echoed the feelings of anger against a system that perpetuates violence and oppression towards women, but which is also ready to take away our democratic right to protest.

Left-wing Labour MP Apsana Begum came out of Parliament to address the crowd. Apsana stated that she would be voting against the Police, Crime, Sentencing and Courts Bill, which she asserted would make it easier to open further juvenile detention centres.

Speeches came to an abrupt finish as police forced the crowds away from Parliament Square, only to block demonstrators on Westminster Bridge. Nevertheless, protesters continued to march around London shouting, “Whose streets? Our streets!”

Police arrested four people in relation to last night’s demonstration in London. But this number will be far higher – and the consequences will be far harsher – should the Police, Crime, Sentencing and Courts Bill pass through parliament. We must mobilise and organise to smash through this repressive law.

On Sunday 14 March, the day after the police ‘mishandling’ of the vigil for Sarah Everard in Clapham Commons, Socialist Appeal activists attended a demonstration in St. Peter’s Square in Manchester. This is the site of the Peterloo Massacre, which led to the establishment of the modern police force. 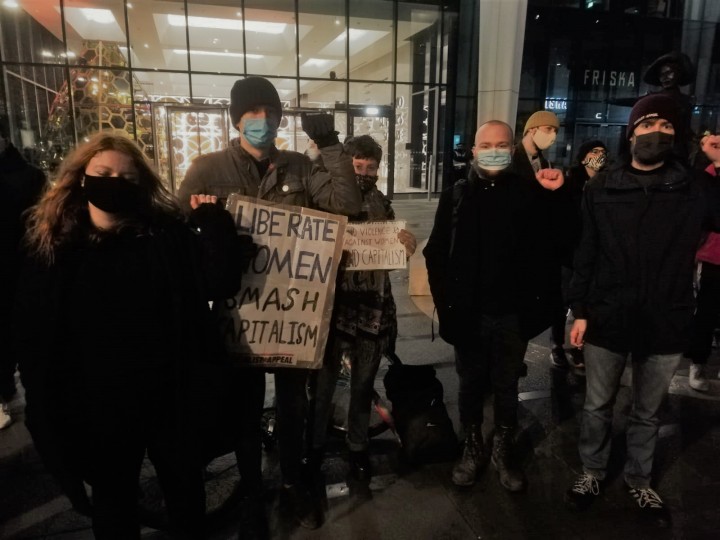 Sunday’s demo remembered the life of Everard, and that of other murdered women. But it was also a protest against the actions of the Metropolitan Police and the Tory government.

The demonstration captured a more revolutionary mood. The speakers’ platform, close to the statue of Emmeline Pankhurst, was open to all; and many women took the opportunity to speak about sexual violence and the systemic oppression of women.

Other speakers expressed disillusionment and anger at the police and the state, and demanded justice. The language used indicated a tentative, but unambiguous, radicalisation in consciousness.

Many of the speakers lit upon the need for working-class solidarity. As such, one Socialist Appeal comrade took to the platform to focus more attention on the international class struggle.

She concluded that the only solution to oppression is socialist revolution. This call was met with sincere and enthusiastic applause.

Although impromptu, the demonstration appeared to express the anger and disillusionment of an increasingly radicalised layer of society – an anger against the status quo and against a system that does not protect us.

This mood of anger foreshadows the mass movements that are sure to come. 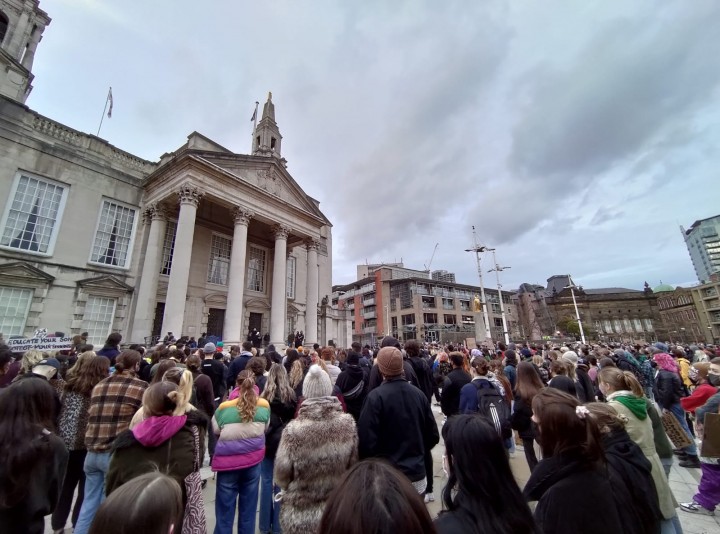 The tragic murder of Sarah Everard has led to vigils and protests being organised all over Britain.

On 15 March, Sisters Uncut organised a protest in Leeds, where upwards of 500 people stood united in Millennium Square to denounce the putrid system that allows – and even facilitates – daily violence against women.

A number of Socialist Appeal activists attended the demonstration. And when event organisers asked on social media for people who would like to speak, one of our comrades put themselves forward to give a speech on behalf of the Leeds Marxists Society.

This comrade received by far the biggest applause of any of the speakers. This is because her speech made it very clear what the causes of women’s oppression are from a materialist perspective. (See video below from 18:48 onwards).

At the same time, the comrade highlighted that having a ‘diverse’ group of oppressors does nothing for the safety of ordinary women.

The response from the crowd was indicative of the current mood in society: absolute outrage, as more and more ordinary people realise just how deep these issues run – right down to the rotten core of the capitalist system.

We are clearly approaching a tipping point, with women everywhere standing up and saying “we have suffered enough!”

Many of the speeches heavily criticised the Police, Crime, Sentencing and Courts Bill. The Tory attempt to introduce this new law highlights just how frail our rights and freedoms are under the rapidly decaying capitalist system.

How can the ruling class claim that we live in a ‘free, fair, and democratic' society, whilst simultaneously infringing on our right to protest against their oppression of us?

After the speeches, everyone in attendance lay on the floor whilst observing a minute’s silence for all the women whose lives have been lost to violence. This was followed by the reading of the names of the 194 women who have been killed by the police, in prison, or in state custody since the 1970s.

We will not stand idly by while the system that is supposed to protect us does exactly the opposite. We cannot let the establishment and their state apparatus dictate to us when we can and cannot protest. We must fight to end capitalism.