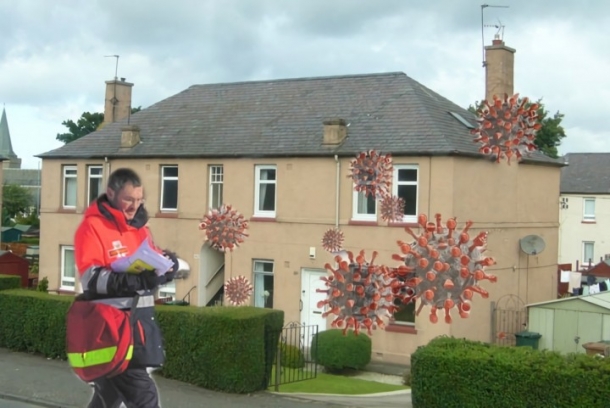 Postal workers have hit pause on their strike action over job cuts and conditions. Instead, they have called for Royal Mail to be transformed into an emergency service to aid the vulnerable. This requires public ownership and workers’ control.

It was only two weeks ago that the result of the recent postal workers’ ballot was being announced. This was carried out by the CWU in relation to proposed strike action over jobs and conditions.

Although the result was a massive Yes vote for action, it was already clear then that events were rapidly moving on. Instead of strike action, the spiraling spread of the coronavirus pandemic was demanding that workers should take the lead in protecting communities and the vulnerable.

As such, the union raised the call for Royal Mail to be transformed into an emergency service for the duration of the crisis.

The logic behind this idea was obvious - so obvious, you wonder why neither management or the government hadn’t already thought of it themselves. The trouble is, when you are only interested in protecting the profits of the bosses, these ideas just pass you by.

For postal workers who spend their lives in daily contact with ordinary people across the country, however, the proposal made immediate sense.

Firstly, in Royal Mail you have a distribution system that can move items quickly, and to just about anywhere.

Secondly the posties on the ground already have a fairly extensive knowledge of where all the elderly and vulnerable people live. In this way, they could easily act as a contact point, providing deliveries and collections where needed.

For many people, the postie has been their only contact with the outside world. In other words, postal workers are a huge human resource that is already trusted by people, and who can help to minimise the dangers now being posed by the virus outbreak.

We’ve always known our members were heroes. Now they are dressing up as them ?‍♂️ https://t.co/CCPXshdgfn

So the demand to re-tool the mail system as a public service makes a lot of sense during this difficult period of social distancing and self-isolation. Indeed, Ireland has already done this with its postal service.

Yet two weeks later, there has been little movement on this from those at the top. Instead, postal workers' lives are being put under threat by the management dragging their feet.

Thanks to union pressure, Royal Mail bosses have temporarily put trial runs for their various schemes on hold, along with the 2024 strategy plan. But it is clear that management are still trying to run things on the basis of business as usual - i.e. profits as usual!

As a result, the main source of anger in the depots and sorting offices over the last week or so has been around safety concerns. The very nature of the job involves close contact with both other staff and with the public at large. Yet, despite new guidelines being issued by management at head office, there is every indication that these are still only being applied in some areas. This cannot go on.

The CWU has made it clear that van-sharing must cease; arrangements to ensure social distancing must be implemented; proper assurances must be given to at-risk staff; adequate sanitation resources must be made available, and so on. Particular concerns have been raised about Customer Service Points (CSPs) and call-centre operations, as well as post offices.

The union has rightly noted that all of this highlights how we do not have a system designed to provide a service, or to aid a workforce operating under extremely difficult conditions. Instead, the setup is one designed to maximise profits at workers’ expense. As such, at a time of national crisis, management has been dithering on, just trying to protect their revenue stream.

This has gone on long enough. We need to be able to protect Royal Mail workers. The postal service - this vital resource - must not be used as a profit-making machine, but as means of supporting communities, the vulnerable, and the elderly.

What we are seeing is the systematic failure of privatisation and the market across the board to be able to put people’s lives before profits. Royal Mail bosses certainly don’t seem capable.

The union has now made public a letter in which it outlines the minimum steps necessary to protect postal workers, and at the same time enable essential collections and deliveries to be made. This means putting a stop to the delivering of what is, in effect, junk mail.

These key demands include:

The union has also issued the following statement, noting that it will act at a local level where there is evidence that health and safety concerns are not being fully addressed:

“If any CWU member does not feel safe at work through lack of social distancing or personal protective equipment, they should not work. We will support any individual member or office that takes this position. This is not a call for workers to take unofficial industrial action, but it is a clear statement on the grounds of health and safety that we will support our members.”

This reflects the mood of anger that is building up amongst postal workers - and across industry in general. Workers everywhere are furious at unscrupulous bosses, who are attempting to maintain production and construction without putting the necessary protections in place.

In response, we are already beginning to see walkouts in a number of sectors, as workers rightly refuse to put their lives on the line. Royal Mail shop stewards must be ready to take the lead on this and shut sites down if they are deemed unsafe. Postal workers will expect nothing less. Royal Mail shop stewards must be ready to take the lead on this and shut sites down if they are deemed unsafe / Image: fair useOn top of any action taken directly by workers to bypass management failings, the call must be made once again for Royal Mail to be taken back into public ownership. Labour must demand this as an immediate emergency measure.

Workers on the ground must now be given the power to decide upon and implement safety procedures, and to turn the whole organisation towards being an emergency service - one run for the millions not the millionaires.

Indeed, at this time of deep crisis, all the essential sections of the economy should be brought into public ownership.

Instead, we are seeing thousands and thousands of workers being forced to go to work - crammed into packed tube trains and risking their lives to help protect the ‘essential’ profits of the bosses.

The establishment has no trouble finding the time to attack people who have been panic buying in supermarkets (presumably we should all just starve now), whereas the profiteering and spivery of the rich goes unnoted.

One thing is clear: the covid-19 crisis has exposed the gaping class divide in society. One class - the capitalists - are only interested in protecting their profits and wealth. The other is fighting to protect ordinary people - the poor, the sick, and the elderly - from the impacts of the pandemic. When the immediate danger of disease has passed, workers will not forget this vital lesson.