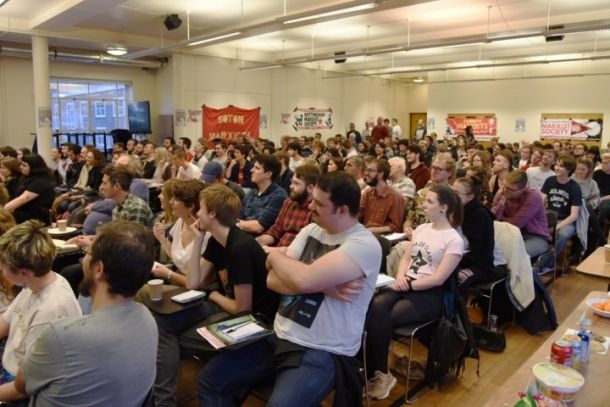 On 19-21 October, around 300 Marxists from Britain, Europe and beyond gathered in London for the annual Revolution Festival. This year’s festival commemorated the inspiring events of 1968, half a century on. The weekend provided an inspirational experience for all comrades present, with the political level of contributions throughout the discussions being higher than ever before.

What was particularly noticeable over the weekend was the youthful composition of those in attendance, with the vast majority of those present being under the age of 30.

This is evidence of the effect that the global crisis of capitalism has had on radicalising the consciousness of young people, leading to a resurgent interest in the ideas of Marxism. And it is this radicalisation of a new generation and thirst for revolutionary ideas that fills us with optimism about the struggles ahead.

The weekend began on the Friday night with a rally on the topic of Rosa Luxemburg and the German Revolution.

This session doubled as the launch for a new book being published by Wellred Books, called Germany 1918-1933: Socialism or Barbarism.

The book’s author, Rob Sewell, addressed a full room, explaining that the defeat of the German Revolution was disastrous for the working class. Not only did it pave the way for the rise of fascism, but also for the degeneration of the Russian Revolution into Stalinism.

With the revolution failing to spread internationally to the economically advanced countries, the Soviet Union become isolated, providing the material basis for the development of the Stalinist bureaucracy.

Marie Frederiksen, editor of the Danish Marxist publication Revolution, also addressed the rally about the subject of her new book, Reclaiming Rosa Luxemburg: a true revolutionary.

Marie pointed out that Luxemburg has faced criticism over the years from both Stalinists and reformists. But whilst it is true that she made mistakes, her murder was nevertheless a significant blow to revolutionary forces in Germany.

The primary lesson to be learnt from the failure of the German Revolution, both speakers emphasised, was the need to build a revolutionary party in advance of such big events – a party that can lead the working class to the successful overthrow of capitalism.

For most of the second day of the festival there were multiple discussions taking place in parallel sessions. Topics included: Martin Luther King; the first 100 days in power for Corbyn; the origins of capitalism; the Suffragettes; what is money?; morality; artificial intelligence; and trade wars. 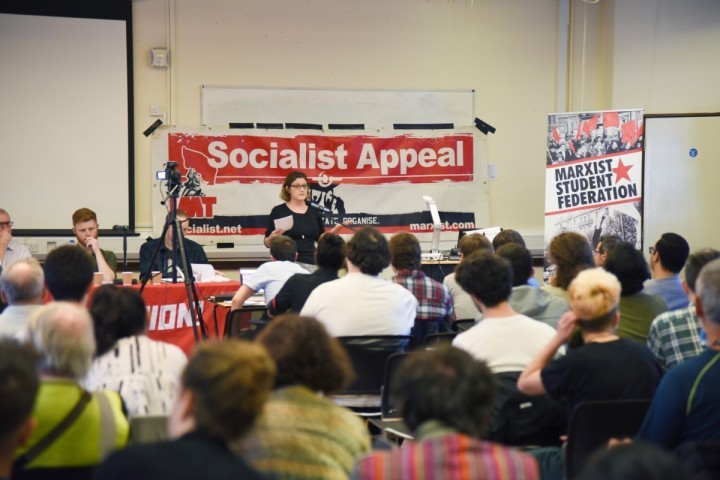 In an important session, three speakers from Britain, Sweden, and Austria talked about the rise of the far right in these respective countries, and explained how the left should respond / Image: Socialist Appeal

One key session was the panel discussion on how to fight the far right. This is a topic that has gained increased prominence in Britain with the rise of the Tommy Robinson movement and the ‘Democratic Football Lads Alliance’.

Three speakers from Britain, Sweden, and Austria talked about the rise of the far right in these respective countries, and explained how the left should respond.

Speakers from across Europe emphasised that the fight is one that is ongoing across the world. And it is the weakness of leadership at the top of the labour movement leadership that is holding the working class back in this fight.

The Saturday concluded with a rally to commemorate the key event of 1968: the revolutionary general strike of May ‘68 in France.

Before the keynote speech on this topic, the audience was addressed by PCS trade unionist and national executive member Martin Cavanagh, who talked about the fight against austerity. 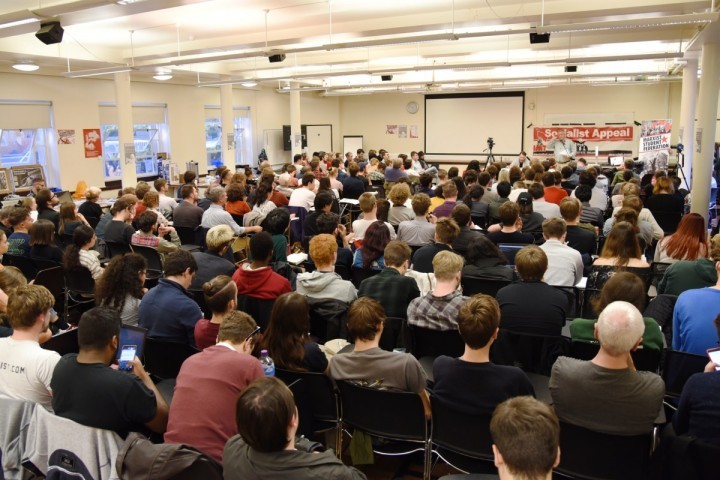 The Saturday concluded with a rally to commemorate the revolutionary general strike of May ‘68 in France / Image: Socialist Appeal

The main speech was then given by Alan Woods, political editor of In Defence of Marxism, who addressed the packed room on the extraordinary events of the 1968 French Revolution.

Drawing on his own personal experiences of participating in this mass movement at the time, Alan spoke about how close the working class came to seizing power. Ultimately it was only the betrayals of the movement’s leadership that prevented the working class from coming to power and ending capitalism.

Alan emphasised, however, that we shouldn’t simply reminisce about these events. Rather, we must learn from their mistakes to make sure that in future struggles the revolution will be carried through to the end, ensuring that the heroism of the workers will not be in vain.

The final day of the festival was again filled with a variety of discussions taking place across three rooms. Topics included: Oliver Cromwell; women’s liberation; the Vietnam War; the 2008 crash; Latin America; dialectics; the crisis of liberalism; and the Prague Spring. 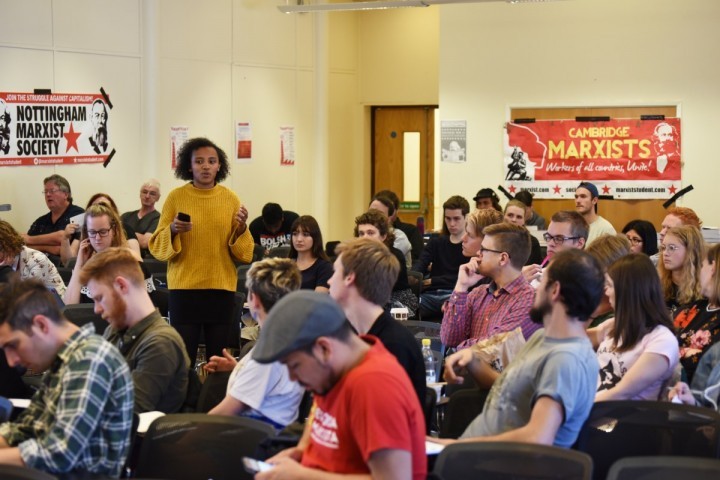 The final day of the festival was filled with a variety of discussions on Oliver Cromwell; women’s liberation; the Vietnam War and the Prague Spring / Image: Socialist Appeal

One particularly interesting discussion was on the life and ideas of James Connolly and the struggle for Irish independence. Ben Curry of the Socialist Appeal editorial board spoke on how the legacy and revolutionary ideas of Connolly are often misrepresented, turning him simply into a noble martyr.

But Connolly was a committed Marxist who fought to the death not just for Irish independence, but for international socialism. As Connolly himself emphasised: “If you remove the English army tomorrow and hoist the green flag over Dublin Castle, unless you set about the organisation of the Socialist Republic your efforts would be in vain”.

The festival concluded with a final rally in which Alan Woods explained why we need a revolution. Alan spoke on the deep crisis facing capitalism and how we need to build a revolutionary leadership in order to abolish this broken system.

Even Francis Fukuyama, who once talked about liberalism being the “end of history”, now admits that there has been a resurgence of Marxist ideas amongst young people, Alan noted. 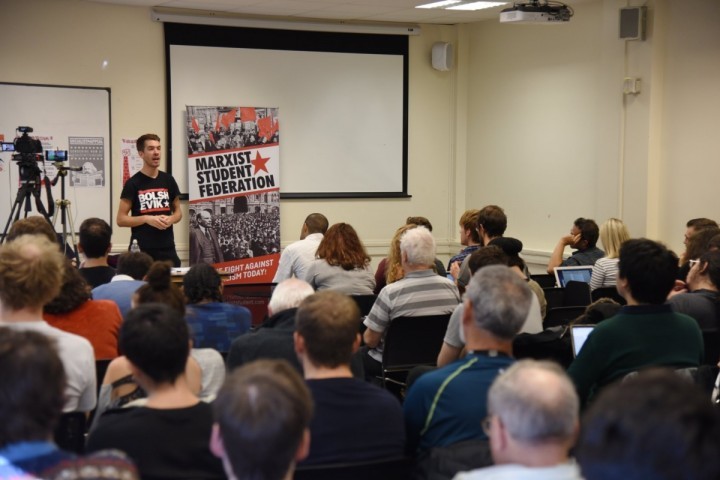 Rather than the collapse of the Soviet Union marking the end of history, therefore, we can now see that those events were merely a prelude to a far more significant collapse: that of the rotten capitalist system.

The rally concluded with a stirring rendition of the Internationale, with the international attendance of the festival reflected in the number of languages that this revolutionary song was sung in.

Across the board, the feedback from attendees – both new and experienced – was that this year’s festival was inspiring and informative, providing everyone who took part with a massive boost in their confidence in Marxist ideas.

50 years ago, the ruling class across the world trembled at the revolutionary events of 1968. Today, when revolutionary movements break out once more, we are determined to be in the right place with the right ideas – with the forces necessary to end the crisis-ridden capitalist system once-and-for-all.