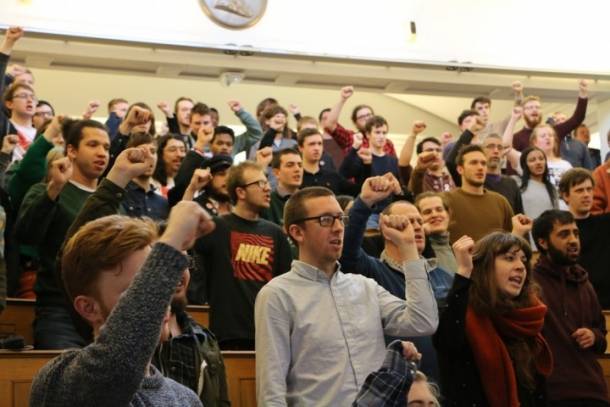 One decade on from the onset of the Great Recession, and British society is undergoing a series of crises: economic, political, and social. The status quo has broken; the centre ground has collapsed; political polarisation and radicalisation is taking place everywhere.

Britain, which was once one of the most stable countries in Europe, has become an incredible source of instability and volatility. From the Scottish independence referendum to the Brexit vote and the rise of the Corbyn movement: the UK has experienced one political earthquake after another.

It was against this backdrop that the Marxists in Britain met for this year’s national conference of Socialist Appeal supporters and activists. 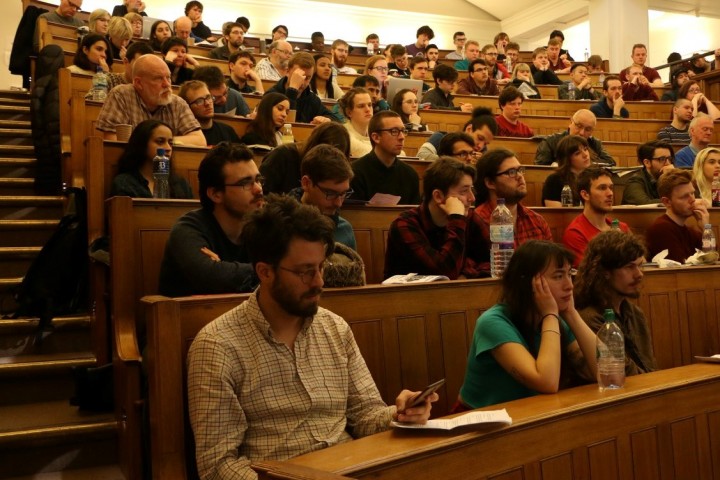 Over the weekend of 16-18 March, around 140 workers and students met in London to discuss the political situation globally and in Britain, as well as the pressing tasks that are required to prepare for the revolutionary events that lie ahead.

The mood at the conference was one of optimism and enthusiasm. This was reflected in the impressive conference collection, which raised a record £16,000 for the Socialist Appeal fighting fund.

This feeling of optimism sits in stark contrast to the doom-and-gloom of the capitalist establishment and their apologists, who can see no way out of the crisis. Unlike the cynics and sceptics, the Marxists are filled with revolutionary hope and energy – inspired by the mass movements that are breaking out in Britain and internationally.

A decade of crisis

Alan Woods, editor of In Defence of Marxism, opened the conference on the Friday evening with an analysis of the world situation.

Never before has there been so much to discuss, Alan noted. Everywhere you look there is crisis and radicalisation taking place. For this reason, Alan focussed on providing an overview of the precarious economic picture globally. 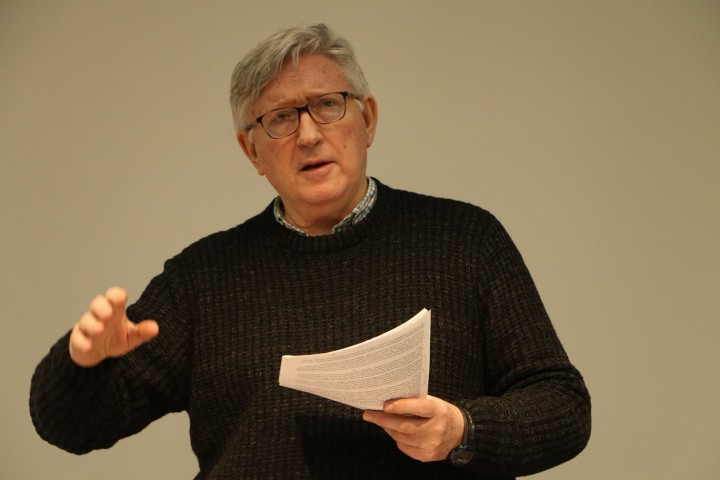 Alan Woods gave a balance sheet of a decade of crisis and radicalisation / Image: Socialist Appeal

Alan explained the causes for the 2008 financial crash, emphasising that none of these fundamental contradictions had been resolved. Indeed, with Trump acting like a bull in a china shop, declaring a trade war against the rest of the world, there is a very real danger that the world economy will soon be plunged into a new – deeper – slump.

Alan discussed how the heightened economic tensions were spilling over into world relations – particularly those between the USA and China. At the same time, the vote for Brexit and the crisis in the Middle East have created yet more flash points that threaten the stability of the entire system.

Above all, Alan stressed that it is the change in consciousness that we as Marxists are interested in. This sharp shift is demonstrated by the rise of Corbyn and Sanders, the militant events in Catalonia (and now also in the rest of Spain), and by recent elections in Italy and Germany.

Contributions elaborated on these examples, with comrades providing more in-depth analyses of events in China, Europe, Iran, and South Africa.

Above all, as several comrades noted, it is important to understand that these are not isolated or accidental events. Rather, they are all reflections of the same general process: a break up of the old order, with the masses searching for an alternative.

This discussion on world perspectives provided an essential context to understanding events in Britain.

Rob Sewell, editor of Socialist Appeal, introduced the discussion on the political situation in Britain on the Saturday morning.

Rob spoke passionately about the devastating picture facing workers and youth in the UK after eight years of Tory austerity. On top of this, Rob explained, there are the scars from decades of deindustrialisation, privatisation, and attacks on the working class. 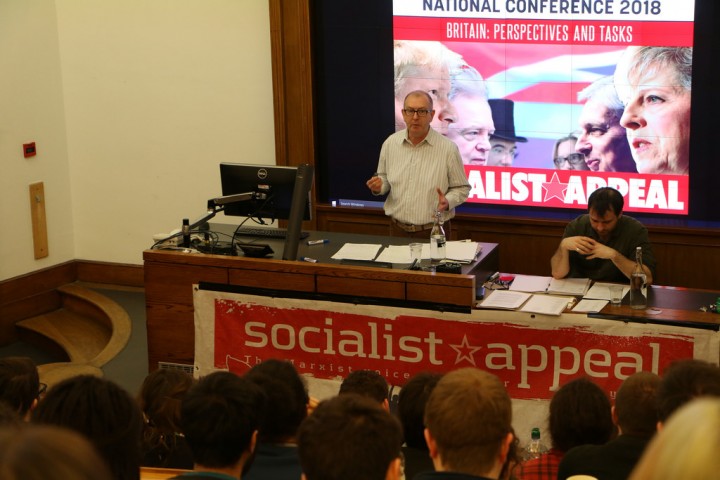 Now the country is at breaking point, however, as reflected by the political earthquakes that have shaken society over the past few years.

Above all, the Brexit vote has thrown the UK into the eye of the storm. All of the confidence of the British establishment has been shattered and turned into its opposite. The Tories, the traditional First XI of British capitalism, are at war with themselves, with figures like Jacob Rees-Mogg and Boris Johnson prepared to lead the country over a cliff.

“As Lenin and Trotsky explained,” Rob stated, “revolution always begins with splits at the top.”

It is clear that the ruling class has lost control of their political representatives – not only in terms of the Conservative Party, but also within the Labour Party, as the Blairites find themselves on the backfoot.

Following a series of scandals and crises, Theresa May is hanging on by a thread. Her government could topple at any moment, Rob stressed, with the ‘unelectable’ Corbyn coming to power.

Nevertheless, Rob emphasised, a Corbyn Labour government would find itself under attack from day one. Economic sabotage and Blairite backstabbing would be on the order the day. 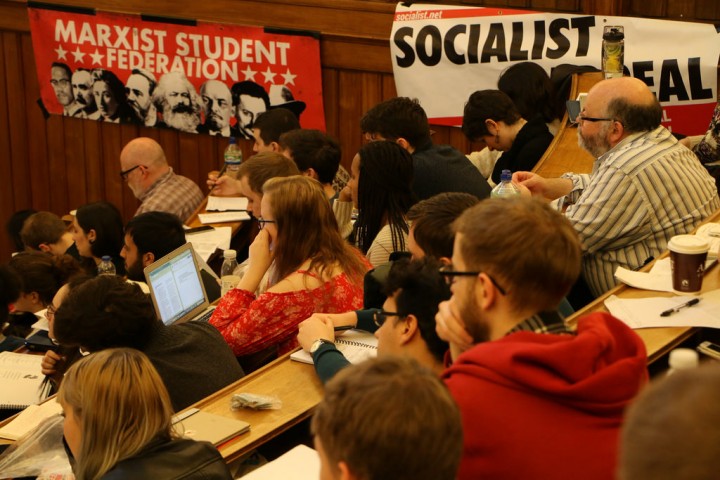 In every aspect, the trend for the British comrades is upwards! / Image: Socialist Appeal

Out of desperation, the ruling class might attempt to maintain control through a national government. But this would only serve to radicalise the movement even further to the left, putting socialism back on the agenda. Under these conditions, Rob explained, the ideas of Marxism could become a rallying point for thousands of workers and youth.

A number of comrades spoke in the ensuing discussion, developing a number of key points. A couple of UCU members, for example, highlighted the militant strike action by lecturers and academics over the past month.

Elsewhere, several young workers talked about the horrific conditions they face in modern-day workplaces (such as the NHS, Amazon, and McDonald's). These precarious and exploitative conditions, comrades noted, are contributing towards a feeling of intense anger and radicalisation amongst young people.

Many comrades analysed Labour’s position on important questions such as Brexit and the economy, discussing how only a bold socialist programme could provide a genuine alternative for the working class. The task for the Marxists in Britain is to build a force capable of showing the way forward in this respect.

Building the forces of Marxism

Saturday ended with a brief overview from Niklas Albin Svensson of the IMT about the successes of the Marxists internationally. From Canada to Pakistan, the International Marxist Tendency is seeing a strong growth in interest for the ideas of Marxism across the globe.

This was a fitting basis for Sunday’s discussion about how to build the forces of Marxism in Britain.

Ben Gliniecki, a Socialist Appeal activist and national organiser for the Marxist Student Federation (MSF), introduced the session with an overview of the work and activity that Socialist Appeal supporters have been involved in over the past year.

In every aspect, the trend is upwards. The MSF was present at 32 universities for this year’s freshers fairs. Three Socialist Appeal supporters and MSF activists have been elected as delegates to the upcoming conference of the National Union of Students. And student comrades have been consistently and enthusiastically showing solidarity and support on picket lines across the country for the recent UCU strikes.

Elsewhere, comrades in the labour movement have taken in the initiative of launching the Labour4Clause4 campaign, which has hit the headlines with its calls for the Labour Party to restore its commitment to nationalisation and common ownership. This provides clear evidence of the appetite for socialist policies that exists amongst the working class. 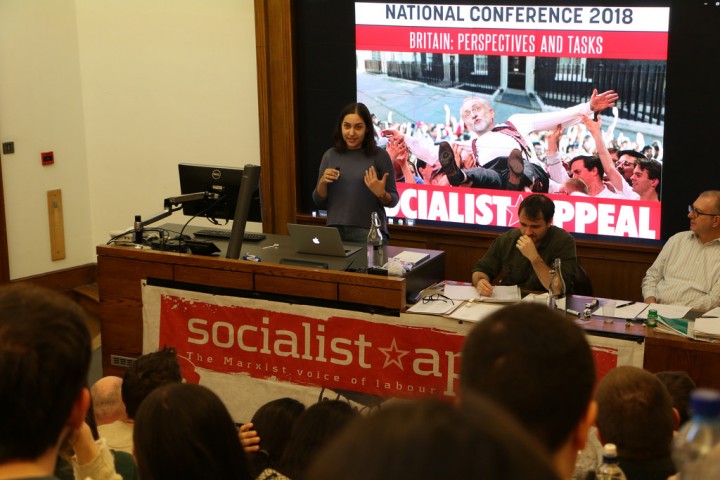 James Kilby, national organiser of the Socialist Appeal newspaper, spoke about the success of the fortnightly paper, which has seen increased sales in all areas of the country. With events moving at a faster and faster pace, there is a need for an even more frequent paper. At the end of the day, nobody in the mainstream – billionaire – press is going to provide a voice for the struggles of workers and youth.

Various comrades spoke about the activities that local Socialist Appeal supporters groups have been involved in over the past 12 months. From strikes and campaigns, to reading groups and occupations: it has been an extraordinarily busy year, reflecting the extraordinary times that we are living through.

Alan Woods closed the conference by noting that we are in a year of anniversaries. 2017 marked the centenary of the Russian Revolution – the greatest event in human history. This year, in turn, is the 50th anniversary for the revolutionary events of 1968; in particular, the inspiring mass movement of workers and students in France.

Most importantly, this year (on 5 May) we will be celebrating the 200th birthday of our movement’s founder: Karl Marx. Just over a month ago, Alan also noted, saw the 170th anniversary of the Communist Manifesto’s publication, written at the beginning of 1848 by Marx and Engels.

Despite their age, however, the ideas of Marxism have never been more relevant, Alan asserted. “There is an obsession these days with ‘new ideas’,” Alan joked, “but an idea is not correct because it is novel.” Indeed, universities these days, Alan complained, are full of all sorts of weird and wonderful ideas that play no positive role for the movement. 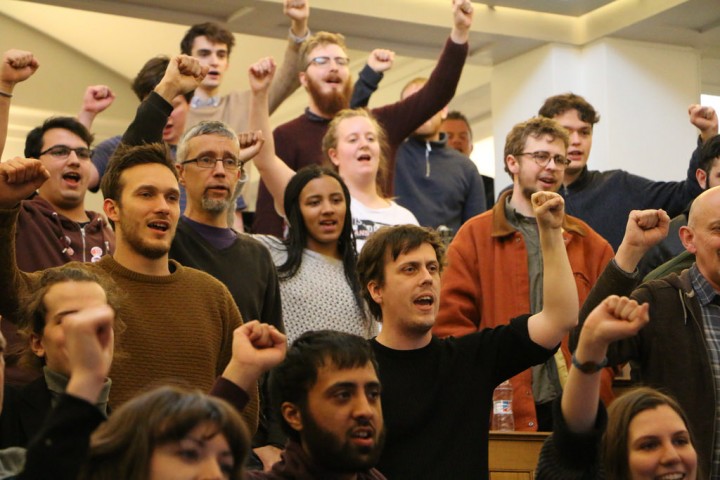 Our task is to turn Marxist ideas ideas into a material force capable of emancipating humanity / Image: Socialist Appeal

With turbulent events violently shaking consciousness, the revolutionary ideas of Marxism are increasingly gaining an echo amongst workers and young people. It is our task, in the words of Marx, to turn these ideas into a material force capable of changing society and emancipating humanity.

This is the task that Socialist Appeal and the International Marxist Tendency are fighting to achieve. We encourage and invite our readers to join us in this fight.