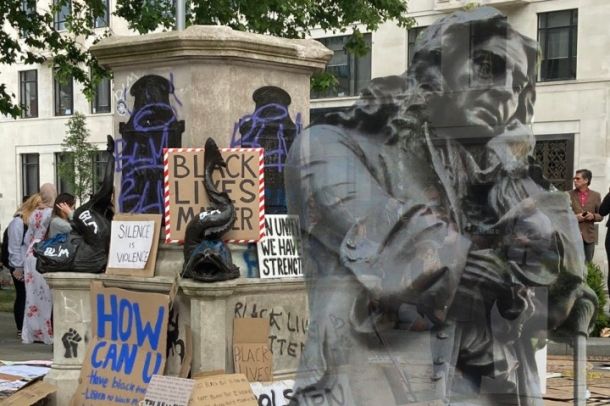 The British establishment is attempting to divert the movement against racism down safe-channels – turning the struggle into a polarising ‘culture war’, and offering tokenistic gestures. Instead, we must fight for socialist change.

The ruling class has raised a hue and cry over the toppling of the statue of slave-trader Edward Colston in Bristol, since it was thrown into the River Avon by local activists on 7 June.

This wasn't meant to have happened in our ‘civilised’ parliamentary democracy. Protesters have been described as ‘thugs’ and ‘vandals’ by Boris Johnson and other Tory ministers for not following the ‘proper channels’. But the fact is that the Bristol demonstrators achieved in a few hours what years of polite appeals had failed to do.

Notably, this mass direct action has forced the authorities across the country to take steps to remove other monuments to imperialism and colonialism.

A statue of slaveholder Robert Milligan outside the Museum of London Docklands has already been taken down, for example. And Oriel College in Oxford University recently voted to look into removing the statue of notorious British colonialist Cecil Rhodes, thanks to huge street protests organised by the ‘Rhodes Must Fall’ campaign.

"A statue of Robert Milligan is removed by workers from outside the Museum of London Docklands near Canary Wharf following the death of George Floyd who died in police custody in Minneapolis, London, Britain, June 9."
Pic: John Sibley/Reuters pic.twitter.com/zhcxCXAKmS

Events in Britain have even had international ramifications. Statues of brutal Belgian imperialist Leopold II have been set on fire and defaced in Antwerp and elsewhere. And there have been calls for Confederate monuments to be taken down across the USA.

The statue of genocidal maniac and king of Belgium, #Leopold_II, has finally been removed from the area of Ekeren in #Antwerpen, after having been covered in paint and set on fire by activists. #belgium #genocide #racist #just_saying pic.twitter.com/MWrs8F3woI

Back home, the ensuing debate has finally shone some light on Britain’s colonial history – a useful reminder of how much of the ‘old wealth’ of capitalism is very much built on racism, slavery, and imperialism.

Labour leader Keir Starmer, however, has offered only a mealy-mouthed response. Starmer scandalously condemned the Bristol protesters for taking matters into their own hands; conveniently forgetting about the struggles taken by the labour movement and the oppressed throughout history – often involving illegal methods – in the face of blatant injustice.

Keir Starmer condemns anti-black racism and shows solidarity with protesters by *reads teleprompter* refusing to stand with black MPs, simping for statues of slavers, not being a signatory to 166 other MPs’ letter calling for suspension of sales of riot gear to the US

Keir Starmer and the other Labour right-wingers who have denounced activists’ recent efforts would do well to remember that real historical change is never obtained by appealing to the ruling class through the ‘proper channels’, but by the working class uniting to organise and fight for progress.

Socialists wholeheartedly support the pulling down of statues like Colston and Rhodes. This form of mass direct action is not merely symbolic, but can also have a powerful effect on consciousness, giving workers and youth the confidence to trust in themselves and take bold action. It shows concretely that militancy pays.

At the same time, these protests have set off all sorts of alarm bells for the establishment. They have called it ‘mob rule’, and are petrified precisely because they cannot control it.

In turn, far-right thugs and Tory backbenchers alike have rallied to ‘defend Britain’s history and heritage’. On Saturday 13 June, for example, in farcical scenes, fascist hooligans and flag-waving ultras descended on London to ‘protect’ the statue of Winston Churchill that sits outside Parliament.

Prominent Tory MPs such as Ben Bradley, meanwhile, have been outspoken in asserting that “a Conservative government [should] be the staunch defender of our heritage, and take a strong stance on law and order”.

“Ministers must step up and say that our history is ours and we will not tolerate it being torn down”, the Conservative MP for Mansfield demanded in the Telegraph.

The ruling class is desperate to divert the movement against racism into the territory of so-called ‘culture wars’ – for example, with the removal of a Fawlty Towers episode by the BBC.

But this is clearly not what the BLM movement is fighting for. It is a distraction to focus attention on these incidental examples, and to talk about culture instead of class. All this does is to sow confusion and division amongst the working class, and sidetrack the fight against systemic, institutionalised racism.

The establishment are actively whipping up and weaponising a ‘patriotic’ and nationalist backlash. The way to combat this is for the BLM movement to join forces with the labour movement: to drive the far right off our streets; to fight for real material improvements such as jobs, housing, and fully-funded public services for all; and to unite together to kick out this racist Tory government.

Renaming buildings and removing statues is a first step. But in order to have a real impact on the lives of BAME people, this must be the spark for genuine social change.

We must not allow these measures to become mere cheap tokenistic gestures by the establishment. For example, Tower Hamlets council has helped to remove the aforementioned Milligan statue in East London. Meanwhile, however, it is cutting services that working-class BAME people rely on.

Similarly, local authorities across the country are pledging to investigate what antiquated monuments or street names need to be removed. Yet they have done nothing to remove the dangerous cladding that remains on council estates up-and-down Britain – accommodation often inhabited by BAME communities.

It is therefore utter hypocrisy for politicians to say ‘Black Lives Matter’, whilst doing nothing to solve the real material issues – such as housing, jobs, and services – that lead to inequality and racism under capitalism.

To fund the sweeping measures that will genuinely address these problems, we need to expropriate the wealth of the super-rich – including the respectable ladies and gentlemen who have amassed their wealth both out of the colonial slavery of the past, and through the modern-day wage slavery of capitalism: the exploitation of the working class.

There is a very good reason why the full story about racism and colonialism is never told. If it were, the whole rotten system would be exposed. Whitewashing history helps to keep existing power relations intact, and to deflect attention from the root cause of inequality: the capitalist system.

Tearing down statues like those of Colston and Rhodes is a start. But to truly end racism, we need to tear down the whole crumbling edifice of capitalism.