Britain
Share
Tweet
Now a policy of wage restraint during a serious financial crisis is, sooner or later a finished recipe for an intensification of the class struggle in Britain. Already the strike figures for this year - before the recent financial meltdown - have outstripped last year's figures 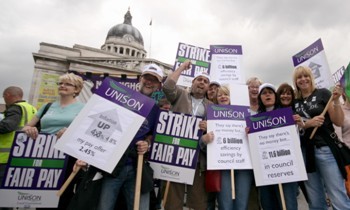 Plate tectonics is a wonderfully simple explanation of the way that deep underlying thermal currents deep within the Earth slowly push the continents around the world like a bits of a toddler’s 6 piece jigsaw. It happens imperceptibly an inch at a time and isn't obvious at ground level, but from above its obvious how far the continents have moved over time.

The trade union movement behaves in a not dissimilar fashion. The heavy weight of the trade union bureaucracy sits on top of the movement and most of the time holds back the anger and militancy of the active layers, arrives at cosy deals with the employers and appears immovable and in some case utterly dead from the neck up. But, like the earthquakes and tsunamis that wreak havoc on the people who live along the faults and plate boundaries of the earth’s crust, the pressure from below is inevitably manifested on the surface. It doesn't unfold gradually either but in an explosive way.

Leon Trotsky explained that the nice cosy relationships of the trade union leaders, even with the bourgeois state tend to breakdown on the basis of the pressure from below. In the current climate in Britain the relations between the trade union leaders and the Labour government are clearly under strain. To use the same analogy as before you need only look at the 130 resolutions and demands that were brought to the Labour Party National Policy Forum in July and compare it to the chorus of demands to "not rock the boat" throughout the Blair years, at which time it was a case of "unity at all costs".

There is an ocean of difference between that position and the resolution from the Prison Officers Association at the TUC conference for a series of one day general strikes until the anti trade union laws were repealed. Reports that we have received indicate that at least one of the major union delegations voted to support the resolution, but weren't able to lay their hands on their block voting cards, which had mysteriously disappeared! The vast majority of demands that were raised were straightforward basic stuff, the right to secondary action, improving the minimum wage and so on. Each demand reasonable and "moderate" even, but taken together they represent a big change.

It doesn't require a seismograph to work out what's going on however. The 130 demands that were taken to the Policy Forum represented the collective aspirations of hundreds of thousands and millions of workers and their families. At the time of writing financial markets are in meltdown. There is a huge uncertainty in workers minds about the future, and this has accentuated and sharpened the debate within the trade union movement. Inevitably this process found its way onto the floor of the TUC conference. There is always a lag between the real situation on the ground and the final agenda for the conference, the delegations are elected well in advance and the resolutions are composited and amended along the way.

But the fault lines are there and the pressure from below is building up; as the BBC explained:

“Delegates were angry that public sector pay appeared to be blamed for rising inflation. Mr Darling said oil and food price rises were the main cause, but oil prices had fallen and inflation was forecast to come down next year.

"That is why it would be so damaging for us to allow inflation to become entrenched here as it did in the past.
"Which is why in the public and private sectors pay rises must be consistent with our inflation target because otherwise every penny in pay rises will be quickly swallowed up in higher prices".

He agreed times were "tough" but said families and businesses would face even tougher times if "we were to throw away the stability" the government had built up." 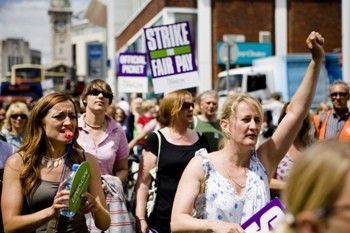 A policy of wage restraint during a serious financial crisis is, sooner or later a finished recipe for an intensification of the class struggle in Britain. The process is contradictory and complex, and to a certain extent the economic crisis has stunned some layers of the working class. The recent UNISON and Unite strike in local government is a case in point.

Many workers are more worried about their jobs and the likelihood of cuts, than whether the pay rise is 2.45% or 3.3%, they have bigger fish to fry.  However, such is the hole that Gordon has landed in, it is not ruled out that the government could blunder into a much more generalised confrontation with the unions; if not now then sooner or later. You can only stretch a rubber band so far, before it snaps. Wage restraint is a blunt instrument which angers workers, and the experience of the UNISON and Unite dispute is that there has been a distinct polarisation among the membership. But, and this is a serious but, it's not been a polarisation about accepting 2.45% but about the chances of winning the dispute.

The disputes in the civil service and the schools and colleges are still rumbling on. It's no surprise that the PCS have been in the forefront over the last period. Years of cuts, outsourcing and privatisation have created a desperate situation for many people and this has been reflected in the election of a more left leadership in a whole number of unions. What has  been obvious over the past period is the spread of discontent and action. OFSTED, Coastguards and Driving instructors aren't the most traditionally radical, but neither are the Police Federation or the Prison Officers. 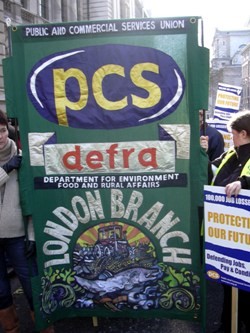 The attempts to deliver a coordinated campaign against wage restraint in the public sector have to be welcomed, but as we've pointed out before, the process has been very uneven and there are still some sectors of the union movement that are happy to hold the line. However, as the position in the health service reveals," The best-laid schemes o' mice an ' men gang aft agley". Within months of the UNISON health executive being presented with a 3 year deal that they were originally going to accept without a ballot, they have been forced to try and reopen the pay negotiations because of the rise in inflation.

It's important for Marxists to look beyond the day to day in the Labour and trade union movement, and to look at the fundamental processes taking place in society. We live in perhaps the most tumultuous and disturbed period in world history. The relative stability in Britain that underpinned 10 years of Blairism has evaporated. The financial and economic crisis will tend to unravel the position of the right wing in the movement. They are intimately tied into the capitalist system.

Workers are apprehensive and worried for the future. But there are limits to worker's patience and limits to how much pressure and how many wages cuts they can accept before they make the decision to fight back.

Some are currently reluctant to take action, while in other sectors the mood is more positive. In Scotland where the local government pay dispute involves all three major unions, UNISON, Unite and the GMB, the mood seems more united and positive. Workers aren't daft, they fight hardest when there is a chance of winning.

Already the strike figures for this year have outstripped last year, but we have been through a very long quiet period. In part this is down to the trade union laws, but not entirely. It's a long time now since the 1970s and the miners' strike was defeated. Someone who left school the year the miners' strike finished will be 40 sometime in the next 12 months. They won't have gone through those times and moods. We are at the beginning of the process and there are many lessons that will need to be relearned by the mass of members. The experience of a New Labour Government means that the right wing are utterly discredited, but the working class needs to get a sense of its own power before large layers begin to draw the conclusion that they have to become politically active. Human consciousness is incredibly elastic and there will be sharp turns and sudden changes in the mood of the masses.

The power of nature has shaped and reshaped the world over billions of years. It won't take any where near as long for the working class to begin to transform its industrial and political organisations. Events in Britain have lagged behind many countries over the last 15 or more years, but the next period promises to be radically different.