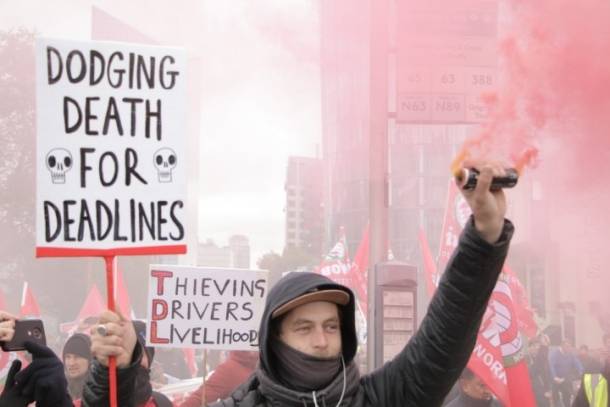 Thousands have been forced into the so-called ‘gig economy’ in recent years in order to make ends meet. But these workers have no access to basic rights such as sick pay. They face a deadly choice between infection and not eating.

The growing dependence of British capitalism on cheap labour, stripped of all employment rights, has led to a mushrooming of the phenomenon of ‘bogus self-employment’ in recent decades. Because these workers are not legally ‘employees’, they lack all of the basic rights of ordinary workers, including sick pay.

Hundreds of thousands of such bogusly self-employed workers are being forced to make a deadly choice: risk catching or spreading the covid-19 infection; or miss work and don’t eat. They are presented with this impossible choice for one reason alone: it is more profitable for the bosses to keep them ‘self-employed’ than to guarantee them proper employment rights.

With a threat like the coronavirus pandemic, bosses are putting workers in a position where they could be spreading this deadly disease to thousands of others.

A shocking letter that we received from the relative of a ‘self–employed’ driver for the delivery company Hermes illustrates this point. Socialist Appeal demands the end to such bogus self-employment and the right to paid work or full pay for all. The Tory government has forced delivery drivers to rely on universal credit to survive / Image: Musikmichi1407 My brother works as a ‘self–employed’ driver for Hermes, which has the biggest market share of any courier in the UK after Royal Mail. On a busy day, he will deliver parcels to anywhere between 70 and 100 homes, being paid in the form of piece work, about £1 per parcel.

It goes without saying that virtually all of the items Hermes delivers from retail giants such as Amazon, ASOS and Sports Direct should be considered non-essential during the current lockdown conditions.

Of course, technically being their own employers, drivers have the freedom to choose whether to carry on coming into contact with up to a hundred potentially infected people each day; or whether to do without pay.

Out of the kindness of its heart, the Tory government has thrown self-employed workers the lifeline of being able to claim universal credit. If they do choose to stay safe at home and claim, the most optimistic estimate for a delivery driver receiving payment for March would be the end of April. More likely they would have to wait until June!

Faced with this ‘choice’, it is no surprise that hundreds of thousands of delivery drivers across the country are carrying on work as normal. This leaves them at very high risk of infection - and infecting others - given the nature of their work.

Two weeks ago, my brother started feeling something heavy in his chest. He described it as like having a chest infection, although he didn't have a persistent cough, so he thought nothing of it. He then developed a bad fever, which lasted five days.

He now assumes that he had covid-19. But because he is young and healthy, and despite showing quite serious symptoms, he was advised against going to a hospital or a medical centre to get tested. I asked him why he didn't go to one of the drive-through testing centres he had mentioned to me previously. He said he had checked: the closest one to him was 60 miles away...

After the fever subsided, my brother went back to work. According to medical advice he was likely to be still carrying the highly infectious virus. But he had no way of knowing for sure whether he had contracted it.

And more importantly, because he was "self–employed", he was not getting sick pay for the delivery days he missed, and had no way of claiming benefits for them. If he stayed in isolation for the recommended 14 days, he couldn't pay his rent and would probably have to skip meals.

I questioned whether it was safe to go back so soon, and asked him what measures the company was taking to protect him and his colleagues. He said they just tell them to wash their hands. He tried to leave packages by the door when he could.

What did his colleagues think of the situation? Well, what could they think? Everyone was just carrying hand sanitiser (bought at their own cost), having been advised by Hermes that washing your hands goes a long way to controlling a pandemic.

If this company's criminal – and life-threatening – negligence isn't a reason for delivery drivers to get organised, I don't know what is!