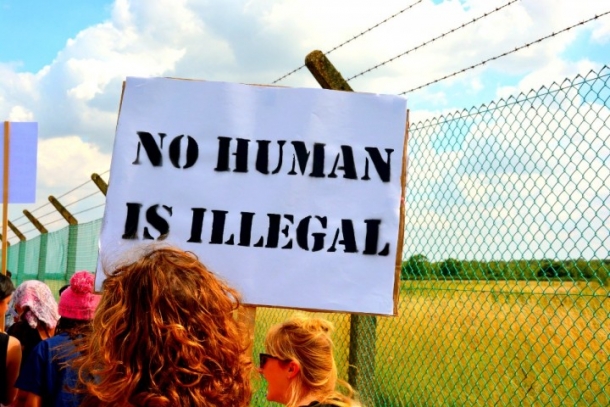 Xenophobia is perhaps the most consistent thread through British PM, Theresa May’s political career. Long before she became known as the Brexit prime minister – indeed, when she was still an ardent supporter of EU membership – she was the primary orchestrator of the Tory anti-migrant agenda. The Immigration Bill currently working its way through parliament will prove to be the crowning achievement of this divisive and cruel agenda.

May’s days at Number 10 may be numbered, but her racist policies will long outlive her career: after all, they are wholly consistent with the political logic of Toryism and with the capitalist system of which she is merely a craven representative.

The history of Tory attacks on migrant workers stretches back to Enoch Powell and beyond. But these attacks have been ramped up over recent years.

The now infamous “hostile environment” policy was designed on May’s watch as Home Secretary during the Tory-Lib Dem coalition. Its most substantial political legacy has been the Windrush scandal. The policy was ushered in by the Immigration Act of 2014, the callous thrust of which was summed up by May as “deport first, appeal later”.

Indeed, while many Remainers paint the Brexit referendum as the genesis moment for mainstreaming British racism, it was several years before Boris Johnson’s tour in the Brexit bus that vans instructing migrants to “go home” were driven around towns across London.

Having played such a key role in cultivating an atmosphere of precarity and hostility for migrants before the Brexit vote, May has escalated these conditions as Prime Minister. The new Immigration Bill, along with the separate but related rules set out in a government White Paper, pose the most pressing threats. These, respectively, bring an end to the free movement of people enshrined by EU law and institute a new set of UK-based laws on migration.

Taken for granted in much of the public discussion around Brexit has been the claim that the vote was motivated by a desire to end free movement and re-institute a mythic national ‘control’ over British borders.

Of course, such control was never really surrendered, as evidenced by David Cameron’s despicable refusal to take in more than 20,000 Syrians over five years; the continued presence of ramshackle migrant camps at Calais; the long-established punitive regime for migrants resident in Britain, involving numerous financial penalties, curtailments to workplace rights, and routine surveillance; and the role of the British state in regulating migration via Fortress Europe.

Nevertheless, the limited extension of freedoms for intra-European migration under the EU has been framed by the rabid right-wing press for many years as an abandonment of British sovereignty.

Ending free movement has therefore been the most uncontested element of the government’s Brexit position. Even Corbyn and the Labour Party have previously taken as a given that accepting the referendum result means passively accepting an end to the free movement of people. This purely negative measure is what is achieved by the Immigration Bill.

More controversial are the proposals put forward by the Tories for a new migration system. They claim that this new system is based on ‘skills’, and even that it places EU and non-EU migration on a fairer, more equal basis. Far from levelling the playing field, though, the new rules proposed by the government further entrench a hierarchy of class and income, race and nationality.

The most-prominent aspect of the proposed new policy is the institution of a threshold salary of £30,000 for new EU immigrants. Such a policy serves no interest other than a political one: to appease the prejudices of the Tories’ voter base about the presence of ‘foreigners’.

It also includes a substantial exemption for workers in essential services, such as teachers and care workers. It guarantees the democratic right of the wealthy to move where they please, while allowing only those workers most-needed by British capitalism to settle here. Far from placing European and non-European workers on a more equal footing, it prioritises migrants from ‘safe’ (developed, majority-white) nations over ‘unsafe’ migrants from underdeveloped, majority non-white countries.

The White Paper also outlines a nightmarish scenario for low-paid (‘unskilled’) migrants. These migrants form much of the workforce in the most casualised and precarious industries in Britain, and under the new rules, their existence would become even more unstable. They would have to suffer a very restrictive visa regime, which would limit their ability to resist attacks by employers. Ground between the millstones of economic precarity and uncertain political status, their oppression will only be deepened.

Finally, the proposals are likely to wreak havoc on the lives of thousands of EU citizens already in the UK. These people will be forced to apply for ‘settled status’ via an app, which will certainly prove impenetrable for many migrants. Initially, the government was intending to charge £65 for the privilege of submitting the application, although this fee has now been waived.

The government has also given itself the option to deny settled status to pensioners, unemployed, students and housewives – anyone who isn’t working on the day of Brexit. This prepares the way for another Windrush-like scandal of people being in the UK for decades suddenly being forced to leave or lose their social security.

In constructing ‘Fortress Britain’ to supplement ‘Fortress Europe’, the Tories are deploying a favourite tactic of bourgeois legal systems everywhere. Its magic is that it allows for the easy penetration of the rich, while ensnaring the poor in a demoralising, brutalising, bureaucratic trap. In other words, the harsh migration system will become an important battleground in a war between opposed classes.

In this fight, it is clearly the duty of every socialist and every working-class person to stand with migrants in defence of free movement – and for the extension of this freedom to all working-class people, European or otherwise.

It should be noted that, while the Tories have historically been the main party of racism and border controls in Britain, there is a long and shameful history of similar policies in the Labour Party. The Attlee and Wilson governments, for example, were imperialist and colonialist governments, deeply invested in cynical and racist migration policies. Any future socialist Labour government should break sharply from the legacy of those governments.

In contrast to their predecessors, the current Labour leadership’s good intentions are clear to see. Labour policy on this question has certainly been pushed to the left since the days of Miliband, with his notorious ‘Controls on Immigration’ mug.

On the day of the most recent mass anti-Brexit demonstration, Corbyn was attacked by many Remainers for absenting himself from the petit-bourgeois parade, instead paying a visit to Morecambe. The visit was part of Labour’s local election campaign. But it also allowed him to pay respects to the 20 Chinese workers who died in the Bay there 15 years ago while picking cockles. He used the opportunity to press a demand for more robust workers’ rights for migrants.

This clearly indicates a radical kernel in Corbyn’s position on this question, differentiating the Labour Party from the Tories – something that would not be happening if the Labour right wing were still in charge of the party. 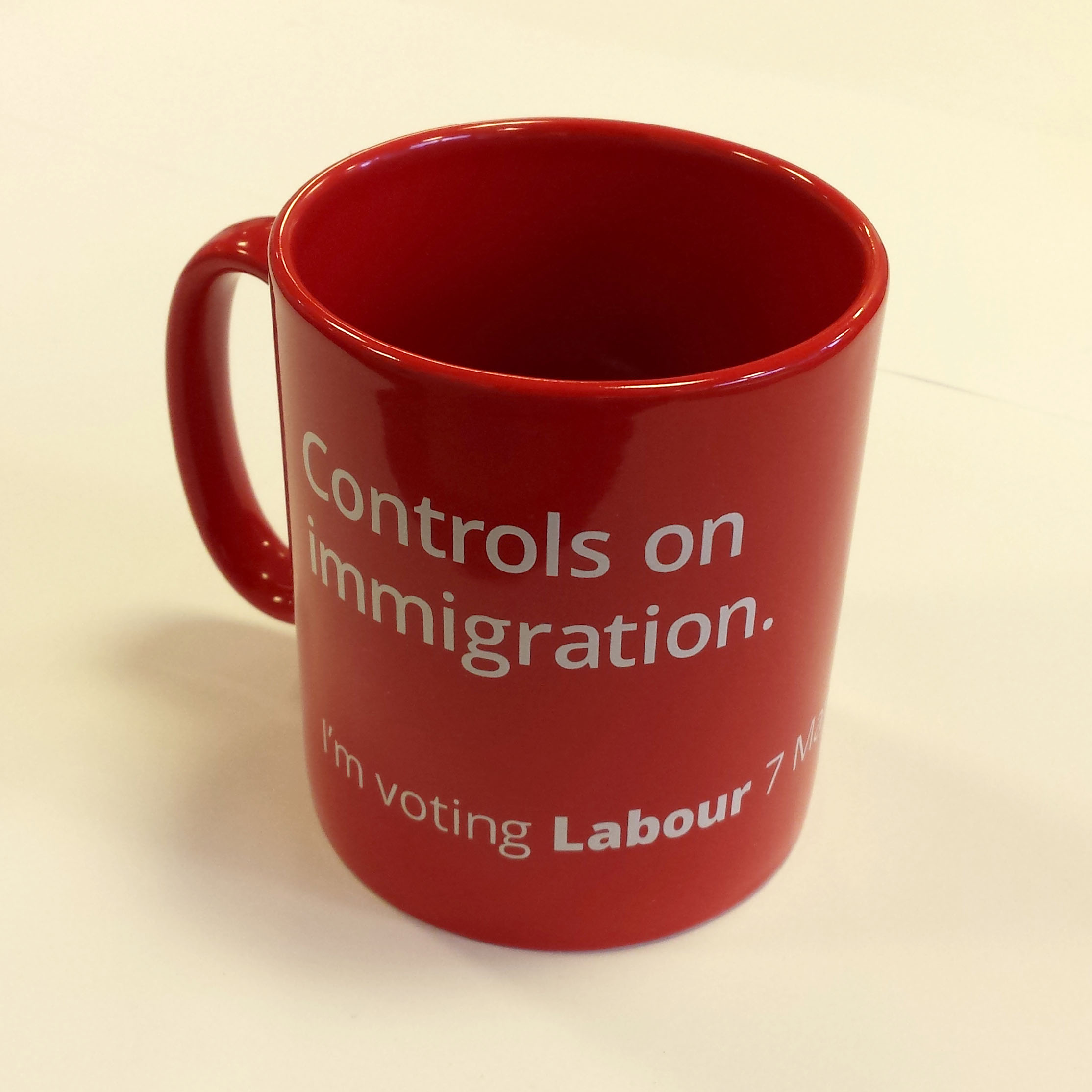 Labour policy on immigration has certainly been pushed to the left since the days of Miliband, summed up by this notorious mug / Image: Left Futures

At the same time, Corbyn and Shadow Home Secretary Diane Abbott have used numerous speeches to defend the right of migrants to live, study, and work in the UK on an equal basis with UK citizens. They have called for an end to the hostile environment. And they have outlined policies to prevent the use of migrant labour to undercut pay and conditions for all workers, for instance by introducing a visa system that ensures workers can move between jobs rather than being tied to a single employer.

However, Labour’s alternative has a lot of similarities to May’s proposal. It argues for ‘managed migration’, which has been Labour’s general catch-all phrase since the days of Blair. Rather than putting forward an internationalist position, it makes a nationalist demand that employers exercise preference for workers already resident in Britain, only hiring migrants once it is clear that no resident workers can take the job. How this can be determined or implemented is a mystery.

But this is fundamentally false. The declining wages are part of a global onslaught against the wages of workers. The only way to fight back is with a campaign of mass unionisation, which would only be hampered by making the position of migrants more precarious.

They also support the deportation of ‘illegal’ migrants by an expanded border force, and the regulation of migrants’ lives through the hiring of more police officers. Clearly, these measures will not merely target the instances of coerced trafficking but will sustain and even expand a repressive apparatus.

This pandering to backward layers enables pro-EU right-wingers like Blair to paint themselves as supporters of migrant rights, in spite of their long history of racist warmongering and xenophobic pandering.

Need for a socialist solution

Only a policy of socialist internationalism can tackle the root causes of mass displacements globally. This can only be done by ending imperialist wars and the super-exploitation of workers in poor countries, and by promoting a green agenda to offset the effects of climate change that will hit the world’s poorest hardest.

Capitalism means misery for the workers of the world. Only socialist measures can provide a way out. 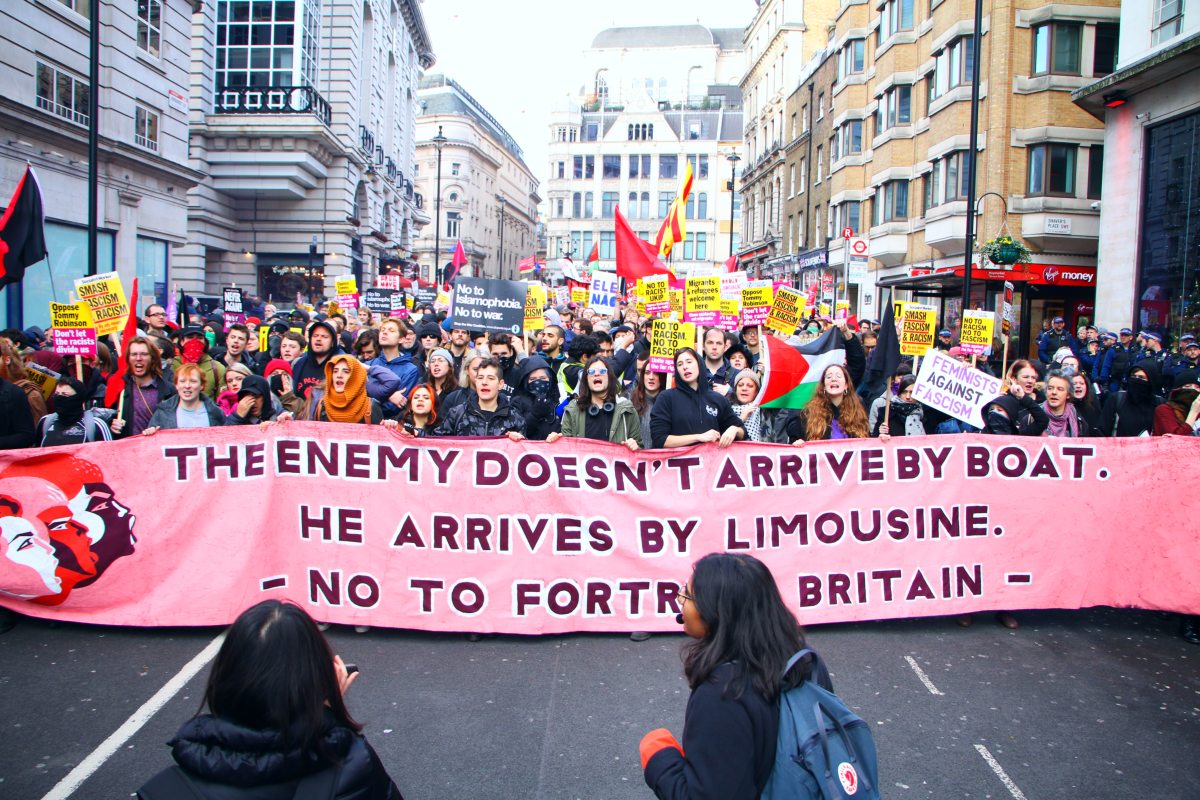 The great contribution of the Corbyn movement has been to place class politics back on the agenda in Britain after a long period of degeneration and decomposition in the labour movement. But as it stands, these politics remain inconsistent, and at times unprincipled.

It is essential that Labour puts forward a clear, internationalist position. As the Tories up the ante in their attacks on migrant workers, we must raise a set of clear socialist demands: