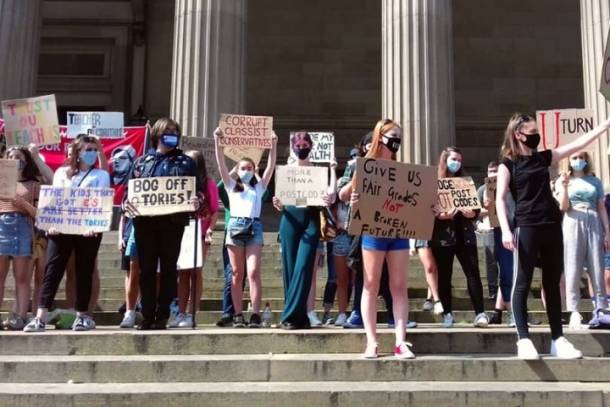 After a weekend of militant protests and online campaigning against the A-level results fiasco, the government has backed down, scrapping the infamous ‘algorithm grades’ for both A-Level and GCSE students. This represents a victory for young people. But their anger will not subside so easily.

In the immediate aftermath of the exams fiasco – which saw close to 40% of A-level grades in England downgraded from their teachers’ predictions – Tory education secretary Gavin Williamson dug his heels in.

Williamson’s immediate response was to defend the grading system as the “fairest possible way” to assess students. Later, on Saturday, he stubbornly declared that there would be “no U-turn” and “no change”.

But pressure from below has today resulted in a “screeching U-turn”. Now, many young people are demanding that the Education Secretary be sacked for the disruption and dismay he has caused. Hashtags like #DowngradeGavin have been trending on social media.

It was not given out of the kindness of anyone's heart. Militancy wins!

Backed into a corner

As students gathered in their thousands in a number of cities over the weekend, the cracks began to show in the ranks of the Conservative Party. Over 20 Tory MPs raised concerns about the grading system, and Tory MP Simon Hoare said that the situation was “beyond a joke” and “smacks of naive incompetence”.

Even members of Ofqual – England’s exams regulator – were denouncing their own algorithm! Sources from the exam ‘watchdog’ rightly pointed out that their grading system had led to a “hemorrhaging of public trust”. They urged Downing Street to follow Scotland’s lead and scrap the calculated grades altogether.

Boris Johnson responded to the situation in his typical fumbling manner. The Prime Minister declared that both Ofqual and Williamson had his full support – despite each being at loggerheads with the other!

Under fire from all sides, the government had no choice but to back down. This U-turn serves to show the immense power that young people have when they organise, take to the street, and make their voices heard.

The chair of Ofqual, Roger Taylor, even admitted as much in his grovelling apology on BBC News. “What changed was seeing young peoples' distress and anxiety” Taylor stated. “Seeing this we realised we had taken the wrong road.”

It should come as no surprise that the systematic downgrading of students led to unfathomable levels of anxiety and distress. But far from this cowering students, these anxieties about the future – and an already seething resentment towards the Tories – exploded into hardened struggle.

Despite protests being called at the last minute, thousands gathered outside of the Department of Education HQ in Whitehall over the weekend. Chants of “justice for the working class” and “fuck the system” filled the streets. Student networks coordinating protests have since mushroomed.

This display of anger shows that young people see straight through the claims that this was simply a ‘mistake’ or a problem with this or that grading system. The class nature of this latest injustice is plain for all to see. This debacle is the product of a deeply classist education system, which is set up to fail working-class youth.

this is @bencsmoke, Huck’s contributing editor, here in parliament square where students are gathering to demonstrate against the controversial a level results that many received last thursday which saw 40% of students marked down from their predicted grades. pic.twitter.com/MejILs333c

The education system ultimately reflects the needs of the capitalist system. Private schools simply would not exist if they did not confer an advantage onto those that come from more affluent backgrounds.

Similarly, those students that are set up to fail – year in year out – are what is required to keep the so-called ‘unskilled’ workforce in precarious, poorly-paid employment.

This reversal does nothing to address the deep-seated inequality in Britain's classrooms. Indeed, this Tory U-turn itself reveals the problems at the heart of the education system, as BTECs and other vocational qualifications are not included in the government’s latest decision.

We must demand that no student is left behind. The fact that the grading algorithm had to factor in attainment gaps between schools in the first place is a damning indictment of a broken system.

Looks like Johnson & Williamson have even ballsed-up their ‘screeching” U-turn:

“BTEC and other vocational quals not included in U-Turn. One grade drop at btec is equivalent to 2 a level grade drops in terms of ucas points. So many students still affected.” https://t.co/tTkDiJUHgD

The truth is that the class divide begins at birth – and widens with every hurdle that the working class faces in order to achieve the same opportunities as those born into wealth.

After years of cuts, severe underfunding, and ever-inflating classroom sizes in state schools, the Tories would be mistaken to think they can wash their hands clean with one rushed policy change and a hollow apology.

And let us not forget that Centre Assessed Grades are far from immune to the biases that were present in the algorithm grades. Teachers from state schools are often pressured into not predicting grades that are ‘too high’ for their students. As a result, classism will inevitably remain present, even with the grades that students will now receive.

There is still much to be done to uproot the class divide in our schools. Ultimately, under capitalism, working-class students will always be at a disadvantage.

But this scandal has opened many people’s eyes to the fact that meritocracy is a myth – that hard work is not enough to overcome the systemic inequalities facing the working class.

These latest events are another potent blow against this chaotic Tory government. And this, in turn, should give confidence to activists looking to fight back.

Young people – often a reliable barometer for the moods in society – have seen the power they possess by taking to the streets and demanding an end to injustice. This must now be a spark for a wider movement of workers and youth, against this rotten Tory government and their entire rigged system.

If this is what can be achieved with a weekend of hastily-arranged demonstrations, imagine what could be achieved if students joined up with the organised working class to create a mass fighting force.

We must continue the fightback against the ravaging cuts that have been carried out against our class. The first step must be to reach out to the teacher’s unions and labour movement at large. After all, teachers have already been on the frontline in the battle against Tory recklessness. And today’s students are tomorrow’s workers.

The measure of any decent society is the way it is able to nurture and prepare the next generation. A society that cannot offer young people a future is fundamentally flawed.

In the last instance, that is the lived and crushing experience of students and young workers today. With the recent NEU campaigning and UCU strike action as a backdrop, students are realising that organised, united, and militant struggle is our most powerful weapon.

The struggle for a free and fair education system – one that does away with classism and competition – is inextricably tied to the struggle for socialism. That is what the Marxist Student Federation is fighting for. Join us in the fightback!