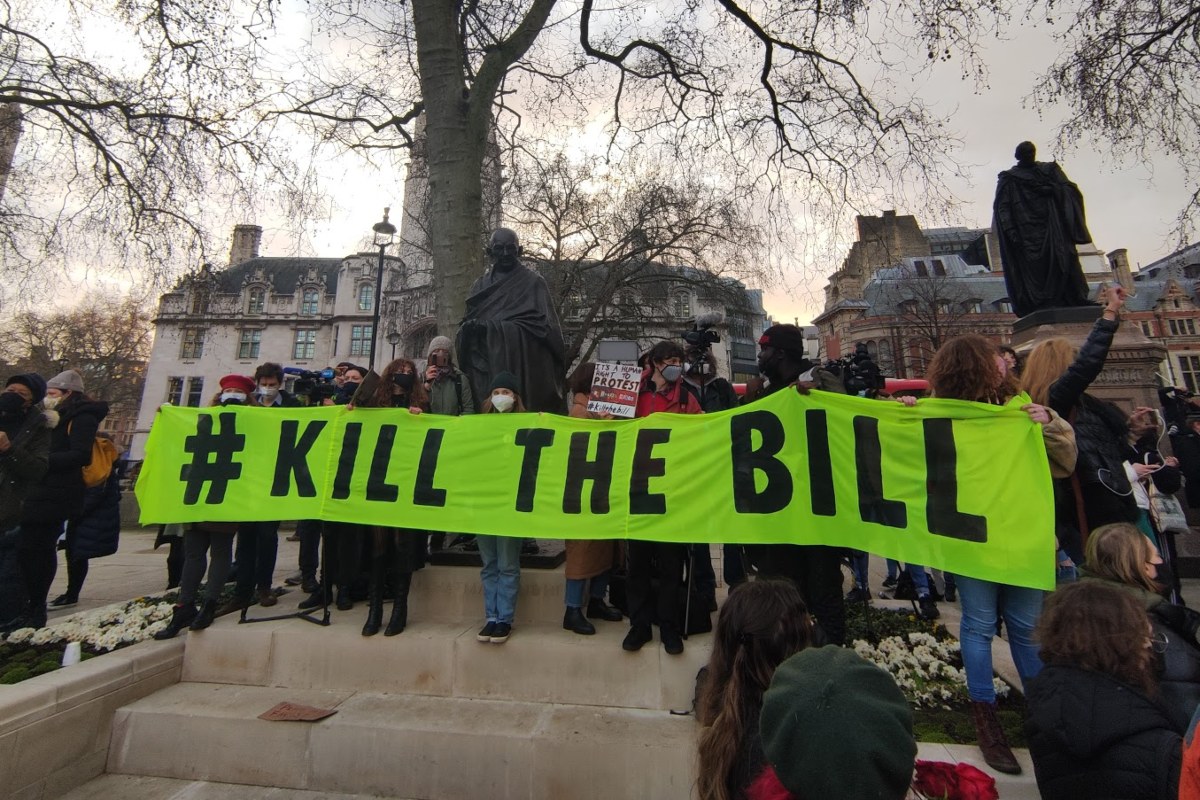 Scared by the recent rise of militant protests, the Tory government has pushed through new powers to clampdown on demos. But activists will not be quashed so easily. The labour movement must mobilise to smash through these repressive laws.

In the end, as a result of a huge backlash in recent days, the government’s victory was a far closer call than the Tories were initially expecting, with the bill scraping through with a majority of 96.

This is yet another reflection of the pressures weighing down on Boris Johnson’s government, which are causing the fractures and splits within the Tory Party to continue widening.

The bill came under fire in the wake of Saturday’s vigil on Clapham Common in London, where police brutally suppressed a peaceful demonstration in memory of Sarah Everard, whose alleged murderer is a serving Metropolitan police officer.

Mass protests against violence towards women, and against the police, have since erupted across the country in response. At these demonstrations, protesters’ chants of ‘kill the bill!’ have rung out in anger.

The proposed bill will give the police new powers to protect themselves and disperse protests; it will introduce tougher sentencing; and it will strengthen the court and tribunal system.

It will expand the arsenal of the police, allowing them to impose conditions such as “start and finish times and maximum noise levels on static protests” – previously applied only to marches. And where noise causes, or may cause, “serious annoyance or... inconvenience” to people or organisations, the police will be able to apply restrictions. 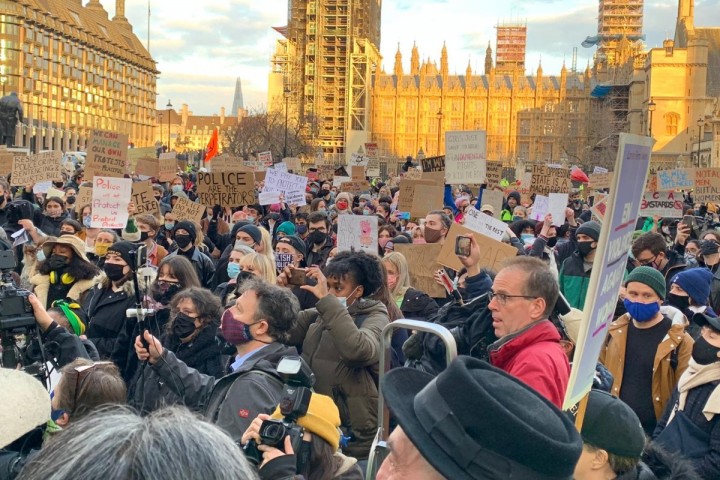 The Tory bill will give wide ranging powers to the police to repress protests / Image: Socialist Appeal

In fact, this legislation gives the Home Secretary, Priti Patel, the power to create laws – without parliamentary approval – to define what she (or her successors) believes constitutes a “serious disruption” to communities and organisations.

In other words, the bill reads as a carte blanche for the police and government to wield control over protests, whatever way they deem fit. Wherever you look in the legislation, it works to increase the power of the police, allowing them to define at whim what is and isn’t a lawful protest.

Those on the receiving end could face up to ten years in prison for exercising what the bill itself refers to as their “democratic right to protest”.

The number and militancy of protests in Britain has increased in recent years: from Extinction Rebellion (XR), whose activists have glued themselves to trains; to the Black Lives Matter protesters who toppled the statue of slave holder Edward Colston.

Similarly, recent protests in response to violence against women – and the system that is supposed to protect us – have the potential to take on equally radical dimensions.

The Home Secretary, however, has claimed that the protest on Saturday was “hijacked by anti-police extremists”, accused of being more concerned with destabilising society than women’s safety.

This is a blatant attempt by the establishment to portray protesters as being ‘disorderly’, so as to justify the police’s brutal response to Saturday’s peaceful vigil.

This shouldn’t surprise us. Priti Patel has made clear on more than one occasion that she is no friend to protesters: from branding XR activists as “eco-crusaders turned criminals”; to asserting that the Black Lives Matter protests were “dreadful”. And these assertions are simply a reflection of the reactionary views held by the whole ruling class.

But with this bill, the Tories aren’t attempting to curtail protests out of heartfelt concern for their impact on local communities or ordinary passersby. They are acting in the interests of the bosses, trying to repress the increasingly militant protests that are erupting onto our streets.

These protests are a response to the crisis of the very system the Tories serve and protect. In turn, they provide a visible point of opposition to this exploitative and oppressive system, giving confidence to other workers and youth to join the struggle.

That is why the ruling class and their representatives want to crush these protests. That is why the government has rushed through the introduction of this bill and its reactionary content. They are scared that in the future, it won’t just be statues that are toppled, but their whole rotten system.

MPs from all parties have faced mounting pressure since the horrific scenes at Saturday’s vigil. The backlash against the police’s response has been enormous, with further protests taking place across the country on Sunday, Monday, and Tuesday.

Even some Tory MPs have condemned the Met’s approach as “appalling”. Conservative MP Caroline Nokes said she was “truly shocked” by the police response. “In this country,” Nokes stated, “we police by consent, not by...dragging women to the ground.”

Labour leader ‘Sir’ Keir Starmer stated that he was “deeply disturbed” by events on Saturday. As a result, he announced that Labour would vote against the proposed bill.

Prior to Saturday, however, Starmer was declaring that he would whip MPs to abstain on very the same bill.

It is a scandal that Labour was considering abstaining in the first place. And yet, this entirely fits with Starmer’s continued attempts to outflank the Tories on the right – particularly over questions of policing and ‘security’ – and appeal to the establishment.

In the last six months alone, Starmer has had MPs abstain on not only the Overseas Operations Bill, but also on the infamous Spy Cops Bill  – which gives police spies immunity from crimes made against political activists, including rape and harassment.

Starmer’s quick U-turn is by no means indicative of a change of heart. Rather, this again is a result of the mass pressure from below.

The splits in the Tory Party over last night’s vote are equally indicative of this pressure. This demonstrates the utter instability of this Tory government – a government riddled with crisis.

While this repressive bill may have passed, recent events also show the way forward. Some commentators have suggested that those who oppose these new laws must look to the House of Lords to block them.

Instead of relying on this feudal relic, however, workers and youth must rely on their own strength. We need organisation and mass mobilisation to smash through these oppressive laws.

The lesson is clear. Militancy pays. Mass mobilisation on the streets could do more than just change the opinion of a few MPs; it could force the Tory government to back down entirely.

Such resistance cannot be left to individuals, however. Instead, the labour movement needs to organise against this new law, and against all other restrictions on protesting. This must include, in particular, the oppressive anti-trade union laws, which put direct limitations on the rights of workers to organise and strike.

In the final analysis, there is no force on earth that can stop the working class when it is organised and mobilised. In the face of any genuine mass movement, all these repressive laws would become mere words on paper. The state would be powerless and paralysed.

This new Tory bill must therefore be met head-on with class struggle.

Events over the past week have shone a spotlight on the tactics and institution of the police.

Under this new legislation, protesters could face ten years in prison for an act that causes damage to private property. Meanwhile, the sentence for horrific crimes such as rape can be as low as four years.

This hypocrisy raises the real question of who, or what, these laws and institutions are intended to protect.

While police were violently detaining women for simply placing flowers, the Winston Churchill statue in Parliament Square received police protection. This fact answers this question beyond any doubt.

The police not only protect their own before the public. The officer accused of Sarah’s murder, for example, was still working for the Met despite being reported for indecent exposure.

But, as an arm of the state, they function to protect the power and property of the capitalist class and their system; and to repress the working class and the oppressed.