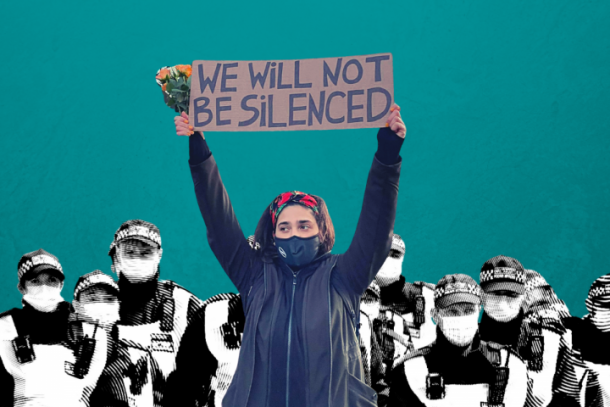 The horrifying rape and murder of 33-year-old Sarah Everard in March by a serving police officer caused a wave of rage and disgust across Britain. The killer’s trial and its aftermath have now unearthed a whole mountain of sexism and misogyny, affecting the police at every level. This was not a case of a single bad apple, as the Metropolitan police commissioner claimed: the entire institution is as rotten as the capitalist system it defends.

For many women, news over the last week has laid bare our worst fears. It has been uncovered that Wayne Couzens spent months planning the violent rape and murder of Sarah Everard – or, more precisley, any woman on the streets of Clapham that night.

Couzens has admitted that he used COVID protocols learnt in police training to carry out his attack. Those who saw the abduction thought they were seeing a legitimate arrest and walked on. Of course, we now know what happened subsequently: the vile and degrading killing of a young woman.

Rotten to the core

This information has, once again, raised concerns about the role of the police.

Couzens was an acting police officer. And for all the posturing of the Metropolitan Police, it was not hard to see this coming. He was nicknamed ‘the rapist’ by his colleagues, and had three previous accusations of indecent exposure against him – two of which were made only a month before Sarah Everard’s murder. 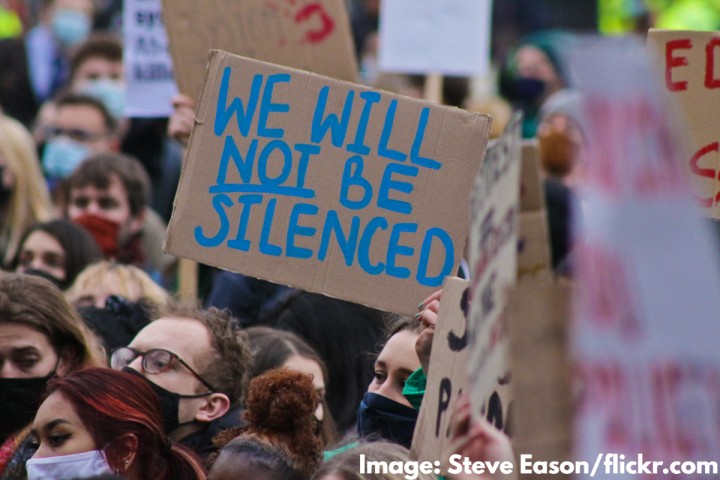 Tory policing minister Kit Malthouse stated that “there is a job to be done to rebuild trust by the police”. But upon what basis can this trust be rebuilt?

From the disgusting scandal of Spy Cops having relationships with female activists; to the hundreds of sexual abuse claims made against police officers in recent years; to the statistic that at least 15 serving or former police officers have killed women in the UK since 2009: there is no reason why women should have any trust in the police.

Even the vigil in memory of Sarah Everard resulted in young women being violently pinned to the ground by police officers.

Wayne Couzens’ name and face may be the one splashed over frontpages in the press, but recent revelations have made it clear that this is not simply a case of a single bad apple. Rather, the whole institution of the police is rotten to the core.

Highlighting this fact is the recent testimony of Sue Fish, a female police officer, who has revealed some of the deplorable attitudes and actions of her colleagues regarding sexual assault.

In her mid-20s, the Times reported, Fish was left in the car by a commanding officer while he went to have sex with a woman he had come across whilst on duty. Of course, the power imbalance of an on-duty cop and a vulnerable woman does not leave much romance in this situation. 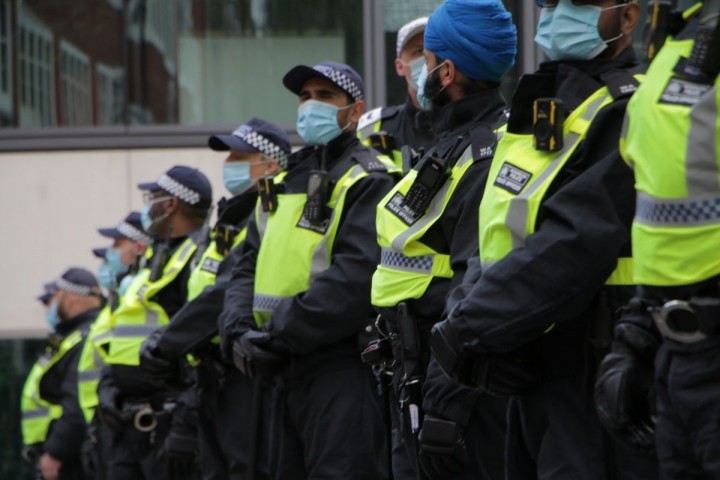 This was not a case of a single bad apple: the entire police institution is as rotten as the capitalist system it defends / Image: Socialist Appeal

According to Fish, “sex on duty was seen as a perk of the job” – a claim that is given much credence by the sordid case of Mark Kennedy.

Kennedy, a police officer put in charge of infiltrating a political group, has recently been in court regarding a relationship he had with a woman under false pretences.

The judge in the trial has admitted that senior officers were aware of this relationship and turned a blind eye.

This – alongside many other similar examples and instances, including the fact that Couzens was not suspended from the force despite the allegations against him – points to an endemic problem of sexism and misogyny within the police.

Home secretary Priti Patel has come out saying that she is heartened to see a ‘monster’ taken off the streets, now that Couzens has been sentenced to life in prison.

The problem, however, is not of one monster who slipped through the cracks, but a fundamental flaw that runs deep throughout the police force. 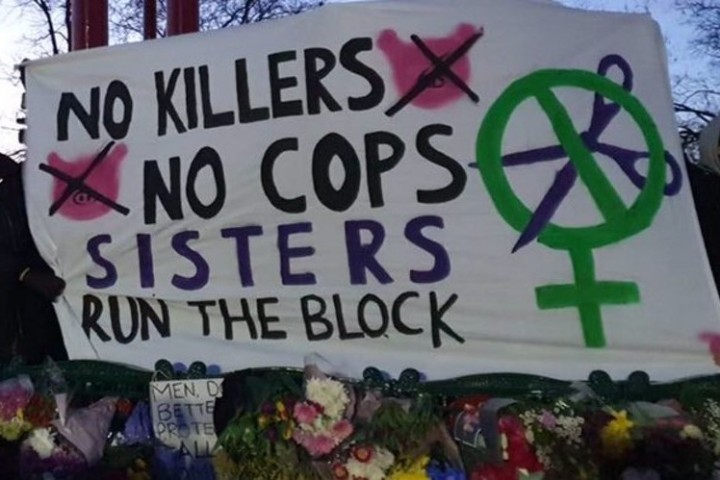 Establishment politicians have recommended women call the police when they feel they are in danger. But when the police themselves are the problem, how can speaking to another officer provide any assurances? / Image: Socialist Appeal

Even Lord Paddick, Liberal Democrat peer and ex-deputy assistant commissioner in the Met Police, says that there is ‘widespread sexism’ amongst the police.

Every woman who has tried to tell the police about their sexual abuse, only to be met with condescension, victim blaming, and a wholesale lack of support would likely agree with this statement.

In any case, responsibility for the existence of such ‘monsters’ – within the police and wider society – lies with the ruling class, who create the breeding ground in which such creatures are able to grow and thrive.

Police officers are deliberately fed a diet of regressive and reactionary politics by the ruling class and their media mouthpieces, in order to maintain them as loyal defenders of the capitalist status quo. As part of this, they are pumped up with self-importance; given a sense of impunity; and encouraged to feel that they are above the law.

We must remember that Priti Patel, in the wake of the brutal suppression of peaceful attendees of Sarah Everard’s vigil, tried to hand more power to the police.

How many ‘monsters’, in other words, have been created by this Tory government, which has given police officers the green light when it comes to repression and violence?

‘Sir’ Keir Starmer, who has constantly pandered to the ruling class and the right-wing press with his ‘tough’ stance towards crime and his rhetoric about ‘law and order’, has also said nothing of any use on this issue.

In his speech at the party’s recent annual conference, for example, to address concerns about safety, Starmer promised that Labour would put more police on the street. That’s right – to stop the police murdering women, Starmer suggests increasing police numbers. There is a very clear hole in this logic.

Many other establishment politicians – and the police themselves – have said that women should call the police to avoid being killed by the police.

Similarly, Scotland Yard officials have suggested that women should wave down a bus in this situation. And the police have issued guidance that if you are unsure about an arrest, you should ask to speak to an operator on the radio.

Given the absolute incompetence of senior officers in dealing with previous problems, why should women feel safe talking to another police officer? When the police are showing themselves to be the problem, how does speaking to another officer provide any assurance that you are safe?

No safety under capitalism

Liberal commentators are now calling for yet another inquiry into the police; for a so-called “Stephen Lawrence moment” to “restore faith in the police”.

Others are demanding the resignation of Met chief Cressida Dick. (Although notably not Priti Patel or Keir Starmer, who – along with the rest of the establishment – have closed ranks to defend the police and its top representatives.) 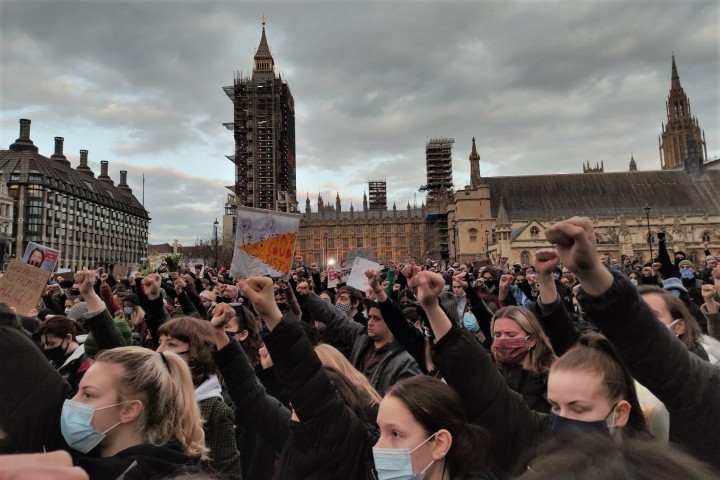 Only by overthrowing capitalism and transforming society along socialist lines can we genuinely make our communities safe / Image: Socialist Appeal

But despite drawing conclusions of ‘institutional racism’, the Macpherson report about police failings surrounding the murder of Stephen Lawrence did nothing to eradicate structural racism within the police. Indeed, racist policing practices have actually become more prevalent in the decades since.

Similarly, replacing Dick with another face at the top of the Met will do nothing to bring about real change. Nor will hiring more female police officers – as suggested by notorious sexist Boris Johnson – help to eliminate the deep-rooted culture of sexism and misogyny within the force.

Couzens is not an isolated monster, but a terrifying example of a threat that exists through the police and the entire apparatus of the capitalist state.

Ultimately, the police are not here to protect us, but to protect the property, profits, and power of the capitalist class; that is, to defend the capitalist system – a system that relies upon sexism, racism, oppression, and violence to divide and exploit the working class.

The institution of the police cannot be reformed or rehabilitated. More officers on the streets is no solution. We cannot be kept safe by the very people whose role it is to repress and attack us.

We need to abolish this entire rotten system. Only by overthrowing capitalism and transforming society along socialist lines can we genuinely make our communities safe, and truly liberate women from the scourge of violence, sexism, and oppression.