The leaders of the world’s 20 richest nations are visiting Toronto in June, and they want your money. They want your job, your home, your education, your health care, your public transport, your social services, your pension, and your paycheque. They want to take anything that makes life even halfway bearable. They want all of these things to pay for the mess that they, and their capitalist buddies, created. But, we are not just going to sit and let them. 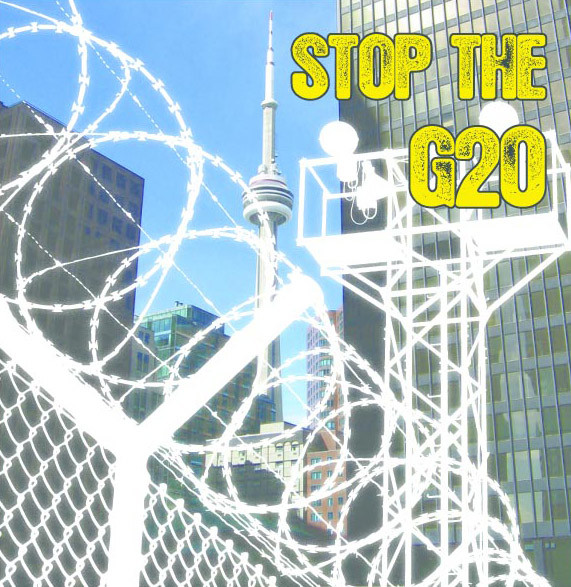 A year and a half ago, capitalism entered into its greatest crisis since the Great Depression. This happened after decades upon decades of corporate propaganda telling us that capitalism was the only possible economic system. They told us that booms and slumps were a thing of the past and they could never happen again. The crisis proved them all wrong; capitalism failed spectacularly and they only got out of the crisis by pouring trillions of dollars of deficit financing into the system.

Before we focus on the repercussions of their deficit financing, we should remind ourselves of the reasons for the economic crash. The crash was no accident; sub-prime mortgages, derivatives, and stock market swindling were not the causes for the crisis; they were merely the worst excesses of an already sick system. The root cause goes back to what Karl Marx predicted over 150 years ago—the crisis of overproduction. Overproduction is hard-wired into capitalism and it cannot be reformed out of capitalism. The crash, as well as the attacks on workers that the G20 are promoting, are inevitable products of the system and they will not go away until we send the system to its grave. For those wanting a more in-depth analysis of the crisis, we suggest reading the IMT Manifesto or Fightback’s Canadian Perspectives 2009 .

In a recent report, the International Monetary Fund (IMF) details how the manner in which the capitalists got out of the crisis is now the cause of the next biggest problem. It is ironic as this was also predicted in the Communist Manifesto: “And how does the bourgeoisie get over these crises? … by paving the way for more extensive and more destructive crises, and by diminishing the means whereby crises are prevented.” The IMF points out that governments have added, on average, a debt load of 20% of GDP and are projected to add another 20% by 2015. They point to Greece as an example of what happens when debt becomes too large; however, Spain, Portugal, Ireland, and even Italy and Britain are in a similar situation. The USA is projected to soon pass the 100% debt-to-GDP ratio, where the cost of paying interest starts cutting into typical expenditures. Japan has a debt-to-GDP ratio of over 200%!

What is the IMF’s advice to the G20? Massive cuts in expenditures to the tune of 8.7% of GDP. Canadian Prime Minister Stephen Harper has echoed these sentiments and called for the governments of the G20 to institute cuts themselves, or be forced to by the market, like in the case of Greece. In Greece, they have attacked pensions, laid off thousands, raised the sales tax, and made workers pay for the bosses’ crisis. The G20 plan to impose the same draconian cuts enforced on the Greek people onto the shoulders of all workers in every country.

However, the G20 leaders are highly concerned by the possible political reaction against their cuts. These attacks on working people will be highly educational in showing the mass of the population the true nature of capitalism. We have already seen the response of the Greek workers with a series of general strikes. The fact that they fear the people is shown by the undemocratic security response for the Toronto G20 summit.

Toronto is being turned into an armed camp for the duration of the G20 summit. The police are being vague about their plans but it appears that the downtown core (pretty much anything south of Queen Street) will face increased security, surveillance, and fences. In direct violation of our civil liberties, they will likely curtail people’s democratic right to protest in this area. Instead, they have assigned “official protest zones” where people can be safely ignored. If the G20 leaders are going to enact policies that negatively affect the people of the world, they should at least do it face-to-face with those concerned!

Closing down the city centre is a direct affront to the people of Toronto and will cost the already underfunded city, small businesses, and workers millions of dollars without compensation. Thousands live in the security zone and there are even children’s daycares in the zone. The police have had no answer to the question of what happens to the population if they let off teargas against protesters. In a sign that they are pre-emptively planning to limit free dissent, they have rented an old movie studio in the Port Lands to act as a temporary jail. They may decide to use “anti-terror” laws to declare parts of the city civil-liberty-free zones and conduct mass arrests. This is what capitalism means—the G20 plans to steal from the poor to give to the rich, and when the majority of the people try to prevent the theft they face armed goons protecting the minority. We say that if they can’t meet without provoking the wrath of the population, they should change their policies rather than limit dissent.

Stephen Harper tried to deflect attention away from all the austerity by supposedly championing a G20 program of maternal health in Third World countries. All he needed to do was feed apple pie to orphans and he would have all the clichés covered. However, even this has blown up in his face. In a nod to the religious right in the Conservative Party, his plan specifically excludes funding abortion, something that practically all experts recognize is a vital component part of comprehensive maternal health. The majority of the Canadian population opposes this restriction and so even this small sweetener has turned into a bitter pill.

The European nations are supposedly championing a bank tax, or Tobin tax, on financial transactions, to create a reserve fund to cover future bailouts. The Canadian government is fighting tooth-and-nail against this measure, saying that it is unfair to Canadian banks that did not need bailouts. Harper is bending the truth here as the Canadian government bought out $75-billion of risky mortgages from Canadian banks. It is possible that the soft-Left will champion this bank tax as a so-called solution, but in reality, it is a dead-end. Firstly, none of the bank-tax money will go to pay down the debt accrued for this crisis—the G20 leaders all agree on the important principle that the poor must pay for the failures of the rich. Secondly, any tax on the banks will almost certainly by passed on directly to us, the consumers. Thirdly, this fund is to be used to mitigate future crises! In other words, they are admitting that capitalism is a failed system and future crises, along with mass unemployment, attacks on the social wage, etc., are inevitable. Capitalism is like a rusty old car that barely works and costs more in repairs than it is actually worth. The bank tax is the equivalent of saving up for part of the repairs. Doesn’t it make far more sense to send the capitalist clunker to the metaphorical scrap yard, and replace it with a new socialist economic system that won’t break down?

It is important that as many people as possible come out to protest the G20. The Ontario Federation of Labour (OFL) and the Canadian Labour Congress are organizing a mass rally at Queen’s Park on 26th June and it is estimated that over 20,000 will attend. OFL President Sid Ryan correctly recognized the problem at hand when he said:

“This is a once-in-a-lifetime opportunity for Toronto residents to express their sentiments and it is vitally important they do so, given the desperate circumstances that millions of people are facing.

“Corruption and wreckage of the world economy is creating misery for global citizens; meanwhile financial institutions and big banks are being bailed out by their political friends; wages are pitiful; public services are disappearing; good jobs are becoming more and more difficult to find. In Canada alone, we’ve lost more than 500,000 manufacturing jobs and we’re not at the end yet.”

It is good that the leaders of the workers’ organizations recognize the problem, but what is vital is that they also start offering solutions. In Greece there have been a series of general strikes as workers say that they won’t pay for the bosses crisis. The G20 are preparing similar austerity measures and the unions and left parties internationally must start preparing a similar response. We also cannot just be against the G20; we must be for a real alternative. It is amazing that the first thing the corporate mouthpieces did after the crash was to open up a new ideological offensive against socialism. They said socialism was dead; they’ve been saying that for 150 years. If socialism is so dead, why bother attacking it? The capitalists themselves understand that socialism is dangerous because it is the only alternative to their system. As well as fighting against the austerity of the G20, we need to begin a fight within every union, every left party, every student and youth organization, to adopt a socialist platform that can eradicate capitalism. Fightback is working to make this a reality. There is no power on earth more powerful than the workers and youth when they know what they are fighting for. Join our fight for a socialist world.