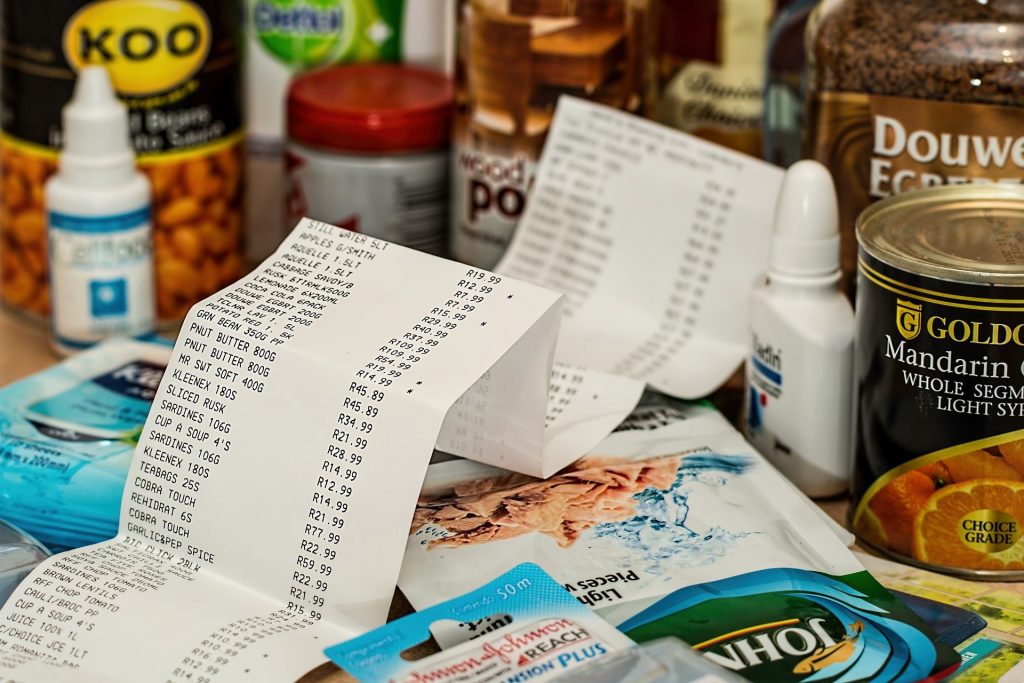 The first weeks of the new year have already had their fair share of bleak news. As if the Omicron surge was not enough, working Canadian families can now look forward to a surging grocery bill. Food prices are set to increase between six and eight per cent this year, according to a new report from Dalhousie University.

The average family of four will pay almost $1,000 more for groceries than they did in 2021, which itself was already a record year for food price increases. Meanwhile, grocery store executives are posting record profits and awarding themselves million-dollar bonuses. This is the true nature of the capitalist system: a carnival for the rich and chaos for the poor, or as Lenin aptly described it more than a century ago, “horror without end”.

The rising cost of food is not a new story. Grocery bills have been rising for decades in Canada. According to the Dalhousie report, between 2000 and 2020, a typical grocery bill rose by 70 per cent, for an average of 3.5 per cent per year—well above the average rate of inflation—while wages stagnated. But with the onset of the pandemic, these tendencies have been dramatically accelerated. The price of food rose 4.7 per cent in 2021, and if the predictions in the Dalhousie report are correct, the new year will see a rise of almost double what was seen in 2021.

The contradiction between rising prices and stagnant wages has been the source of endless poverty and misery for millions of Canadians since well before the pandemic began. In 2017, 4.4 million people lived in food-insecure households across the country. The rapid rise in prices will only make things worse. Millions more will be pushed below the poverty line. Those who were already there will be forced to make the choice between a decent meal or a roof over their head.

Already there has been a surge in food bank use across the country. Canadians made 1.3 million visits to food banks in March 2021, a more than 20 per cent increase over the same month in 2019. Toronto food banks alone recorded a staggering increase of 47 per cent between April 2020 and April 2021, marking the first time in the history of the city that new food bank users outnumber existing users. Neil Hetherington, the CEO of Daily Bread Food Bank, said that food banks were in crisis even before the pandemic. The continuous rise in food prices will put increasing strain on already limited resources.

Still more will be pushed completely over the edge. Food prices on Indigenous reserves and in the territories have been astronomical for years. In Nunavut, more than one in two people cannot get enough to eat. Such food insecurity has been identified as a key factor behind the high rate of suicides among Indigenous youth.

If you ask a bourgeois economist why food prices are rising, you will hear a familiar story: supply and demand have been thrown out of balance as a result of the pandemic.

On the one hand, lockdowns and other measures meant to curb the spread of the pandemic restricted production and slowed distribution. The reduction in supply caused the prices of commodities necessary for the food production process, like feed, energy and fertilizer, to increase. This also affected the price of gasoline, which has run-on effects on the cost of shipping food. 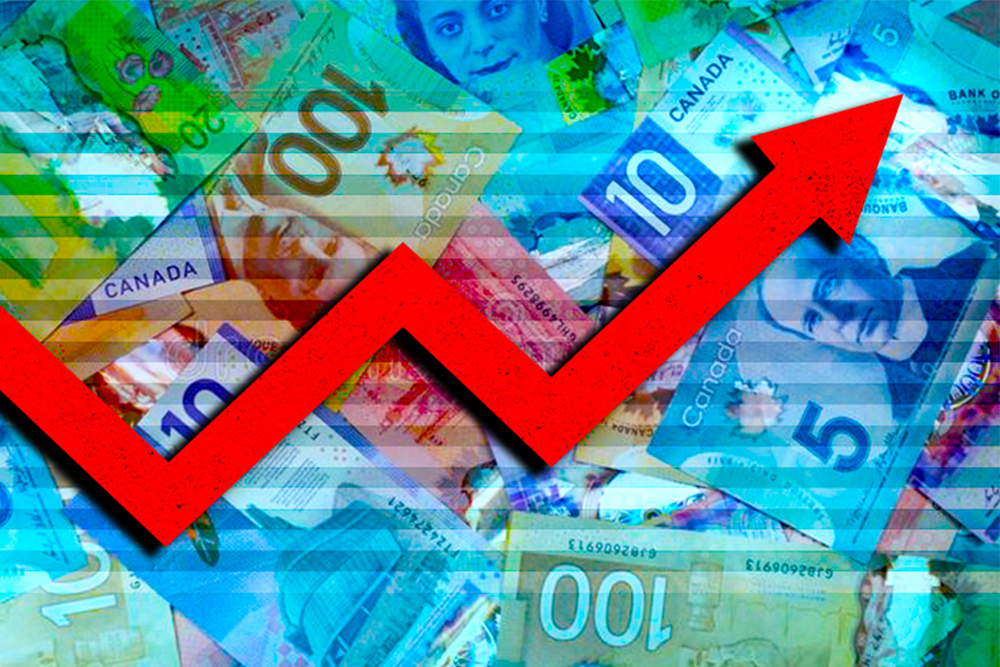 While rising inflation has hit all sectors of the economy, essential goods like food, shelter and transportation have seen the sharpest increase in prices / Image: Fightback

On the other hand, as pandemic restrictions eased in the latter half of 2021, a spending boom was unleashed as the wealthier sections of society looked to spend their pandemic savings, putting further strain on restricted production.

Though these are the fundamental causes, says our bourgeois economist, to these problems must be added a myriad of additional factors—from the impact of extreme weather events causing low crop yields, to a shortage of labour in the Canadian food service industry, to big corporations hoarding supplies and shipping capacity in hopes of meeting future demand. There is even an ongoing feud between food suppliers and grocery store chains, the latter of which are looking to maximize profits by imposing draconian shelving fees on their suppliers. Inevitably the results of this parasitism will be passed on to consumers.

All of this has combined to create a situation of chaos in the economy, not just in Canada, but around the world. Supply chains, which were already fragile before the pandemic, have been shattered, affecting every country and every industry. Bottlenecks and shortages are appearing in all corners of the globe. October and November of last year saw mass congestion of cargo ships at the Port of Vancouver (and this was before the catastrophic flooding that occurred in late November). Truck shortages are preventing food from being delivered to stores, leading to grocery store shelves sitting empty. This chaos creates a vicious circle which drives prices even higher.

Nevertheless, our bourgeois economist is not worried. After all, most of these problems are mere hangover symptoms that inevitably follow the long night of the pandemic. All the working class needs to do is sit tight, bear the pain, wait for supply and demand to come back into balance, and eventually everything will sort itself out.

However, there is one factor that our economist is remiss to mention.

At the beginning of the pandemic, faced with the prospect of a catastrophic financial and political crisis, the Canadian ruling class embarked on an historic program of so-called “quantitative easing” (QE). QE is a fancy name for printing money, and was used to inject $5 billion of currency into the Canadian economy every week for most of 2020 and 2021.

The stated aim of this program was to keep Canadian workers (and thereby the economy as a whole) afloat during lockdown. Yet by some mysterious force, the overwhelming majority of this money ended up being gifted to failing corporations in the form of bailouts! Companies like Air Canada and Leon’s were handsomely rewarded from the government’s $700-billion bailout fund. Instead of investing in production or paying adequate wages, they laid off their workers and used the money to speculate on stocks and the housing market.

Will printing billions of dollars in new currency have an impact on prices? On this thorny problem our economist prefers to stay silent. In fact, former Bank of Canada governor Stephen Poloz flatly refused to acknowledge its existence, saying that government stimulus has nothing to do with inflation. We regret to inform Mr. Poloz that the laws of economics can’t simply be willed away by wishful thinking. No matter how hard one might hope for it not to be so, it is a fact that an increase in the money supply will eventually be followed by a corresponding increase in the price of every other commodity.

We understand this fact must be rather embarrassing for our economist. After all, if word got around that working class people were living in increasing misery because the central bank printed billions of dollars to give handouts to their rich friends, it might cause something of a scandal.

Meanwhile, the food profiteers live like modern Marie Antoinettes. Grocery stores made record profits in 2021, while the CEO of Sobeys awarded himself a “hero pay” bonus of $2.71 million for his hard work, almost twice what he paid himself the year before. These very same bosses, with no sense of irony, love to repeat the old myth that inflation is caused by wage increases. This begs the question: if wage increases cause prices to go up, why do the enormous bonuses executives regularly award themselves have nothing to do with it?

The cost of food is rising, and so are we

Crisis upon crisis are piling on top of one another. Capitalism has created a situation which has become intolerable. The price of food is just the tip of the iceberg. We cannot afford to live one more day in abject misery while our living standards are eroded.

We say: workers must have a living wage! The labour movement must demand that the minimum wage be pegged at two-thirds of the average wage. To combat rising prices, annual cost-of-living increases should be determined by a committee made up of elected representatives from the workers, trade unions and the unemployed. 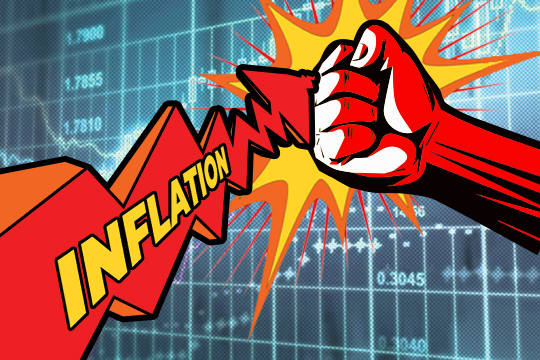 The movement of the Kazakhstani workers, which ought to be an inspiration for workers everywhere, shows both the true nature of the crisis and the means by which it can be ended / Image: Fightback

The cost of food has been a key driving force of historic class struggles. The initial spark of the Great French Revolution, which forced the masses into the streets in an heroic struggle against the ancien régime, was a shortage of bread. It has been said that when the courageous revolutionaries stormed the Bastille in 1789, they came for bread first and arms second.

In modern times, workers need to look no further than the magnificent ongoing popular movement in Kazakhstan, which began as a protest against rising fuel prices, but developed into a mass uprising that forced the government to resign in a matter of days. The movement of the Kazakhstani workers, which ought to be an inspiration for workers everywhere, shows both the true nature of the crisis and the means by which it can be ended.

Ultimately the food price crisis is a crisis of capitalism. The anarchy of the market and the rapacious greed that it engenders are both the causes of the crisis and the main impediments to its solution. Tinkering here and there around the edges of the system cannot solve the problem. The task of the working class and its leadership is to sweep aside this rotten system once and for all. But once this task is complete, the road will be open to a socialist future of unparalleled prosperity and abundance.

Originally published on 14 January at marxist.ca |