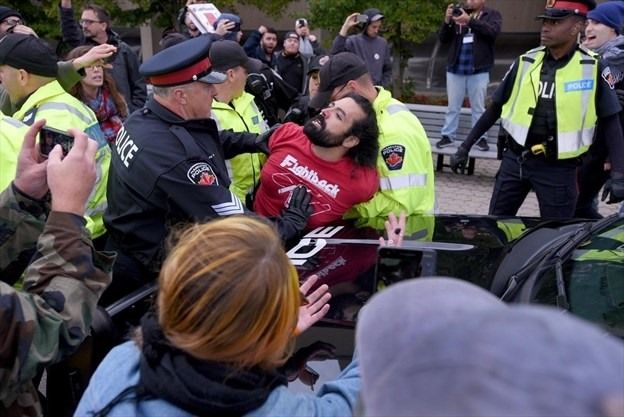 On the morning of Tuesday, 22 October, Max, a comrade of Fightback (the IMT in Canada) was arrested by plainclothes police officers in front of his home in Hamilton. His family was made to watch as Max was placed in handcuffs and forced into the police cruiser.

Max was held in police custody for almost 10 hours. In that time, he was held in a police cell and subjected to interrogation. Max was eventually informed he was being charged with intimidation and assault in relation to his participation in an anti-Bernier protest held in late September. Max was protesting the same individuals who sent a barrage of hate mail that forced a restaurant run by Syrian refugees in Toronto to be temporarily shut down. Fightback Hamilton released a statement and video at the time of the anti-Bernier protest, which clearly shows that Max is not guilty of these charges. You can read that statement here: https://www.facebook.com/fightbackhamilton/posts/916429702045688

Fightback resolutely condemns the charges being laid against Max, which have absolutely no basis in fact and we appeal for solidarity from the left and the labour movement.

We have since learned that three other left activists were also arrested and charged by Hamilton police. More arrests and charges may soon follow. We believe this is a politically motivated attack. While several left-wing activists have been charged, no charges were laid against members of the far right, despite video evidence of them attacking activists at the protest. This follows a long history of the Hamilton police persecuting the left, while turning a blind eye to the violent actions of the far-right, as was the case at Hamilton Pride this year.

This is also taking place just months after Hamilton city council and Mayor Fred Eisenberger proposed a disgusting anti-democratic anti-protest bylaw under the false flag of stopping hate. The proposed bylaw is so prohibitive (banning the use of banners and sound amplifying equipment, distribution of flyers, and all “disruptive” activities) that it is effectively bans all forms of political protest and political organising. It isn’t difficult to see that this would be disproportionately applied to the left.

That charges are now being laid against Max, a well-known figure in the labour and anti-racist movement, is therefore not a coincidence. They are attempting to set an example and intimidate the left and the broader labour movement to discourage us from organising. As such, these charges must be opposed by the labour movement, left organisations, and the broader community. The targeted persecution of activists today will be repeated against other activists in the future, and we cannot let this happen unopposed.

To support Max, we encourage you to send letters to the following, and CC Fightback at Fightback@marxist.ca:

Please feel free to use the following model letter:

To whom it may concern,

I have sent you this email to state my opposition to unjust charges that were recently laid against Maximiliano Herrera and three others in relation to an anti-hate protest held on Sept. 29 at Mohawk College.

These charges are baseless. I also find it disturbing that no charges have been laid against any far right agitators present on Sept. 29, despite there being video evidence of them engaging in violent acts. This suggests that Hamilton police are deliberately targeting left wing activists, while turning a blind eye to violent hatemongers. This is an insult to justice, and a stain on the city of Hamilton.

I and many others demand that all charges being laid against these four individuals be immediately dropped, along with the systematic intimidation of left wing activists in Hamilton.

I look forward to your response.

As well, the costs of Max’s legal defence will likely be quite significant so we are asking people in the movement to contribute to a GoFundMe created to help Max and his family cover the legal fees: https://www.gofundme.com/f/legal-defense-fund-for-max