The Quebec election this past Monday marked the end of an era. Support for the establishment parties, the PQ and the Liberals, collapsed to its lowest point on record. The main benefactor is the right-wing CAQ, which swept a dozens ridings and will now form a majority government. But the vote was also polarised to the left, with Quebec solidaire more than doubling their vote share and going from three seats to 10. This unprecedented situation opens up a new period of class struggle against the CAQ government.

This election follows in the general trend of political polarisation to the left and to the right seen all over the world. The anger and frustration of the workers against the parties who have governed through years of austerity and corruption has made its mark. The combined vote for the PQ and the Liberals collapsed to just under 42 percent as they lost more than 1.1m votes. The PQ was smashed and the Liberals were reduced to their lowest result since Confederation in 1867. The desire for change was palpable well before the election began and this result should surprise no one.

The CAQ, which was founded just seven years ago, became the main vehicle through which this anger was expressed as the party increased its share of the vote from 23 per cent to 37 percent. Quebec solidaire, formerly a relatively marginal party, more than doubled its vote share to over 16 per cent and is now a significant force in Quebec politics. This rise in support catapulted the party past the Parti Quebecois in terms of seats, from fourth place into third, for the first time since the party was founded 12 years ago.

PQ on the road to destruction

The biggest loser of the election was the Parti Quebecois. The historic mass nationalist party of René Lévesque, which led the two referendums on sovereignty has been absolutely devastated, winning just nine seats and only 17 percent of the vote. But the writing was on the wall long before this election and was clear for all to see. With the economic crisis bearing down and class struggle back on the agenda, the PQ was plagued with internal crises and splits for the last several years. 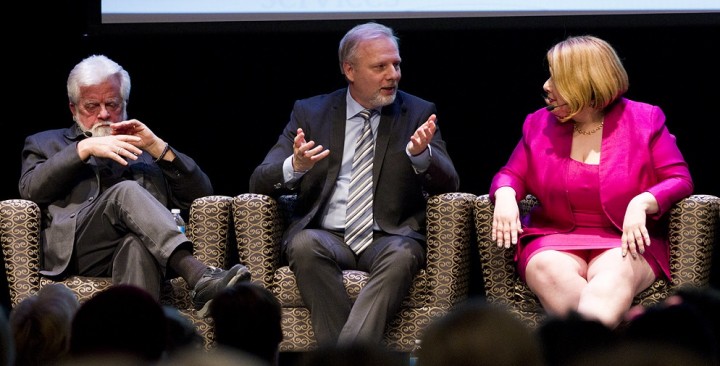 Jean-François Lisée panicked and launched a series of hysterical attacks against QS. This tactic backfired and only cemented the party’s demise / Image: Flickr, Eva Blue

The party, which had historically united different classes together in one national struggle for a new country, has been increasingly torn apart over the years. Workers and unions moving to the left have ditched the party, while more openly bourgeois figures such as the now-premier, François Legault, split to the right to form the CAQ.

The desperation in the camp of the PQ was obvious during the election campaign as its leader Jean-François Lisée panicked and launched a series of hysterical and dishonest attacks against QS. This tactic obviously backfired and only cemented the party’s demise. The success of QS demonstrates that labeling it as “anti-capitalist” and “anchored in Marxism” was not a deterrent for people, as they were looking for a radical break from the status quo.

Disarray and confusion within the PQ is now evident as Lisée resigned as leader, once again blaming Quebec solidaire, stating: “If the QS congress had accepted our outstretched hand, it would be a safe bet to say that tonight’s election would have seen a different result. The intense militant activity that we had to concentrate on fighting in our own ridings, we would have been able to deploy together to win other constituencies and who knows, change the outcome of the poll today.” This was in reference to the members of Quebec solidaire rejecting an alliance with the Parti Quebecois at their congress in May 2017.

With QS overtaking the PQ, the PQ is on the road to destruction. In every election without fail, the PQ has employed the tried-and-true argument of strategic voting, constantly appealing to unite the 'progressive' or sovereigntist vote. But this argument only has any force when you are the bigger party. Now that QS is ahead of the PQ, there is literally no reason at all to vote for the PQ. The rats already started to flee the sinking ship before this election, with many long-standing candidates retiring or running for the CAQ. The election result will only increase this tendency, and it is possible that the PQ will go the way of the Bloc Quebecois on the federal level. The complete obliteration of the party is a very real possibility.

The rise of Quebec solidaire

One of the defining features of this campaign was the rise of the small, left party, Quebec solidaire. The party ran a left-wing campaign focusing on bold propositions such as free education, free dental insurance, massive expansion and investment in public transportation, and the immediate implementation of a $15/hour minimum wage, among other policies.

Normally considered a “Montreal-centric” force, support for QS increased across Quebec, winning the party two seats in Quebec City, one in Sherbrooke, and one in Rouyn-Noranda-Témiscamingue. More so, with the collapse of the PQ and the Liberal vote, QS ended up polling second in 14 ridings across the province. 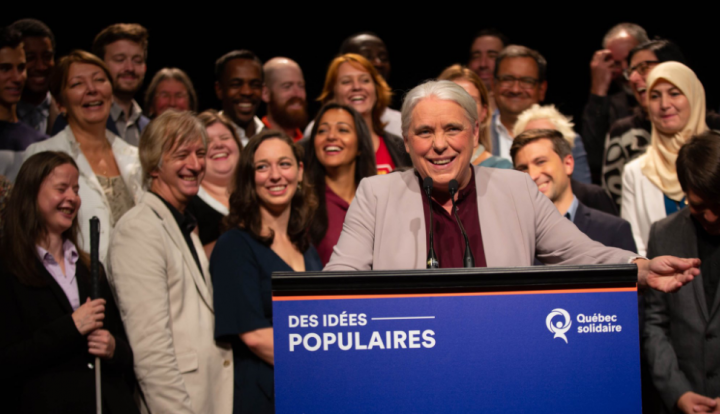 One of the defining features of this campaign was the rise of the small, left party, Quebec solidaire. It is now a major force in Quebec politics / Image: fair use

With the inevitable crisis in the PQ following their abysmal showing and the defeat of their leader in his own riding, the stage is set for QS to serve as the main opposition to the attacks from Legault. The lesser-evilism of the PQ, which was a useful tool for the capitalists to safely release the anger of the masses against the attacks of the Liberals, could very easily become a thing of the past.

In addition, while the trade union bureaucracy has traditionally had a more cozy relationship with the PQ, this will become less and less tenable. While some unions such as the CSN-Montreal, which is on the left of the labour movement, have supported QS from day one, in this election most unions simply argued against the Liberals and the CAQ and mobilised for certain PQ and QS candidates. This strategy will make less and less sense going forward as the PQ will be less of a major player compared with QS, and the positions of QS are much closer to the union movement. This logic of the current situation will push the trade unions further in the direction of Quebec solidaire.

The crushing election victory of the CAQ has sent shockwaves throughout Quebec. With a majority of the seats, Legault can rule without compromise. His party has always represented the wing of the bourgeoisie that is most eager to take the hatchet to the welfare state, continuing what the Charest Liberals began when they were first elected in 2003. While Legault hid his real aims during this election, we should not be fooled. This government will be one of vicious austerity measures and attacks on the labour movement.

In addition, this government will be the most bigoted, anti-immigrant government in recent memory. The CAQ promises to reduce immigration to Quebec from 50,000 to 40,000 per year. They have been the main force pushing the question of Quebec identity and have been using this nationalism to garner support. They have proposed a values test for new immigrants and promise to expel immigrants who have not learned French within three years.This has been met with support from the far-right group, La Meute that has become known for intimidating asylum seekers and immigrants. During the election campaign, when approached by a woman who claimed that immigrants were “erasing us”, Legault responded by saying that he would fight for “us” (i.e., Quebeckers) and told the woman to vote for him. Immediately after the election he stated that he would use the notwithstanding clause to ban public sector workers from wearing the hijab.

While many people are depressed by this election result, we should not despair. The CAQ did win a majority, but this doesn’t mean that they have support from the majority of the population. With just over 37 percent of the vote, this is the weakest majority government in the history of the province. Meanwhile, voter turnout was the lowest it has been in more than 10 years, at 67 percent. This is down from 71.4 percent turnout in 2014 and 74.6 percent in 2012. Tens-of-thousands of voters simply punished the establishment by staying home.

This government can be challenged and defeated. But this cannot solely be done in the national assembly, where the CAQ can use their majority to ram through whatever legislation they want. This must be done in the streets. The memory of the 2012 student movement is still fresh in the minds of the population, and the militant traditions of the worker and student movements must be revived to stop this government in its tracks.

Quebec trade unions are probably the strongest in North America, representing more than 40 percent of the working population in Quebec. They possess immense resources and mobilising capabilities, which must immediately be sprung into action. It is beholden on the trade union leadership to prepare a mass campaign of civil disobedience, strikes, and occupations to block Legault whenever he tries to implement cuts and racist policies to take away rights from workers and youth. Unfortunately, Daniel Boyer, president of the FTQ, said with respect to Legault:

“I give him the benefit of the doubt. I am ready to sit down with the CAQ government, with François Legault, to work together to advance Quebec.”

We must be blunt. This naive approach of conciliation with a party that Boyer himself admits is “the party the furthest away from the trade unions” is the path of defeat. There is absolutely no historical precedent that would teach us that playing nice with a right-wing, anti-union party of the bosses is a strategy that will lead to anything but disarming and weakening the movement, ultimately leading to defeat. Weakness invites aggression. Only by making it clear that Legault’s policies will be opposed in every workplace, in every school, and on the streets can we hope to force the government to back down.

A CAQ government with a Liberal opposition will offer no respite for workers and youth. The capitalists are emboldened by this election result and will push their agenda of cuts to public services and attacks on unions more boldly than before. With this situation, the support for the CAQ can fizzle out as as quickly as it has appeared, as large layers of people who voted for 'change' begin to realise what kind of change has been delivered. With this perspective, Quebec solidaire has a fantastic opportunity to channel the discontent with the CAQ into becoming a mass force. The 10 QS MNAs must act as a voice for the mass movement in the national assembly and use their position as a megaphone to organise and popularise the coming movement against the government.

This fightback has already begun with the youth leading the way! This coming Sunday, there will be a big demonstration against racism that Socialist Fightback is helping to organise. You can join our socialist contingent at 2:30pm on 7 October at Place Emilie Gamelin (metro Berri-UQAM) in Montreal. You can also come to our event on how to defeat the CAQ, which is taking place next Wednesday, 10 October. The details are here.

The next few years in Quebec will be extremely turbulent. Consciousness will change by leaps and bounds as workers and youth become acquainted with the true nature of the capitalist system. The election of the CAQ is not an isolated example. The political polarisation and the constant attacks on our living standards are manifestations of the dead end that the capitalist system finds itself in. Only a socialist program can offer us a way out of this situation.