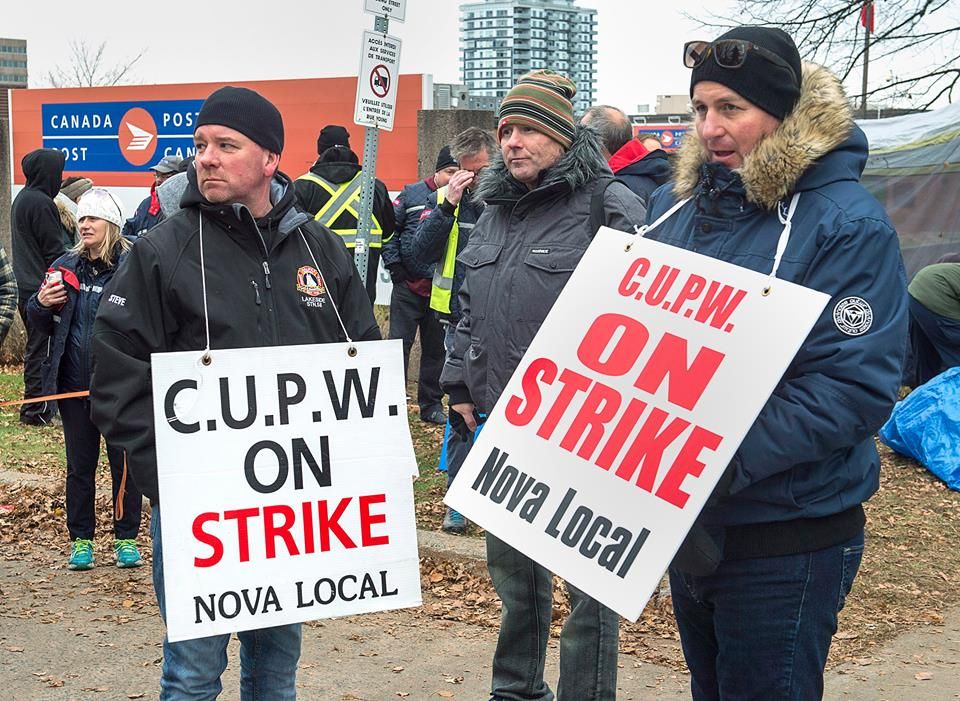 50,000 members of the Canadian Union of Postal Workers (CUPW) have been on rotating strike since 22 October. The Trudeau Liberal government has tabled so-called “back-to-work” legislation, that will make this work stoppage illegal. Increasingly, the right to strike in Canada is not worth the paper it is written on. As soon as a strike becomes effective, it is declared illegal. However, the postal workers are angry and there is a real opportunity that they will defy the legislation. Solidarity is urgently needed to let the CUPW workers know they are not alone, and that workers in Canada and internationally support their fight.

The main issues of this strike are pay equity for underpaid rural mail carriers who are predominantly female, and an injury crisis fuelled by overburdening and forced overtime. This has led Canada Post to have the highest injury rate in the sector, with 1 in 4 workers suffering injury every year. The workers are literally sick and tired of these issues being ignored by management, and have decided to put their foot down to solve them once and for all through this round of negotiations.

The degree of understaffing is revealed by the fact that even the limited action of rotating strikes and an overtime ban has led to gridlock at sorting plants and to Canada Post losing hundreds of millions of dollars.

'Back-to-work': a scourge on freedom to strike

Canada Post is a publicly owned corporation that is supposed to be independent, but in reality the government has a huge influence. Business lobby groups have been howling for the government to act heading into the “Black Friday” sales weekend ahead of the Christmas retail period. The strike has significantly depressed online sales from Amazon and other retailers who rely on parcel shipping from Canada Post. The Trudeau Liberals have now brought the hammer down on the workers, showing they follow the dictats of their corporate paymasters. This is despite the fact that Trudeau has presented himself as a friend of workers, and opposed the Harper Conservatives when they last used legislation against CUPW in 2011.

Ironically, just one day before the federal Liberals said that the cupboard was bare for the postal workers, they announced $16-billion of tax breaks for big business. This stark contrast should send a resounding message to all those in the labour movement who have given support to the Liberals in recent years.

Back-to-work legislation is a scourge that has increasingly afflicted collective bargaining in Canada. Public sector bosses have no incentive to bargain and just sit back and wait for the government to declare a strike illegal. This weapon to smash workers is now even being used in the private sector when a strike is deemed to have “too much” impact. In fact, such legislation does not shorten the length of strikes. Instead, the use of anti-democratic legislation has greatly increased the frustration of workers. Strike votes of 80 percent, 90 percent, even 100 percent are now common as the workers’ issues remain unresolved. CUPW received a 95 percent strike mandate in the current dispute and this discontent cannot just be legislated away. The question is whether the just issues of the workers will be resolved now, or will they be left to fester and prepare for a new explosion a few years down the road.

Unfortunately, up until now the leadership of Canada’s unions have let down their workers. Despite the anger of the membership they have failed to give the lead and defy back-to-work legislation. This has led us to the present situation where the right to strike is violated in a routine fashion. Conditions are steadily eroded while management lords over the workers. This will continue to occur until one union has the courage to stand up to the state and defy. The top bureaucrats always say that now is not the time, or that the workers are not ready. They hide their cowardice by blaming their members. But in the Canada Post strike all accounts point to a desire to fight in the rank and file. Spontaneous plant occupations and unsanctioned walkouts have been bursting forward. The question arises, “If not now, then when? If not CUPW, then who?” This is the strike to draw a line in the sand and stand up for the right of all workers to withdraw their labour. This is the strike to say that women workers will not be undervalued for doing the same labour as male workers. This is the strike to say that workers will not sacrifice their bodies at the altar of corporate profit.

Repeatedly, unions have won in the courts, arguing that back-to-work legislation is a violation of Canada’s Charter right to freedom of association. This was even the case when the 2011 legislation against CUPW was challenged. But that is not a reason to obey such legislation while waiting for a court decision – precisely the opposite. When unions have obeyed these illegal laws, the harm still occurs and the years-later court victory solves nothing. The union would not be breaking the law by continuing the strike - it is the government that is breaking the law by passing the legislation. In the 19th century all unions were illegal in Canada. Union members were arrested for “joining a conspiracy to raise wages”. If workers hadn’t defied such laws there would be no unions today. The lesson is clear.

In a previous article we explained how CUPW has an amazing history of struggle:

“From 1974 to 1976, CUPW led a number of illegal strikes, one of which resulted in fair wages being won for women stuck in low-pay positions. In 1978, after months of failed negotiations under Trudeau Sr., another legal strike was held that resulted in back-to-work legislation being issued that very same day. Rather than submit, workers chose to defy the law, an act for which CUPW leader Jean-Claude Parrot was sentenced to three months in prison. In 1981, CUPW went on strike yet again, this time for paid maternity leave. Fearing the resistance these workers might pose—individuals who were clearly not afraid of breaking the law—management caved in to their demands, leading to CUPW becoming the first union in Canada to win paid maternity leave for its members. If any union can be said to carry defiance in its DNA, it is CUPW. This also explains why Trudeau is so eager to crush their current strike. His hope is that by defeating one of Canada’s most historically militant unions, other workers will be dissuaded from following in their footsteps.”

In addition to this inspiring history, and the desire of the workers to fight, there is a possibility that the present leadership of the union may buck the depressing trend at the top of Canada’s unions. In his youth, CUPW president Mike Palecek was a regular writer for Fightback, the IMT’s paper in Canada, where he frequently defended the position that unions should defy back-to-work legislation. It is vital that we support those inside CUPW who do not want to capitulate to the anti-democratic attack of the Trudeau government. The entire CUPW executive must hold strong and not sell out their members. Now is the time to turn the tide of the corporate onslaught.

An injury to one is an injury to all, and CUPW is fighting for every workers’ right to strike / Image: CUPW

It is also essential that the broader labour movement not leave CUPW to fight alone. The Canadian Labour Congress (CLC) must do its duty and organize mass protests and solidarity strikes in support. Unions who have previously had their rights violated should obviously be on the front line. The Trudeau government can be forced to back down by a large enough movement. They have no mandate for an anti-union offensive, and are attempting to maintain a fake-left facade heading into the 2019 election year. The CLC needs to set up a fund to help CUPW with the inevitable fines and injunctions from illegal strikes. Solidarity committees should be struck in every local to support the postal workers, and CUPW members should actively send delegations to local workplaces to bring them into the struggle. An injury to one is an injury to all, and CUPW is fighting for every workers’ right to strike.

We call on our supporters, as individuals, or via their union locals (branches), youth groups, or party associations, to send messages of solidarity to Canada Post workers.

Please send these messages to:

CUPW: This email address is being protected from spambots. You need JavaScript enabled to view it.

Mike Palecek: This email address is being protected from spambots. You need JavaScript enabled to view it.

Labour Fightback: This email address is being protected from spambots. You need JavaScript enabled to view it.

We will publish a selection of messages to deliver to the workers on the picket lines.