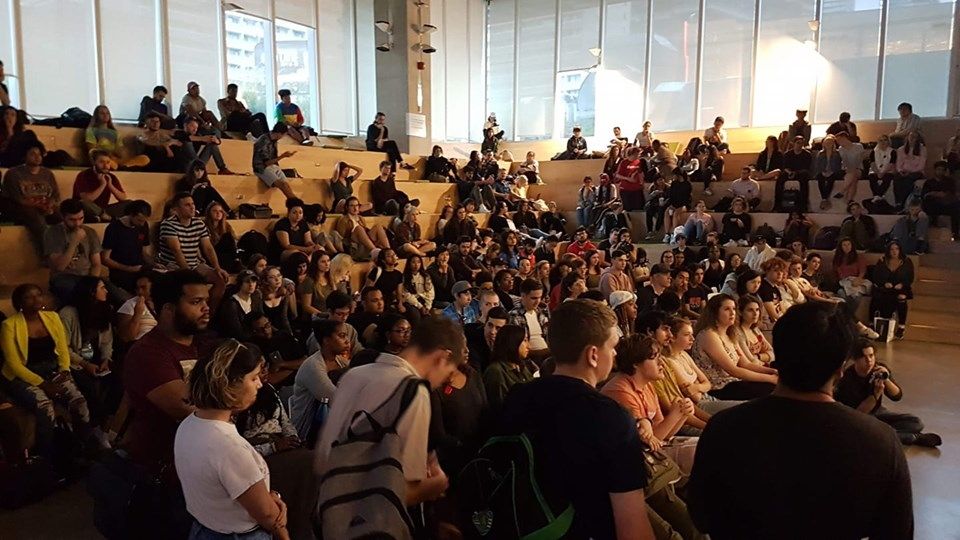 On Wednesday, 25 September, Ryerson students organised a historic mass meeting. This general assembly, the first organised in English Canada in decades, marks an enormous step forward in the struggle against Ontario Premier Doug Ford’s cuts to higher education. In this mass meeting of more than 200 students, the proposal for a one-day student strike on 6 November was put forward and passed with an overwhelming majority.

The meeting itself was notable for enthusiastic speeches and support from activists and students involved in the Ryerson Student Strike group, as well as members of Socialist Fightback Students, faculty, and even the Ontario Federation of Labour. Such a broad coalition reflects the deep well of anger within Ontario at the massive cuts Ford’s government has put in place, as well as the frustration of students being crushed under the weight of the cuts to the Ontario Student Assistance Plan.

The need for a student strike is clear

As the meeting began, Hermes Azam – one of the lead spokespeople of the Ryerson Student Strike Committee – stood up to call the meeting to order with a short introduction. He emphasised that this meeting was historic. No vote on a student strike had taken place in English Canada since the Canadian Federation of Students organised a strike in 1996. Hermes also said that: “It is a shame that the Ryerson Student Union executive was missing this historic meeting by refusing to participate.” Two days prior, student strike supporters met with campus executive members, who informed activists that they would not help the strike initiative. As a result, they were noticeably absent from the assembly.

Following Hermes, Ryerson alumni and Socialist Fightback organiser, Marco La Grotta, was invited to speak. Marco presented a grim picture of the effects of the OSAP cuts at Ryerson. Students have been unable to afford food, unable to pay rent, and virtually barred from a quality post-secondary education. Marco criticised student union leaders who advocated lobbying or a second walkout to stop the cuts, arguing that both these approaches had been tried and failed. Students now have no option but to escalate in the direction of a strike. As proof that students aren’t afraid of strikes, Marco pointed to the fact that millions of students worldwide are participating in the Global Climate Strike this week. He also highlighted the irony of student union leaders lavishing praise on the climate strike, while actively ignoring and even suppressing a strike movement of their own members.

Instead, at the same time as this historic meeting, the elected leaders of the student movement at Ryerson were organising a karaoke night. Upon learning this, the crowd burst out into cries of “Shame!” This negligence is an open betrayal of the mandate from last year’s annual general assembly, which voted in favour of a student strike. Marco continued, pointing out that students cannot wait for the union officialdom to move. They are suffering now, and a fight against these cuts must begin in earnest as the situation is critical.

Following Marco, another guest was asked to speak. Professor Antoine Panaioti from the Department of Philosophy at Ryerson spoke on the role of the faculty in the case of a strike and drew on his experiences from both the 2005 and 2012 Quebec student strikes. In both of these astounding movements, the students fought and in 2012, they even managed to bring down the Liberal government that had been putting forward tuition increases! Professor Panaioti pointed out that this is why Quebec to this day has the lowest tuition fees in Canada. He also highlighted that the faculty at Ryerson would support students and that many professors have already made it clear they would not punish students for striking. Any fight against the Ford government would have the support of the faculty, and must link up with the workers to be successful overall.

After these opening speakers, student activist with the Ryerson Student Strike Committee, Olive Pape, put forward a resolution for a one-day student strike on 6 November. She pointed out that a strike was entirely possible, and that the enthusiasm for action against the cuts was there. Discussion then opened up for 30 minutes on the resolution. Students went up to speak on how the cuts have impacted them and the need for a strike. Not a single student spoke against the resolution. Discussion ranged from the fact that these cuts are actively pushing working-class students out of post-secondary education, to the fact that students have the power and ability to organise and fight these cuts. One notable intervention by Ryerson Student Strike activist Jamie Graham highlighted the fact that accessibility is often posed by some student bureaucrats as a reason not to organise. The biggest accessibility issues, however, come not from student strikes and mass general assemblies, but from the cutting of campus services and skyrocketing tuition costs. This was massively welcomed by the crowd of students, who cheered at what Jamie was saying.

After this enthusiastic discussion, the vote was taken. Of the over-200 students present, only one student voted against. With this massive strike mandate, the entire crowd of students erupted into cheers. Spontaneous chants of “Fuck Doug Ford!” could be heard echoing through the SLC building. With this large boost to morale, more than 100 students streamed to the mobilisation tables at the end of the meeting to join the Ryerson Student Strike Committee, which will be responsible for planning further actions and organising the strike itself.

Only the beginning: spread the strike across Ontario!

This vote in favour of a student strike was a historic step forward for the fight against Ford’s cuts. It shows that the mood exists for a student strike in Ontario. Over the past month, we have been told over and over by bureaucratic pessimists that it is not possible to organise students, that Ryerson is too right-wing, and even that our best chance is to wait three years and vote Ford out of power. However, Ryerson students have proven otherwise. We do not need to endure three years of cuts: the fight can and must start now. It is entirely possible to organise students and build a strong student strike across Ontario.

There is nothing special about Ryerson that led to this historic strike vote. Ryerson students are not any more oppressed by Ford than any other campus in the province. Ryerson students are not any more radical than other campuses (in fact Ryerson is a commuter school with not a very big tradition of student engagement). The only difference between Ryerson and other campuses was that there is a committed group of grassroots activists willing to put in the work and overcome bureaucratic obstacles to provide a forum where the genuine opinion of students can be expressed. There is no reason why similar movements cannot erupt at every school in Ontario.

Ryerson students must not stand alone. All over Ontario, we are hearing similar stories of students struggling under the weight of these cuts. The fight must spread. All over the province, on every campus, general assemblies with student strike votes must be organised for a mass one-day student strike on 6 November. This fight must bring in campus workers, the faculty, and join with the broader labour movement in order to be successful.

If you are a Ryerson student, we encourage you to get involved in the Ryerson Student Strike Committee to help students organise the 6 November one-day student strike. If you are a student at another campus, contact us now for advice on how to spread this movement. If you are a worker, support our struggle and use the experience of the students to raise the call for broader strike action against the Ford regime. As Olive Pape said in moving the strike motion, “We have nothing to lose but our loans, and free education to win!”

Originally published on 26 September by Fightback|