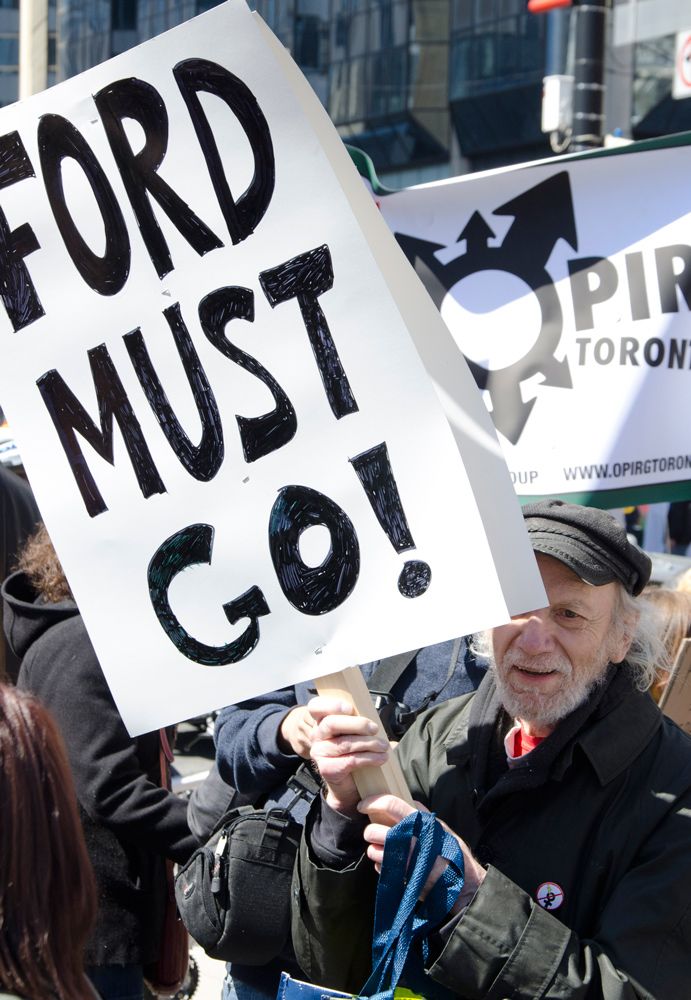 The recently completed core services review has stripped Toronto mayor Rob Ford of his populist façade, and revealed the true extent of the austerity to come in Canada’s largest city. Almost every single aspect that makes capitalism semi-bearable for working-class people is about to be taken away.

When he was first elected last year, Rob Ford promised that he would end the “gravy train” at City Hall. He promised that he would restore Toronto’s financial affairs, while cutting taxes, eliminating the vehicle registration tax, and not cutting any public programs or services. “Services will not be cut, guaranteed,” Ford infamously said just before last year’s municipal election. All that would be needed was to cut waste and “gravy”. Given the general disappointment from the David Miller years, Ford’s populism resonated with many Torontonians, especially those in the working-class inner suburbs, and he was elected in a landslide.

However, Rob Ford and his city councillor brother, Doug, have no interest in “gravy”. Their real plan is to implement permanent austerity and force workers to pay for the crisis of capitalism. One such example is the fact that they continue to trot out Toronto’s anticipated “record” deficit of $774-million in 2012. On closer inspection, that number is supposed to be closer to $440-million. But, the higher number better suits the Fords’ mission in justifying the destruction of public jobs and services.

Bay Street consulting firm KPMG recently completed their core services review, for which they were paid $350,000 by the supposedly cash-strapped city council. The Ford brothers had ordered KPMG to find the “gravy” in Toronto’s budget. What were the results from KPMG?

For starters, the review found that 96% of the much-maligned public works budget was “uncuttable”, leaving, at most, potential savings of just id="mce_marker"0-million on an annual budget of over id="mce_marker"-billion. Ending the fluoridation of city water (which helps prevent tooth decay for the many who cannot afford regular trips to the dentist) certainly seems worth the piddly savings that could be achieved by these high-priced consultants!

But, the review gets much scarier. KPMG suggested that every single city service and every single city job should be targeted. Following on the KPMG suggestions, Mayor Ford threw out a buyout offer to 17,000 city workers, threatening them with layoffs if they did not take the buyout. “We have to look at ways of downsizing our workforce. We have too many employees here. Everyone you talk to agrees with that assessment,” said Rob Ford.

The KPMG review is only the latest step in Ford’s escalating attacks on city workers. Earlier this year, he asked the Ontario government to declare the Toronto Transit Commission (TTC) to be an essential service, taking away transit workers’ right to strike. His council then privatized garbage collection in the western half of the city, with an eventual plan to privatize all waste services once the contract with city workers expires at the end of 2011. Mark Ferguson, the president of CUPE 416 (the union local which represents Toronto’s outside workers) revealed the mayor’s plans to the Globe and Mail: “I do expect that with this administration, a lock-out will take place.”

Even police and firefighters are no longer considered to be sacrosanct in the push towards austerity. According to Toronto police chief Bill Blair, the demanded cuts will mean that as many as 750 police officers and 400 staff will need to be let go. KPMG has even suggested that police officers be assigned to single-officer patrols in order to save money. The city already eliminated this year’s funding for fire service recruiting classes, which essentially means that 50 new firefighting positions have been axed. Toronto already was well below the recommended staffing level and according to the president of the firefighters’ union, the average response time in Toronto has climbed over the minimum standards laid out by the National Fire Protection Association.

As usual, the TTC has also come under the watch of the Bay Street consultants. KPMG has proposed privatizing some of the more lucrative TTC routes, making Wheel Trans (the service that provides transportation for the disabled) even more difficult to qualify to use, and even eliminating night buses. This is in addition to the earlier cancellation of Transit City, the plan laid out by the previous city council that would have expanded rapid transit to the working-class inner suburbs that are poorly served by public transit at the moment.

But it is not just workers directly employed by the city who will be drastically affected by capitalist austerity. KPMG reviews touch on almost every single aspect of city living. Included in the suggestions are the privatization of over 900 homes currently owned by Toronto Community Housing Corporation (TCHC), the elimination of 2,000 subsidized childcare spaces, the selling off of “a couple of community centres”, the sale of the city’s long-term homes for seniors, the privatization of the Toronto Zoo, the closing-down of petting zoos at Riverdale Farm and High Park, increased user fees for almost any city service, etc. The review even suggests eliminating funding for AIDS prevention programs!

The attacks proposed under the core services review are not coming about because Rob Ford was elected mayor last year; indeed, we would have seen similar attacks if George Smitherman or Joe Pantalone had been elected. These cuts are demanded by capitalism.

As we are currently seeing in Western Europe and the US, the working class is being forced to pay for the speculation and bailouts of the bosses. The bailouts and corporate welfare given to the bosses during the Great Recession are being used as an excuse for an all-out offensive against workers. The only chance that workers have to defend their jobs and living conditions is to fight like they have never done before.

From Bay Street’s point of view, the Fords’ ham-fisted zeal is starting to become dangerous. The pettiness of some of the cuts (e.g. saving id="mce_marker"00,000 by eliminating the distribution of Christmas presents to poor kids), or attacking Toronto’s public library system has generated much opposition, even from Toronto’s elite. Doug Ford’s ridiculous assertion that there are more libraries than Tim Horton’s outlets, as well as his ignorance of Margaret Atwood (who has been a very outspoken critic of the library closures) prompted Atwood to worry whether “creative people” and “people like her” will be welcome in Toronto. In some respects, the Fords are the best thing that could have happened to the labour movement in Toronto — they are an easy target for a mass base united against cuts to public jobs and services.

Rob Ford’s plans are a product of the capitalist crisis; the cuts and attacks demanded by KPMG is what Bay Street is demanding from all levels of government and the burden is especially going to be put on the public sector. But, as seen in Toronto, it will not just be public sector workers that will be affected; everyone is going to see their standard of living slashed, be it from a lack of public transit services to not having access to childcare.

Ford’s executive committee is set to meet at the end of September to decide what is going to be cut from the city’s budget. If the austerity is as bad as the KPMG review suggests, then the whole of Toronto’s working class — not just unionized public-sector workers — will need to mobilize. This is going to be an attack on us all. It is vital that the Toronto & York District Labour Council and the Ontario Federation of Labour (OFL) take a lead role in organizing the mobilization. Rallies, demonstrations, strikes, and civil disobedience need to be organized, leading up to a one-day general strike in the city of Toronto if the cuts are not reversed. With the labour movement at its head, all of the disparate groups that will be affected by the Ford cuts — public-sector workers, the poor, immigrants, youth, artists, etc. — can unite and win.

There can be no weakness or hesitation in this struggle against austerity; otherwise, the Bay Street bosses will only be emboldened to attack us even more. A one-day general strike is necessary to show them that we will not take their attack lying down; we are united in fighting back against capitalist austerity, and united in fighting for a better world.