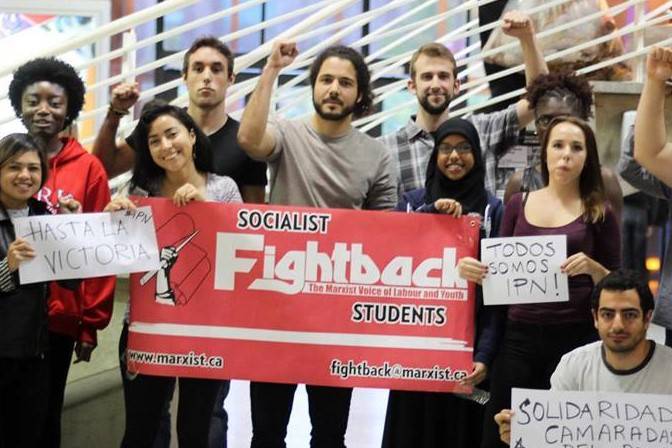 Fightback is launching a campaign to hire its fourth full-time organizer. Our aim is to unite revolutionary youth in the struggle for free education, student-worker solidarity, and for a socialist alternative to austerity. This initiative comes after important successes over the past several years, including the hiring of our first full-time organizer in Quebec and the opening of our first office in Toronto.

Farshad Azadian, a long-time student and Iranian community activist, has made the decision to leave aside his career as a lawyer so that he can work full-time for the revolutionary struggle. We are trying to raise funds from the movement so he can do this on minimum wage to pay for rent and groceries. At a time of a growing interest in socialism across North America, your support for our campaign to hire Farshad today will make a huge difference in our ability to build radical struggle tomorrow.

Farshad is a dedicated fighter with a proven track record in organizing and community activism. He has organized student sit-ins and walkouts for free education, was involved in mobilizations to spread the 2012 Quebec student strike to English Canada, has helped to rally students and youth in solidarity with postal workers, bus drivers, city workers, campus workers, and for many labour struggles of importance across the city, province and elsewhere.

He also led neighbourhood anti-racist and anti-poverty organizing efforts in Toronto’s Downtown Eastside, fought the Toronto G20 and was illegally detained and imprisoned with thousands of others, defended socialism and social ownership at the federal NDP convention, and helped to unite communities in support of Iranian revolutionaries fighting the dictatorship.

This was always done in his spare time. With your help, Farshad will be able to dedicate his full attention to the building of an even bigger movement – and still be able to eat and have a roof over his head.

Contribute to support this campaign because you would like to see:

«  The radicalism of the Quebec student movement in English Canada.

«  Mass organizing and education for international solidarity, anti-racism, as well as student and labour struggles.

«  Strong revolutionary media as an alternative to the mainstream corporate press.

«  A new generation of fighters to denounce capitalist injustice with passion and eloquence.

If you can give a regular monthly contribution of $10, $25, $50, or $100, we can make this a reality. In return, you will receive an ongoing subscription to Fightback and/or La Riposte magazine.

To give regular support to Fightback in this campaign, please send a void cheque to: Fightback, 366 Danforth Ave., Suite 201, Toronto, ON, M4K 1N8. Individual one-time donation cheques should be made out to Fightback, memo: “Farshad Azadian organizer campaign”.

Cash and in-kind donations are also greatly appreciated. Farshad needs office and computer equipment to be effective. Perhaps you have a second-hand laptop or computer you can donate to the struggle? Whatever you can contribute will make a difference.

Contact us at 416 461 0304 or fightback@marxist.ca for more information or to share ideas about this campaign and the movement.