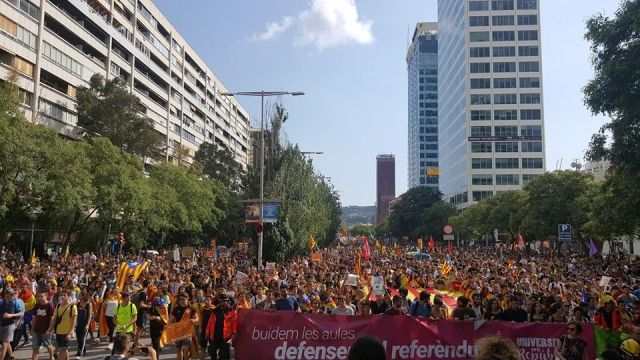 The Catalan masses are gearing up for a massive strike movement today, as key unions commit to a nationwide ‘stoppage’ after facing brutal repression by the Spanish state during the referendum on Sunday. The referendum movement is developing a radical, working-class character under pressure from below, putting a Catalan Republic on the agenda. This is opening up a crisis with the potential to topple the Spanish regime.

Yesterday, 4,000 Catalans marched to the Hotel Gaudi in Reus (where riot police drafted in to prevent the Catalan independence referendum are staying) chanting: "fora les forces d'ocupació" (occupation forces out). Similar protests have taken place in Calella, Igualada, Pineda, Manresa and Barcelona, reflecting widespread anger at the brutal actions of Civil Guards and National Police during the referendum. In the minds of many people, the referendum is over and the ‘occupiers’ should leave, never to return.

Meanwhile, under enormous pressure from below, the Roundtable for Democracy announced a "countrywide stoppage": that is to say, not a strike. This is a clear attempt to be seen as doing something against Spanish repression, while containing the movement, to prevent a proper general strike from developing.

On Monday, the two main unions in Catalonia, CCOO and UGT, issued a statement once again clarifying that they are not calling for a national strike. Rather than coordinated action, the idea is that individual workers will down tools of their own accord, or reach agreements with their employers to shut down workplaces without loss of pay. The Catalan government has already joined the "stoppage" and therefore public sector workers taking the day off will not have their wages deducted.

Without explicitly calling for a strike, or taking responsibility for one, the union tops are trying to satisfy the enormous mass pressure coming from below. But in the minds of large layers of the masses this is a signal for a general strike. The action has already been joined by a number of the small unions (CGT, COS, IAC, I-CSC) that nevertheless have a significant presence in key services like education, healthcare and public transport. In a mass assembly on Monday morning, Barcelona dockers also threw in with the ‘stoppage’. Even the Catalan broadcaster, TV3, announced that it would cease service ‒ as its workers have joined the strike!

Despite the manoeuvres of the union tops and the ruling party, the pressure from below is giving this movement a very radical character. Referendum Defence Committees have been turned into Strike Committees, with sizeable meetings on Monday evening in Poble Sec and Gràcia.

Today, Catalonia will be paralyzed by the strikes and mass demonstrations. Already today tens of thousands have gathered outside workplaces and town halls at noon to protest repression. Meanwhile, in Barcelona, thousands of students joined a silent demonstration against the actions of the Spanish state.

These events are further evidence of the Catalan people’s refusal to be cowed by violence and repression, and the will of a sizeable layer to establish a Catalan Republic. Meanwhile, the Catalan president has issued an appeal for a mediation by the EU so that a dialogue can be opened between the Catalan and Spanish governments. This offer has been rejected by both Spain and Brussels, which in itself represents a step back by Carles Puigdemont, who is bound by a law passed by the Catalan parliament to declare independence within 48 hours of the (overwhelming) yes vote.

PSOE leader, Pedro Sanchez, has demanded that Spanish Prime Minister, Mariano Rajoy open negotiations with the Catalan government. However, Rajoy is relying on the votes of Ciudadanos, which is demanding the implementation of art 155 of the Constitution in order to suspend Catalan self-rule and then call for new Catalan parliament elections. This crisis could lead to the downfall of the Rajoy government.

The next few days will see sorts of attempts to defuse this crisis with negotiations from above. Only the widest mobilisation of the Catalan people can prevent this. Catalan MP Anna Gabriel, a spokesperson for the pro-independence, anti-capitalist CUP, correctly stated: “the Referendum Defence Committees should not be disbanded, they should be kept and used to organise the general strike on the 3rd and become embryos of people's’ power”.

This is the right way forward. Moreover, the defence committees should turn into strike committees and continue to organise the mobilisation for the Catalan republic. They should be linked up at local, county and national level in order to give the movement a democratic structure, so that no-one can speak for the people but the people themselves. An emergency national assembly of representatives from the Defence Committees should be convened immediately to democratically discuss the way forward for the struggle.

If a Catalan Republic is to be born, the movement must appeal to those layers of the Catalan working class that have yet to join the movement. Many of these workers are justly wary of PDCAT, which they know full well is a right wing, pro-austerity party.

The movement also needs to link up with the solidarity movement already forming outside of Catalonia in the Basque Country, Galicia, Madrid, Seville and many other places in Spain. To accomplish this it must acquire a clearer anti-austerity, anti-regime and anti-capitalist character to unite Spanish and Catalan workers against their common enemy: the bosses and bourgeois politicians.