Spain
Share
Tweet
For the Marxists, it was vital to take advantage of Chavez' visit to Spain to show the solidarity of the Spanish working class and youth with the Venezuelan Revolution. 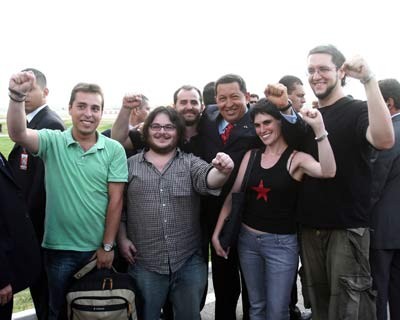 For the Marxists, it was vital to take advantage of Chavez' visit to Spain to show the solidarity of the Spanish working class and youth with the Venezuelan Revolution.

To this end, representatives of Spanish Students' Union, the Marxist current El Militante, and the international Hands Off Venezuela campaign, organized a morning meeting in the "Parque del Este" park in front of the statue of Simon Bolivar. Some 100 people participated, including trade union leaders from the CCOO and STES labor federations.

The event was energetic, with slogans that reflected the enormous combativity of those in attendance, who were inspired by the revolutionary example of  Venezuela, chanting slogans such as: "Hands Off Venezuela!"  "Alert! Alert! Alert! Socialist Revolution is Spreading Across Latin America!" "Native or Foreign Born - the Same Working Class!" and "Uh, Ah, Chavez Will Not Go!" Three large banners were also present: "Hands Off Venezuela" "For a Socialist Federation of Latin America" and "May They Never Shut You Up, Comandante" - a reference to last year's confrontation with the Spanish King, who told Chavez to "shut up".

A large number of media were present, particularly Venezuelan media, and we were able to discuss with them, particularly the main state channel Venezolana de Television and Telesur.

The event ended with a few words from Juanjo López, general secretary of the Spanish Students' Union, and Miriam Municio, spokesperson for Hands Off Venezuela in Spain. They explained the objectives of the gathering and the enormous importance of international solidarity. Juanjo López explained how the revolution is striking terror in the hearts of the imperialists. They are deathly afraid that it will spread worldwide - which is already beginning. This is why they spread lies about what is really happening in Venezuela: the beginnings of a profound change in society and the struggle for socialism.

Miriam Municio explained that the economic crisis shaking the big capitalist powers is an example of the impossibility to have "capitalism with a human face". This is proven by the recently approved legislation which extends the workweek of European workers to 65 hours. This is why the only solution is socialism. This is why we defend the Venezuelan revolution, why we think it should continue forward, expropriating the key levers of the economy, which remain in the hands of the capitalists, and why the revolution needs to abolish the bourgeois state, which aims to boycott the revolution.

This event was an example of the kind of solidarity the revolution needs: internationalist working class solidarity. The victory of the Venezuelan Revolution would be a decisive lever to transform the world.

At the same time, representatives of Hands Off Venezuela and the Students' Union in Mallorca organized a reception for President Chavez with a banner that read: "Welcome Comrade Chavez, Solidarity with the Latin American Revolution".

Press Conference at the Presidential Palace in Madrid

Later in the day, the members of the Editorial Board of El Militante (Spain), were able to participate in a press conference held by President Chavez and Spanish Prime Minister Zapatero at the Moncloa Presidential Palace.

The comrades hoped to ask about the nationalizations the Chavez government is carrying out to the benefit of the Venezuelan working class and people in general. Nationalizations like that of Sidor are criticized by the capitalists, and yet they have no qualms about bailing out banks affected by the crisis of the financial sector with billions in taxpayer money. We wanted to know Chavez' opinion of this hypocritical attitude of the bourgeoisie, but unfortunately, we did not have the opportunity to ask the question.

President Chavez made it clear that Venezuela is in the middle of a revolution. He explained that this is taking place throughout Latin America and that whoever does not see this does not want to see it. He said that we are immersed in an enormous crisis at all levels: food, energy, finances and even moral. He asserted that this was nothing more nor less than the crisis of the entire epoch. We share this analysis with the President. And we would go further: what we are dealing with is a world crisis of the capitalist system, which has long ago past its "sell by" date.

Chavez Meets with a Delegation of Revolutionaries 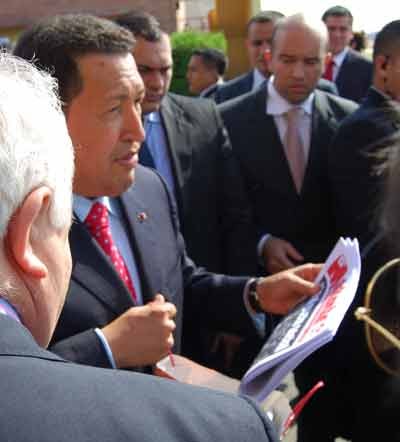 At the Torrejón military base, from where the President was leaving for Venezuela, Chavez met with a delegation of representatives from the Spanish Students' Union, Hands Off Venezuela, and the Marxist tendency El Militante. The reception was very warm. We invited President Chavez to return to Madrid in the Spring to participate a mass event of solidarity with the Venezuelan Revolution, like the event organized by Hands Off Venezuela in Vienna in May of 2006.

Chavez was very interested in the Students Union, and informed us that he had seen the Hands Off Venezuela delegation in Venezuela. He also asked if Alan Woods, founder of Hands Off Venezuela and a leading comrade of the International Marxist Tendency was around. He said he had followed Alan's tour in Venezuela when he presented his new book Reformism Or Revolution: Marxism and Socialism of the 21st Century (reply to Heinz Dieterich).

We also gave the President some political materials, including the latest book published by the Frederck Engels Foundation, History of the Russian Revolution by the great Marxist Leon Trotsky. Chavez was very pleased and expressed great interest. The discussion ended with the cry: "Fatherland or death: we will be victorious!"

Just before the President got back on the plane to return to Venezuela, we took pictures with Chavez, with our fists in the air, yelling "Long live revolution! Long live socialism!" The President encouraged us to continue the struggle and insisted on the need to transform the system. 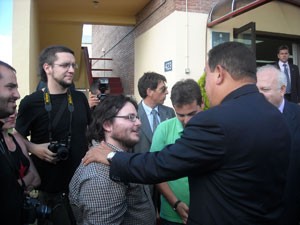