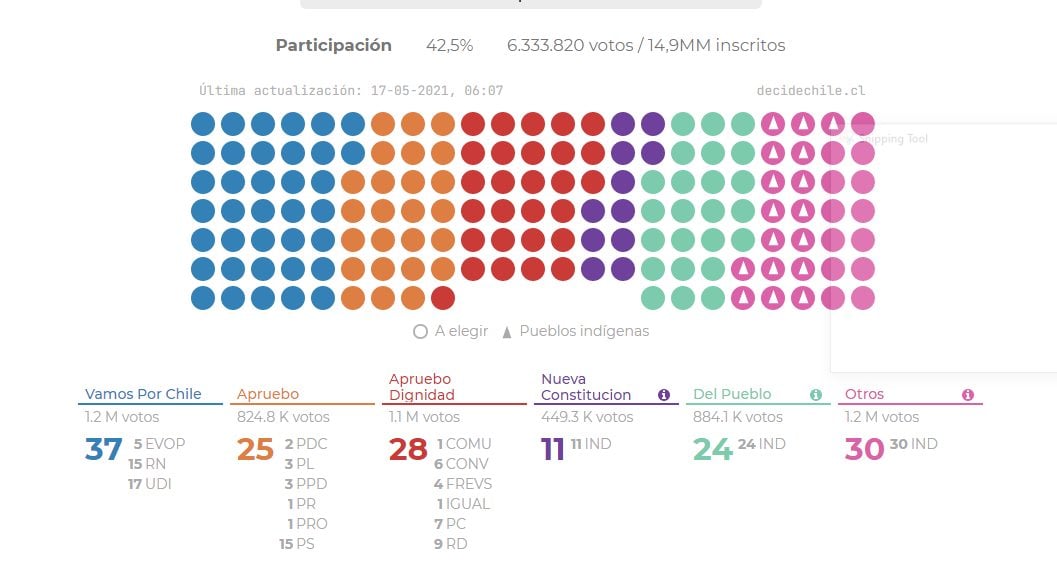 The results of the elections to the Constituent Convention in Chile over the weekend represent a political earthquake, showing a strong rejection of all established parties, which can be understood as the (distorted) political expression of the 2019 insurrection.

The results highlight at least three important things. First, the defeat of the right wing, which elected 37 Convention members, with 20 percent of the vote. With this, they do not reach the veto power that they aimed to achieve, for which they would have required one-third in the Convention, where all decisions have to be reached by a two-thirds majority.

Second, there was a strong showing of independents, who won 48 seats, which corresponds to 31 percent of the total of 155 conventional deputies.

In particular, the results of the People's List (La Lista del Pueblo) stand out. This is a list of left-wing independents who present themselves as representatives of the October 2019 uprising. They obtained 27 conventional deputies, surpassing the former Concertación (the centre-left coalition grouping the Socialist Party and the Christian Democrats).

And finally, the high electoral abstention. Only 42 percent of those registered went to vote, compared to 51 percent who voted in the constitutional plebiscite last October.

The Approve with Dignity list, which groups together parties from the Broad Front and the Communist Party, plus FRVS (Social Green Regionalist Federation), obtained 28 deputies altogether, a significant 18 percent of the seats, overtaking the Concertación and placing them as the main opposition and the main left bloc.

The parties of the ex-Concertación came out very badly, with 25 deputies, 16 percent of the total. Like the right-wing bloc, they have acknowledged their defeat, which is an indication of the agony of the parties of the Transition, which have ruled Chile for the last 30 years. This leaves the centre-left in a weak position in possible joint left-wing primaries for the presidential election later this year.

The largest number of votes received by any Constituent Convention member were cast for the labour lawyer Daniel Stingo: an independent within the list of the left-wing Revolución Democrática list. Several of the independents elected were direct representatives and known figures of the 2019 uprising, including “Aunt Pikachu”, a pop icon of the Plaza Dignidad demonstrations, who won in district 12.

In the 17 seats reserved for indigenous peoples, it is striking that Mapuche women of great notoriety, like the machi [traditional leader] Francisca Linconao were elected.

In addition to the constituent elections, over the two-election days of the weekend, regional governors, mayors and councilors were also elected.

Rodrigo Mundaca's victory as governor of the Valparaíso Region is remarkable. He is a social leader with a long history in the struggle in defence of water in his home province of Petorca, and he is a spokesperson for MODATIMA (Movement for the Defense of Water, Land and the Environment). He won in the first round with 44 percent of the votes, on the left-wing Broad Front (Frente Amplio) list.

Also noteworthy is the reelection of Jorge Scharp as mayor of the port city of Valparaíso, with a majority of 55 percent. In 2016, Sharp won as a member of the Frente Amplio, but after the agreement of November 2019, he left the coalition. This time, he was running as an independent without the support of the FA, following a controversial administration in which he reduced the municipal deficit but also saw conflicts with employees and accusations from a group of councilors for irregularities.

In the neighbouring city of Viña del Mar, the candidate of the Democratic Revolution (RD), Macarena Ripamonti, won in a municipality that had been ruled by the right-wing UDI for 16 years.

In the capital, in a narrow election, after 24 years of right-wing mayors, the Ñuñoa commune will have a mayor from the left-wing RD, Emilia Ríos. Also significant was the victory of the RD in the commune of Maipú and the departure of the “independent” UDI mayor Cathy Barriga. 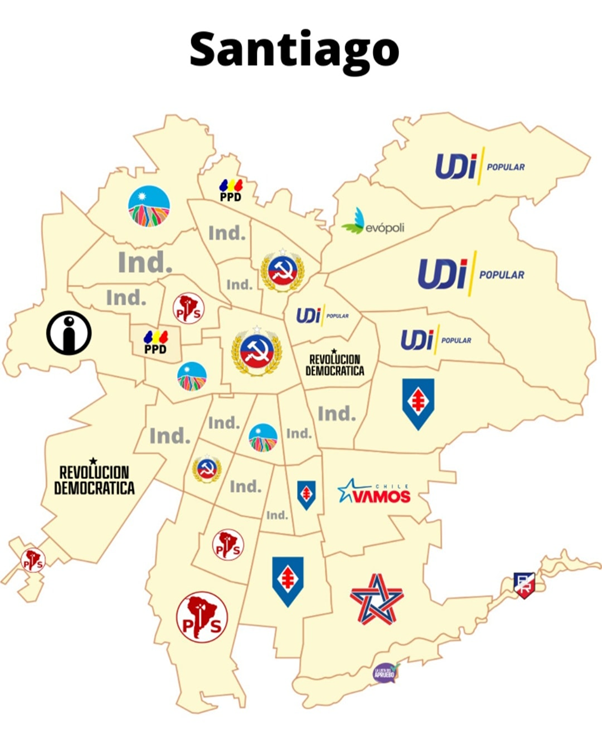 Whilst the right emerged bruised from this election, the Communist Party took the symbolically very significant seat of Central Santiago / Image: fair use

For his part, Gabriel Boric, deputy of Social Convergence and founder of the Broad Front, obtained the necessary signatures to register his presidential candidacy.

The communists doubled their mayoralties to 6. The most surprising victory was that of Irací Hassler in the symbolically significant commune of Santiago Centro, the capital, after a disastrous administration by right-winger Felipe Alessandri (National Renovation), who lead the violent repression of secondary school students, which sparked the 2019 uprising.

Some have argued that the defeat of the right was the result of abstention by right-wing voters. Above all, president Piñera is thoroughly discredited even amongst his own social base of support. The political and electoral projection of the right depends on its ability to distance itself from the president, whose main desire at the beginning of his term was to ensure the continuity of the right in government.

Having been unable to secure reelection in the council, right-wing presidential candidate Evelyn Matthei (UDI) dropped out of the race. For his part, Joaquín Lavín managed to place Daniela Peñaloza as his successor in the commune of Las Condes. This affirms the authority of the UDI candidate to summon the support of the whole of the right.

The important thing is the possibility that the majority of the independents, together with the constituents of the left-wing bloc, can assert their weight in the Convention to ensure their two-thirds majority and set an agenda for significant changes in the system. However, it is not possible to change the logic of the domination of capital via an institutional route.

Since the October rebellion and during the pandemic, it has been the dockers’ strike, along with the cacerolazos, protests and street clashes in towns in Santiago and the regions, which have expressed political action independent of the parties of the regime. This only weeks ago forced a political defeat of the government in the Constitutional Court regarding the question of the third withdrawal of money from the private pension funds. That marked the most tense moment since the social explosion in 2019. A second generalised uprising was a real threat.

The issues discussed in the constituent body will be strongly mediated by this repertoire of mobilisations that the masses have shown themselves capable of deploying. On the other hand, the People’s List has stated that they will hold “peoples’ assemblies” to link the work of their constituents with the decisions made in grassroots organisations in the districts. In this sense, a key factor is how this is articulated with the territorial organisations, councils, assemblies, soup kitchens, etc. that since October 2019 have gained the potential to be real organs of workers’ power.

Furthermore, a certain distrust towards the constituent process is indicated by the low turnout of 42 percent. By contrast, in the plebiscite of October 2020, the working-class and popular commune of La Pintana in Santiago had the largest increase in electoral participation at the national level and the YES vote swept the board. This time, the participation barely reached 36 percent!

Let us also remember that, during the protests for the third withdrawal of money from pension funds, the same commune of La Pintana saw its inhabitants pour into the streets in great numbers.

The main demands of the October rebellion were for pensions, health, education and against inequality. The pandemic only aggravated these problems. The Constituent Convention is supported to the extent that the masses understand it as a vehicle to improve their living conditions, and really change the economic system beyond constitutional formalities. It was not clear to many that voting for some constituents who are going to sit for a year in discussions would mean a concrete change in their conditions.

Although the right did not reach the one-third needed for veto power, together with other regime parties of the former Concertación, they could gather enough votes to defend the interests of the capitalists in key matters. And in any case, it is not obvious that all the independents are going to line up on all issues. Many come from diverse social movements and political tendencies that do not necessarily converge on a common agenda.

In this sense, there is a lack of revolutionary leadership that can guide the energy of the masses to definitively defeat the ideological and economic pillars of the capitalist system, and to elaborate a clear political program that puts power really in the hands of the working class and organised communities.

The ghost of “Chilezuela”, [the fear-mongering that a left victory would lead to Chile ending up like Venezuela] and other misinformation campaigns, will play a role and will deepen the polarisation of political ideas in society. But this can no longer have the same power as before. The whole world is watching the uprising and national strike in Colombia, which has suffered brutal repression with dozens of deaths and hundreds of disappeared.

But above all, the Colombian working class has caused a partial defeat of the government, which had to back down in its tax reform. This is in the bastion of imperialism in South America, with huge implications for the entire region. Since the protests in Puerto Rico, through Ecuador, then Chile and Colombia, the mass movements have been closely followed and lessons learned, in a demonstration of the internationalism that unites them. 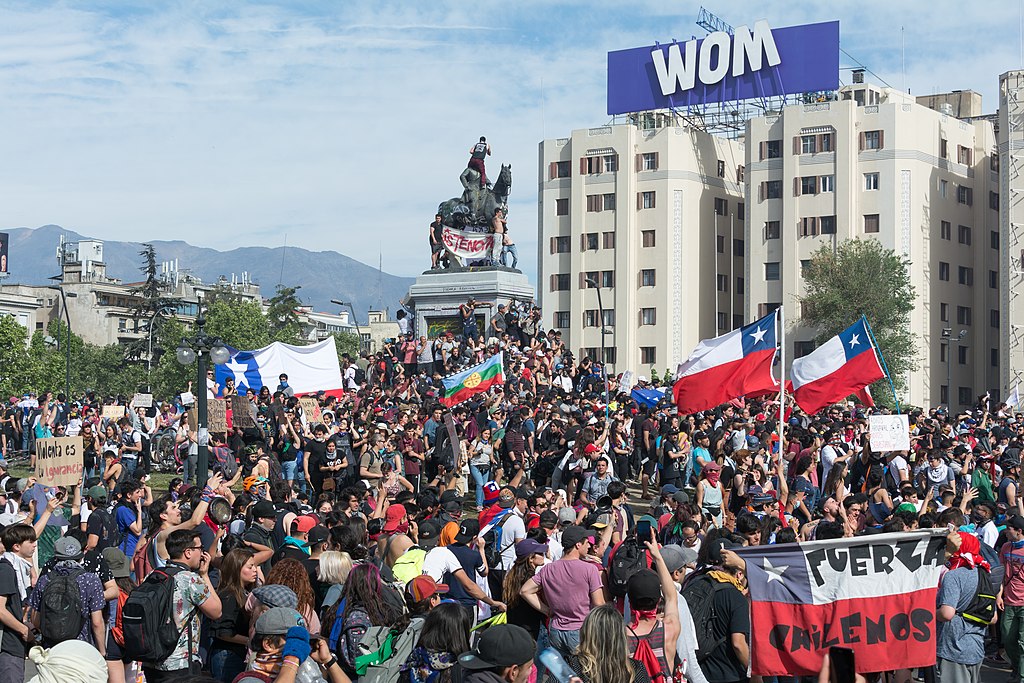 These results are a (distorted) political expression of the October 2019 insurrection, and represent a new stage in the political radicalisation of the Chilean masses / Image: Carlos Figueroa

These electoral results are one more chapter in a process of mass political radicalisation, and the seeking of a way out of the capitalist crisis outside of the traditional parties that dominated the last decades. The crisis of the regime opened in 2019, but it has not been closed. Whatever the outcome of the presidential race later this year, any future government will be in the uncomfortable position of a much-weakened presidential regime, in conflict with Congress.

The Constitutional Convention will cause more friction between the state institutions, during a presidency that is expected to lead the constituent process, manage the post-pandemic economic situation and which faces the collapse of the privatised pension system.

A final plebiscite in 2022 will put the new constitution to a popular vote. If we have emerged from the pandemic by then, with lockdown measures lifted and a deteriorating economic situation, the road ahead will be full of unpredictable events and new eruptions at the national and regional level.

We need to build a Marxist tendency of the working class and the youth that connects the experience of the October rebellion with the Latin American revolution, to fight for the end of capitalism and the legacy of the dictatorships.