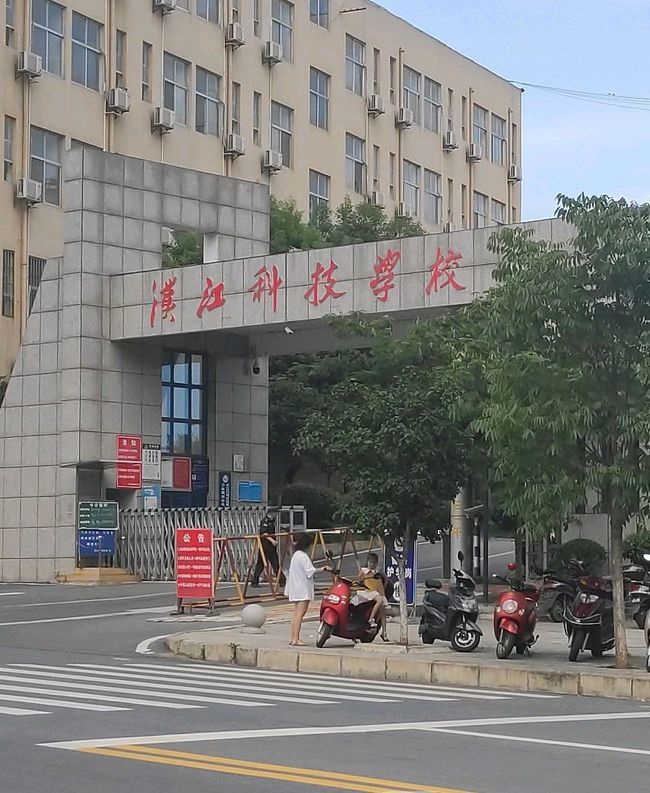 We received the following report about a horrific practice in China, where school students are contracted to work in factories by their schools and forced to toil in slave-like conditions. The original report was published on The Spark, the website of the Taiwanese supporters of the International Marxist Tendency.

Consecutive night shifts, long working hours, high intensity labor, machine-like life, brutal management, and extremely low hourly wages. These are the daily realities of the Chinese working class. Despite the fact that they are told they are the supposed “masters of the country” in the “new era of socialism with Chinese characteristics”, in many respects, workers today live lives not unlike those of the “indentured workers” (包身工) of the 1930s, as depicted in the works of Chinese playwright Xia Yan.

Recently, a 17-year-old Hubei boy named Sun committed suicide after having endured over half a month of this kind of indentured servitude. Sun was a junior high school student at the Hanjiang Science and Technology School in Shiyan, Hubei province (ironically, the school was previously awarded with honorary titles such as “advanced educational institution”, “advanced institution in rural vocational education”, and “Starfire Technology Demonstration School”). This is a vocational secondary school, or a school within the so-called ‘vocational education’ system in China. After this tragic death, the story began to spread on the internet, provoking a lot of heated discussion about the nature of China’s vocational education system, and the state of society in general.

On 10 June, more than 90 students, including Sun, were illegally placed by their school in a private factory in Shenzhen for a three-month period of forced labor. This was, supposedly, a daily ‘rehearsal’ for the practical internship component of the vocational education system. Instead of improving their skills, or imparting knowledge and experience, what awaited these students was slave-like toil.

The hourly wage for the students in the internship is 14RMB (around $2.16 USD), far lower than the standard hourly wage of 26RMB per hour (around $4 USD) in China. So-called ‘professional internships’ are completely unrelated to the professions that the students are training for. Where students and parents have questioned these arrangements, schools have responded by issuing threats to expel the students from the programme in order to silence dissent. With the school in control of the students’ diplomas, the latter are intimidated into what is effectively forced labour.

On the factory’s shop floor, Sun was assigned to heavy lifting transportation duties, with his shifts often being in the evenings. During his time there, Sun committed the mortal sin of trying to take a rest a grand total of four times, for which he was punished. On the first occasion, on 14 June, Sun was physically unable to eat after staying up all night moving boxes. He decided to remain in his dormitory to get some rest and did not formally request any time off, for which he was branded with an ‘unexcused absence’ the next day.

On the second occasion, on 17 June, he was afflicted by a recurring stomach ailment exacerbated by consecutive night shifts and preexisting conditions. He then asked the head of the assembly line for leave, but the next day was still recorded as an ‘unexcused absence’.

At 10 pm on 21 June, Sun again decided to take leave with two other students because he was feeling unwell. On the night of 23 June, Sun suffered a head injury moving boxes on the shop floor and his glasses were smashed. He was hastily patched up and forced to continue with further inhuman toil.

Before the night shift on 24 June, Sun asked for leave and, after verbally obtaining permission from his supervisor, then placed his leave slip on the latter’s desk. The next day (25 June), the supervisor falsely accused Sun of being absent from work again on the grounds that he had not seen the leave slip. Sun tried to defend himself, but his classroom teacher turned a blind eye and called Sun’s parents, accusing him of four absences and threatening to expel him from school if he was absent again.

In the face of these slanders and the grueling conditions, Sun took his own life the same day. At 10.28 am, he jumped from the sixth floor of the factory’s dormitory. After having been rushed to hospital, at 12pm, Sun was pronounced dead. A young, vibrant life thus disappeared from the earth. 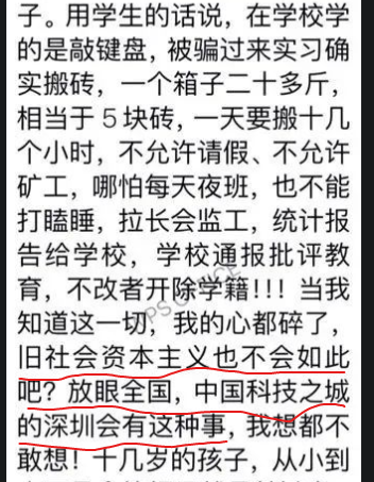 After the tragedy, Sun's father shared his story with the public on the internet, while lamenting that a city as wealthy as Shenzhen would let a child like his son suffer such an inhuman degree of toil. This is unfortunately a common phenomenon in China. /image: fair use

After Sun's death, the factory blocked all related information and ordered employees not to talk about the incident. The police also “took care of the situation” for the factory management by deleting the photos and videos of the scene of the incident from security guards’ and employees’ cell phones. At the same time, the school’s teacher placed several students who had been emotionally affected under custody and forced them to return home.

Sun’s father rushed to the factory as soon as he heard the news, but the factory failed to provide any explanation or communication. As news of the incident gradually spread, the government stepped in and made a token gesture to “protect the rights of the students” by commencing a light crackdown on ‘indentured labour’ in the factory in question. This travesty has occurred in an area that is hailed as a “pioneering showcase of socialism with Chinese characteristics”.

As news of the circumstances of Sun’s death spread, many Chinese internet users shared their own stories after learning of his ordeal, and lamented the fact that a city as wealthy as Shenzhen can somehow allow young students to suffer such extreme hardship.

Indentured workers in the “new era of socialism with Chinese characteristics”

In fact, this is nothing new in China. Vocational school students have been working as indentured workers for some time. Conditions might be more ‘civilized’ than a century ago in the sense that the Chinese Ministry of Education prohibits such practices on paper under the ‘Regulations on Management of Internship for Vocational School Students’. But the young workers of today, like the emaciated youths with limbs like “dried reeds” described in Xia Yan’s stories, have no recourse to the law, and can do little more than submit to the suffering inflicted on them by the capitalists. Whilst the capitalist flout the law, the authorities simply turn a blind eye.

During this “internship” process, the schools and the employers work hand-in-hand. The schools responsible for sending students to the factories take a percentage of the students’ salaries, while the employers get a batch of cheap slaves. The only thing the students get from their ‘training’ is a battered body and a token ‘salary’. The Communist Party and the trade union are completely absent in this process. They only come out symbolically – pretending they are doing something for the people – when an incident occurs that can no longer be covered up. The factories and schools are able to get away with their actions with little to no punishment.

Most of the vocational students sent to factories come from poor families, with parents who have had little in the way of education, having been born in economically backward and educationally deprived areas. Their fate is sealed from birth, and the so-called vocational education system only prepares them for a life of wage slavery.

At present, although the Chinese Communist Party has expressed its intention to make changes to the vocational education system, no change of substance has yet been made. At the end of the day, in the eyes of the CCP and the Chinese ruling class, workers are a so-called “demographic dividend”, i.e. wage slaves ready to be disposed of at any given moment. After all, if ‘socialist’ China is to develop, how can it do so without some “sacrifices”? 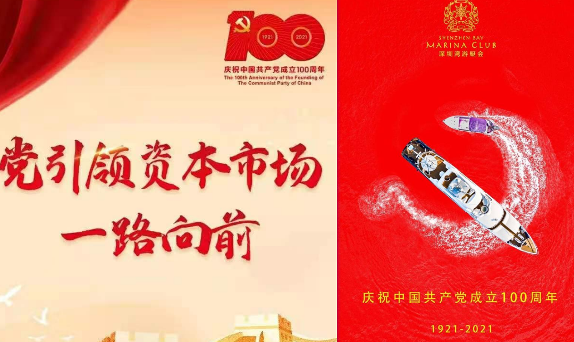 “Socialism with Chinese characteristics” is just regular capitalism with Dickensian exploitation. Pictured is a Yacht club’s tribute poster to the 100th anniversary of the CCP’s founding / Image: fair use

Today, 43 years after “reform and opening up” led to the restoration of capitalism, China has become more and more entangled in the contradictions of capitalism. The attacks on the working class are getting worse, but Chinese capitalism has also created the largest proletariat in the world. It is because China has such a strong proletariat that the Communist Party, the state apparatus that defends capitalism, cannot tolerate the meagerest democratic rights for workers to express themselves. The high levels of government repression in recent years are a sign that the ruling class is beginning to fear the growing discontent of the masses.

However, the problems that the capitalist market has created in Chinese society will continue to grow, and no amount of repression will prevent discontent from erupting among the masses. This year we have witnessed the arrest of Xiong Yan, the highly visible leader of the delivery workers’ alliance for uniting food delivery workers in joint struggle. The regime was afraid of the potential this had for inspiring other workers to follow suit. At the same time, there is a growing struggle among young people, both in the form of online protests and through campus protests.

The conditions of Chinese capitalism, with blood dripping from all of its pores, will eventually force the working class to fight back against the system. This is especially true of young workers, many of whom have experienced the same hardships as Sun. They will need the revolutionary theories of Marx, Engels, Lenin and Trotsky to fight against the ruling class’ criminal gang, with Xi Jinping at its head. They must seize power and bring the assets of big capital under workers’ control as part of a democratically planned economy. Only then can they change society and establish a genuine dictatorship of the proletariat: workers' democracy.