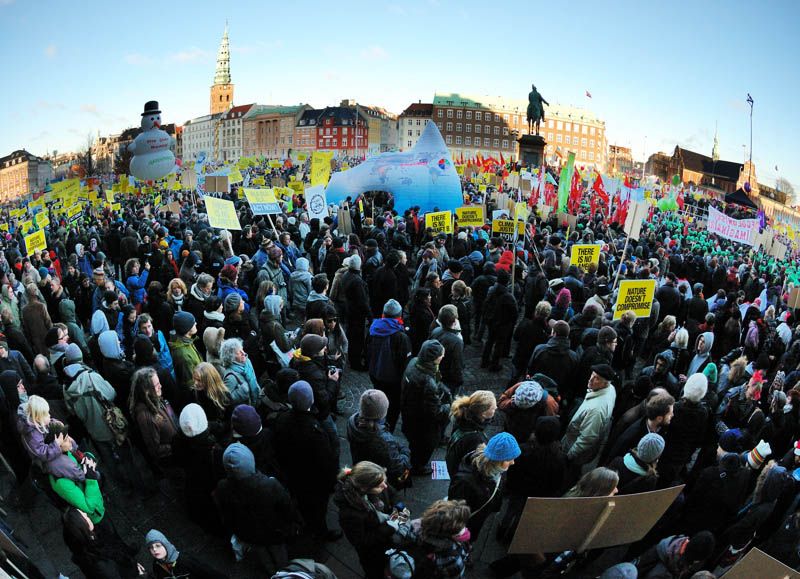 The dramatic collapse of the talks at the Climate Summit in Copenhagen serves to highlight one thing: the capitalist governments of the world cannot solve burning issues, such as damage to the environment provoked by the anarchy of the market. The thirst for profit is in direct contradiction to the interests of the working people of the world. Social revolution on a global scale is the only real answer to the problem.

The UN Climate Summit in Copenhagen has ended in a complete mess. The Danish presidency of the conference has simply given up and thrown in the towel. This, however, should not come as a surprise. No other outcome was possible to begin with. Capitalism by its very nature is incapable of dealing with a global problem such as this, especially if we consider the enormous conflicting interests between the capitalists on a world scale and the colossal burden of the present economic crisis. Delegates at the summit on Friday described the situation as “confusing” and “desperate”.

The poor countries demanded that the advanced capitalist countries donate 5 percent of GDP to climate protection measures. The problem is that the advanced capitalist countries have spent huge resources on saving their collapsing banking systems, and as a consequence are now heavily burdened with debt. As a result, in all countries, they are struggling hard to cut back on public spending. The world crisis of capitalism does not even allow them to maintain the levels of spending of yesterday – so how can they set aside resources for climate-friendly measures?

Let us be clear on this question. The resources, the wealth, the human resources, the science and technology do exist to combat the polluting effects of capitalism on this planet we live on. The problem is that these resources are used to the advantage of the rich, who are not prepared to see cuts in their profits. The truth is, as Hugo Chávez said in his speech, that “capitalism is a destructive development model that is putting an end to life, and that threatens to put a definitive end to the human species.”

All the advanced capitalist countries are in a mess. They may have avoided a 1929-style collapse... for now. But the price for this is huge deficits in all countries. Take for example Germany. The German Finance Minister, Wolfgang Schäuble, according to the Financial Times, on Wednesday remarked that reining in the soaring budget deficit would “not be achieved with the conventional instruments”. In other words: in order to pull German capitalism out of this crisis, they will have to wage a vicious class war against the working class. The capitalists in Germany and other countries will seek to brutally cut back on state pensions, free health care, free education as well as all other elements that make for a semi-civilized society. How can they be expected to worry about climate change and catastrophes in poor countries? The truth is that these problems will never be solved under capitalism. 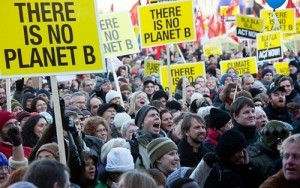 President Evo Morales from Bolivia firmly placed the blame for climate problems on capitalism: “The real cause of climate change is the capitalist system. If we want to save the earth then we must end that economic model. Capitalism wants to address climate change with carbon markets. We denounce those markets and the countries which [promote them]. It’s time to stop making money from the disgrace that they have perpetrated.” Hugo Chávez in his speech condemned the capitalist system and said that the only alternative is socialism. He added that “if the climate were a bank, they would have bailed it out already”.

It is the enormous accumulation of contradictions flowing from this situation that eventually led the Danish presidency of the conference simply give up and then to declare that there would be no real agreement at the summit. The leaders from the advanced capitalist countries had miscalculated the whole situation. They thought that they could make the usual deal that would make no difference at all, while presenting it as a big step forward. But they didn’t even manage to do this. As the Wall Street Journal reported on Friday:

“Any agreement is expected, at best, to envision emissions-cutting targets for rich nations and billions in help for poor countries, but to fall well short of the goal of a legally binding pact. The political deal would still be seen by many as a setback, following two years of intense negotiations to agree on deeper reductions in the emissions of carbon dioxide and other gases largely blamed for global warming.”

The summit in Copenhagen also made the headlines around the world for the police repression in the streets. On 12 December, a human flood moved through Copenhagen. This 100,000 strong demonstration was a protest against the fact that capitalism is destroying the planet. The police repression of protestors in this march – as well as against other demonstrations – has been reported all over the world. Those who thought of the Scandinavian countries as nice, peaceful, harmonious societies have no to think again after they saw the scenes of hundreds of youth rounded up and tied up like animals. 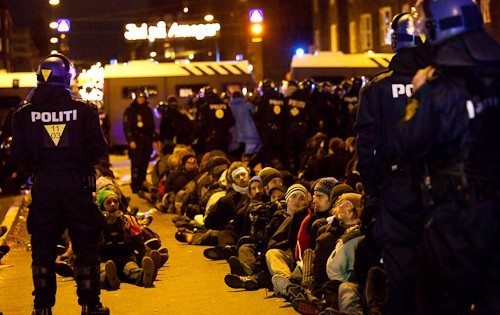 Heavy police presence at the protests during the Climate Summit in Copenhagen. From the 11th December to the 13th December, the police made 133 so-called “pre-emptive arrests”, but then they only charged four people for anything, proving that they were all arbitrary arrests of innocent protestors. These are clearly police-state methods with one purpose in mind: to strike fear into the youth and the working class in order to get them to bow their heads and accept the attacks on living standards and other capitalist policies. The police have even distributed post-cards to all school students of 14-15 years of age in Copenhagen, warning them not to participate in demonstrations.

In his speech at the summit, Chávez condemned the repression, applauded the demonstrators and highlighted one slogan, namely “Don’t change the climate – change the system”. He stressed that the only alternative to capitalism is the socialist transformation of society: “Our revolution seeks justice for all people. This path is socialism. Capitalism is the road to hell. History calls us to struggle.”

The United States have demanded that China agree to cut its emissions and accepts “a broader agreement that covers the ‘transparency’ of China's measures to limit heat-trapping gases,” as the Wall Street Journal put it. What does this mean? It is in fact merely a very flimsily veiled protectionist step on the part of US imperialism. It means that the US is insisting that China must stop flooding the world market with cheap goods that put American capitalists out of business. Furthermore, they also want China to open its doors to espionage! Of course, the Chinese leaders are not eager to sign such an agreement – on the contrary, they have maintained that their “voluntary emissions target” is “non-negotiable”. 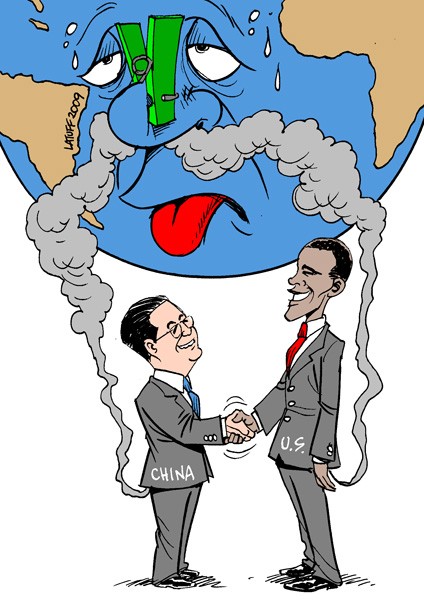 Drawing by Latuff. The diplomatic clash between China and the US has, of course, nothing to do with CO2 emissions and climate change but everything to do with profits and the protection of markets. This is also why they can’t reach a real agreement. They can issue a political statement with a lot of fine words but with very few concrete promises – and these promises will be broken anyway. That is how capitalist diplomacy works.

The present economic crisis has in fact further aggravated the threat of protectionism. Governments everywhere are trying to export unemployment by the means of tariffs on imported goods and subsidizing their own capitalists at home. The different capitalist powers are desperately trying to conquer the markets of their competitors, while protecting their own. This is reflected in the antagonisms between countries such as China and the US, but also between other capitalist powers, even between the EU and the USA for example.

Need for a plan

While the United States and the European Union allocate US$4100 billion to save the bankers, they offer peanuts for programs on climate change. While the US spends US$3.6 billion per month on killing poor people in Afghanistan, 12 percent of the American population depends on food stamps to survive. The total income of the 500 richest people in the world is greater than the 450 million poorest living on two dollars a day. Capitalism in the 21st century means horror without end for the vast majority of the planet’s population. The continued existence of capitalism is a mortal threat to millions of people around the world.

At a public meeting with more than 3000 people in Copenhagen, organized by various trade unions, political organizations and solidarity campaigns, including Hands off Venezuela, President Hugo Chávez correctly pointed out that a socialist revolution is the only solution to the problems of humanity. He stressed the need for a worldwide revolution and repeated his proposal for the Fifth International as an instrument for this purpose. What is essential is that these words be translated into deeds. If Chavez acted on these words in Venezuela and began the process of socialist transformation in Venezuela by expropriating the property of the local oligarchy and of the imperialists, it would mark the beginning of the all-Latin American revolution, which in turn would give a huge impetus to the class struggle throughout the whole world.

The fact is that a solution to climate problems, poverty, disease, illiteracy, unemployment, wars and hunger, will never be achieved on a capitalist basis, much less by the hypocrisy of bourgeois diplomacy. The continued existence of capitalism will simply aggravate these problems in the coming period. Capitalism cannot be reformed from within; it must be overthrown by the conscious action of the working class. It is only the working class – the class that represents the future – that can bring about real change and a socialist transformation in society, by fighting for revolutionary Marxism within the labour movement in all countries.

The failure of the Copenhagen summit is an indication of the sever crisis we are experiencing. But it will also serve a purpose: to open the eyes of many workers and youth who may have had illusions that such summits could begin to the tackle the serious problems we face. The failure of the summit strengthens those like the Marxists who argue that if we want to really save the planet we must remove the economic system that is at the root of all the problems, capitalism itself.