A report on the recent four-day national conference (9 to 12 April) of the Spanish Marxists of El Militante, with the participation of over 180 delegates and visitors.

Over 180 delegates and visitors participated over four days (9 to 12 April) in the Conference of El Militante, Spanish section of the International Marxist Tendency. During these meetings there were intense discussions about the new world situation marked by the crisis of capitalism; the perspectives for the class struggle in Spain; the advances made by the Marxists on the trade union front; our active participation in the struggles in defence of jobs; our role in the student movement; our role in the mobilisations against the Bologna directive and in defence of state education. Enthusiasm and confidence in the socialist future was the major theme of the meeting. 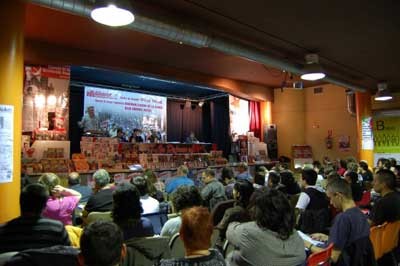 The first session was dedicated to world perspectives. Alan Woods in his speech explained the nature of the present crisis of overproduction and its impact on the international class struggle. Alan produced detailed figures about the contraction of production and international trade, pointed out the perplexity of the ruling class at these events, as reflected in the failure of the measures taken so far to escape the chaos of capitalism. He also addressed the implications of the present recession, surely the most important in the history of capitalism, and in global relations between the imperialist powers and the impact that the present crisis will have on the consciousness of millions of workers and their mass organisations. These mass organisations will be shaken from top to bottom, opening up new and better opportunities to build the forces of revolutionary Marxism. Alan in his speech explained the new wave of demonstrations that have shaken Europe and the social, economic and policy instability which will continue in the coming years around the world, with ebbs and flows in the struggle of the oppressed masses and the need to prepare for sharp and sudden changes.

During this session eleven comrades spoke who contributed to the debate, analysing the revolutionary events in Europe, Latin America, the processes in China and its world implications, the developments that are shaking Eastern Europe after twenty years of capitalist restoration and the work of the Marxists in the workers' mass organisations.

In the second session of the Conference, introduced by Jordi Rosich, we debated the perspectives for Spain: the economic debacle of capitalism in our country and its policies, marked by a swing to the right of the PSOE government and the offensive against workers, against employment and wages. We also discussed in depth the national question in the Basque Country after the shameful agreement between the PSE (Socialist Party) and the PP (Popular Party) to form the new Basque government, the situation in the labour movement and the perspectives for a general strike. In the session 14 comrades from all over Spain spoke, dealing with many aspects of today' political situation, the situation in trade unions and the work of the Marxists, the crisis of the right, changes within the United Left (the electoral front of Communist Party), the situation of youth and student movements. 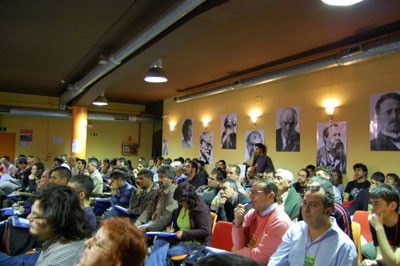 At the next session the discussion focused on building the forces of Marxism in Spain and the work done by the Marxists on all fronts of the class struggle. It was introduced by Juan Ignacio Ramos. It is worth highlighting the huge amount of activity we have organised in the workers' struggles in defence of jobs, against the attacks on the trade unions and the campaign we have been mounting for the workers' unions to call a general strike. It also confirmed our support for the general strike of the Basque Country next May 21, with our own slogans, and to agitate for the UGT and CCOO trade unions to support this general strike. This mobilisation should be a green light to organise a general strike throughout the country, against the attacks of the employers and to force the PSOE government to drastically change its course to the benefit of workers, the unemployed, youth and in defence of healthcare and state education. This session, which concluded with commissions, also addressed the activity of the Marxists in the youth and student movement, our contribution to the strengthening of the Students' Union (Sindicato Estudiantes) and the impetus of the mobilisations against the Bologna directive and against the privatisation of state education. There was a special emphasis on the need to continue the close co-operation with the Frederick Engels Foundation in an effort to provide the new generation of revolutionary activists with the classics of Marxism, the theoretical works of the IMT and the texts of comrades Ted Grant and Alan Woods. The fact that the Frederick Engels Foundation has become the leading publisher of Marxist works in the Spanish language is a source of great pride.

During the conference we also heard a report by comrade Jorge Martin about the big development of the International Marxist Tendency throughout the world. The advances of the IMT in Latin America have been dramatic in recent years, with the formation of new sections and the incorporation of Marxist groups into our ranks. Ten years ago we were just based in Mexico, while today there are sections and groups in Mexico, El Salvador, Argentina, Brazil, Venezuela, Colombia, Bolivia, Guatemala, Ecuador, Uruguay. Our forces have also expanded throughout the European continent, in the Arab world and in Asia, where we have the most important section of the IMT, the comrades of The Struggle in Pakistan with more than 2,500 members. The IMT has sections in 32 countries in Europe, America, Asia and Africa and groups and contacts in 33 other countries.

The last session, which was introduced by comrade Miriam Municio, was devoted to the workers' press, to our newspaper El Militante, and its role as organiser of the forces of Marxism as a tool for bringing the ideas of scientific socialism to the entire labour movement and youth, as well as an organ of expression of workers' struggles and problems of our class. It is an example of how the press is working, tenaciously and step by step, and how we can lead the way in this new phase of class struggle.

Reflecting the political maturity and enthusiasm of all who fight under the banner of Marxism, of the IMT, the Conference held a spectacular collection to continue to develop our work. We achieved the figure of €18,010! As we have always explained, a revolutionary programme goes hand in hand with revolutionary methods of finance. Finally, the Conference concluded with the singing of the Internationale and Bandiera Rossa.