Details
Roberto Sarti of the FalceMartello Editorial Board
22 January 2015 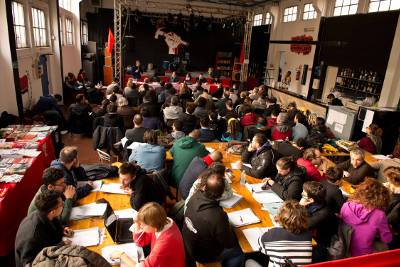 Over 150 comrades, from 25 different cities, gathered at the “El Pueblo” Arci Circle in Milan on 6-8 December for the national conference of [Left-wing, Working class and Revolution], the name that the comrades of the IMT in Italy agreed upon during the proceedings. It was a relaunch of the organisation, and there could be no better time for it! After years of relative calm, the Italian working class is reawakening, and along with it the class struggle.

The conference was opened by Alessandro Giardiello, who introduced a discussion on the specific crisis of Italian capitalism within the protracted crisis of world capitalism. It is this crisis that has forced the ruling class in Italy to launch an unprecedented offensive against the Italian and in particular on the organised workers. The Renzi government is proving to be a very useful tool in attacking the gains of the workers. It was only a few months ago that the leaders of the CGIL (the main trade union confederation) had declared that strike activity was old fashioned, but then very quickly within a matter of weeks, they were forced to call a series of mobilizations that have not been since Cofferati was the general secretary (1990-2002). In this conflict – which is not a facade, but a real class conflict – we do not adopt aany “third position”, as some on the left have done playing down the role of the CGIL. We side with the CGIL, against the government. But we do not sign blank cheques for Camusso [general secretary of the CGIL] or Landini [general secretary of the FIOM metalworkers’ union of the CGIL]. In the present conditions, for this struggle to win, it is necessary to generalise it and render the country ungovernable. 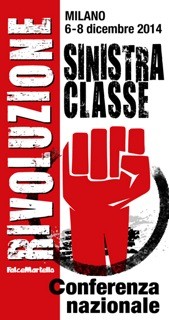 Many of the interventions from the delegates focused on the changed situation and the potential for this new situation to develop into something much bigger. They also centred on the generalised political, institutional and social crisis of the bourgeois system. The unprecedented level of abstentions in the regional elections in Emilia Romagna and Calabria was a clear signal from the masses: they do not feel represented by any of the political parties, at a time when the masses are on the streets protesting against the government.

The comrades from Emilia Romagna explained that this time abstentions were highest among the more traditional working class strongholds of the old Communist Party (PCI) and later the Democratic Party (PD).

Comrade Fred Weston, representative of the International Marxist Tendency, explained this mass disillusionment with the more “traditional” parties has an international character. Social-Democrats, whether in government or in opposition, support the draconian policies dictated to them by the Troika, without any reserve. The fall in living standards and the growing mass mobilisations of the working class have led to the radicalisation of a significant layer of workers and youth. Politically, this been expressed in the growth of parties which, until recently, had been on the margins such as Syriza in Greece, or in the rise of new formations such as Podemos in Spain.

The independence referendum in Scotland has produced a politicisation and radicalisation of the workers and youth who, until recently, had not been involved in politics. It has also led to a huge layer turning away from the Labour Party, which is seen as part of the establishment. Comrade Weston explained that Italy is fully immersed in this same process. 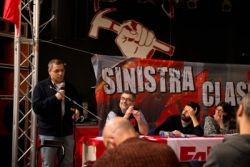 In the following session, Fred Weston explained the progress made by the International Marxist Tendency. From Canada to Greece, from Pakistan to the United States, from South America to Europe it is growing everywhere. This is thanks to a bold turn to the radicalised youth and workers directly with the ideas of Marxism and a revolutionary programme.

The first day’s proceedings concluded with a concert by the Banda Popolare dell'Emilia Rossa. 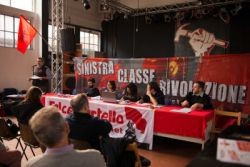 In the trade union commission, Paolo Grassi introduced the discussion by outlining the nature of the current strikes taking place in workplaces across the country. The interventions of the comrades who are on the national committee of the CGIL, Mario Iavazzi, and the Central Committee of the FIOM, Paolo Brini, were of particular interest as these comrades are defending our positions right at the top of these organisations. Matteo Parlati (from the Ferrari plant in Modena) and Domenico Loffredo (from the Fiat plant in Pomigliano) reported on our work in the Fiat group, while Antonio Forlano spoke about the significant progress of the Marxist Tendency, in a traditionally backward sector such as that of the freight cooperative drivers in Milan.

The individual interventions of the comrades served to sharpen our overall understanding of the situation that is opening on the trade union front in Italy. After the general strike of 12th December, worker mobilisations must be taken to a higher level. Given the timid stance of the the trade union leadership, we must pass onto the offensive and broaden out the struggle.

The youth commission also had a lively debate, kicked off by the introductory speech of the national coordinator of “Sempre in Lotta”, Alessio Marconi, and followed by the many youth present.

He explained that the change in the political situation had expressed itself both in the student movement in the weeks prior to the congress in a series of secondary school occupations and also in the general strike of December the 12th. “Sempre in Lotta” has become a leading, national, student organisation, when other existing student groups have entered into crisis. This is not only due to its presence in small towns such as Agrigento, Crema or Varese but more recently, also for the progress made in big urban centres such as Milan and Naples. “Sempre in Lotta”  has had significant  results, starting from the campaigns against the student fees at the beginning of 2014,  through to the student elections held at the beginning of this academic year. As explained by comrades Marco Ferreri and Flavio Fuca', the Sempre in Lotta lists in Agrigento won 1500 votes in three different schools, wining the school elections. Also, during the CGIL demonstration which took place on the 25th of October, the Sempre in Lotta bloc (of about 100 students) was one of the most militant, attracting the attention of many taking part in the demonstrated, who congratulated the comrades for the work they have dione.

Claudio Bellotti then led off on the Programme for the Revolutionary Alternative, which clarified the importance of the programme for a Marxist organisation. In this period of deep capitalist crisis, demands for reform of the system are ineffective, and past gains have either already been destroyed or are in the process of being destroyed. The method which we applied to the drafting of the document was that of the Transitional Programme: every demand, even if partial, loses its effectiveness if it is not linked to the struggle for the transformation of society. Furthermore, discussions among the comrades that had taken place at national and local levels served to further develop our demands, particularly those regarding the environment.

On Sunday afternoon a discussion on the new paper was held, as in the next few months we will begin to expand our publications. FalceMartello will become a theoretical magazine and alongside it we will launch a new paper, with increased frequency (printed every two to three weeks), with a reduced number of pages and at a lower price. We want to make the paper a more flexible instrument, which is able to reach out to wider layers of the working class and not simply be seen as the paper of a tendency within a mainstream party. It should appeal to all the youth and left-wing activists, whether they belong to a political party or not. Today, to be seen merely as the “Marxist Tendency of the PRC” could limit the scope of our work among a wider layer of workers and youth.

The new paper, which will be printed in April 2015, represents a great challenge in the development of our movement. Whilst other daily, weekly and monthly papers on the left have closed down, “Sinista classe rivoluzione” is doubling its publications. This is due to the confidence that we have in the perspectives of class struggle in Italy and internationally, and to the fact that our model is that of a militant organisation and not an amalgamation of passive commentators, which the great majority of left-wing organizations have become.

We have launched a campaign to raise 20,000 euros in subscriptions to the paper and the enthusiasm demonstrated in the fighting fund collection for “Rivoluzione” proved that our comrades are made of sterner stuff than the typical “depressed” activists on the left.

The last day of the conference was dedicated to a discussion on the construction of our new political movement, which was introduced by Sonia Previato. Over the past year our organisation has played a leading role in the battles conducted by the left wing opposition within the CGIL. We also organised a National Marxist School in Bologna and a Festa Rossa [Red Festival] in July, in Modena. This autumn we were present in all of the campaigns against Renzi and, in the meantime, we brought forward our own campaign in solidarity with the antifascist resistance in Ukraine, with the presence of Sergei Kirichuk of the Marxist organisation Borotba.

“Sinista classe rivoluzione” is not going to present itself as a new party, but rather a political movement. We want to invest all of our forces in intervening in the mass movement and particularly among the layers of workers and youth who are seeking an alternative. Of course, we cannot fill the vacuum which has been created on the left, as our forces are limited. However, mass parties are not created by simply proclaiming them; they are created by big events. Our appeal is directed toward the FIOM, the CGIL, and to all trade unions and our aim is to open up a discussion in the labour movement on the need for a workers’ party, a need which today is not only felt by a small layer of the most class conscious workers, but also by wider sectors of workers and youth. Based on this perspective, our new political movement will work towards this aim with all of our resources, offering a revolutionary programme and an international perspective to the debate, which today can only be provided by the International Marxist Tendency.

Meanwhile, “Sinistra classe rivoluzione” needs to grow and increase its forces, to be ready for future battles. The struggle against the barbarism of this system, for the socialist revolution, must find more supporters if it wishes to be victorious.

We closed the conference singing the Internationale, after having approved the political documents and elected the national committees. The minds and hearts of all those who attended were concentrated on the need to build the forces of “Sinistra classe rivoluzione”. And with this urgent task in our minds and with the enthusiasm derived from the ideas discussed at the congress, we went back to our local areas and workplaces determined to build the forces of Marxism.