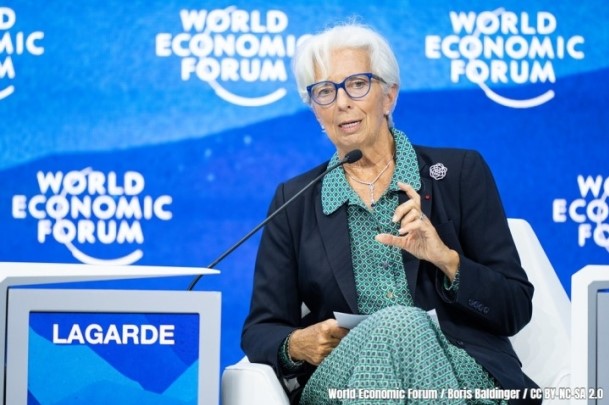 The global elites gathered in Davos last week, to discuss the fate and future of capitalism. With the world economy wracked by inflation and instability, a mood of pessimism prevailed. We need a revolution to put them out of their misery.

The great and the good congregated in Switzerland last week for the latest meeting of the World Economic Forum (WEF) – a (normally) annual conference that former Labour leader Jeremy Corbyn accurately described as a “billionaires’ jamboree”.

This year’s event was the first Davos summit since the start of the pandemic. And much has clearly changed since then.

The word “polycrisis” provides a fair summary of the discussions at #WEF23 – used by multiple speakers over the five days to describe the concatenation of dangers and threats that the global economy currently faces.

This despondent message was reiterated in the WEF’s annual global risks report, published in advance of the latest powwow of CEOs, bankers, and establishment politicians.

“The risk of recession; growing debt distress; a continued cost-of-living crisis; polarised societies enabled by disinformation and misinformation; a hiatus on rapid climate action; and zero-sum geo-economic warfare…” – the list goes on.

All of this, and more, was on the minds of Davos’ delegates this week – a reflection of the deep mood of pessimism that grips the ruling class, and of the dire perspectives for capitalism in the months ahead.

Like the host of any good party, Schwab was determined not to let a bit of bad weather ruin the event. 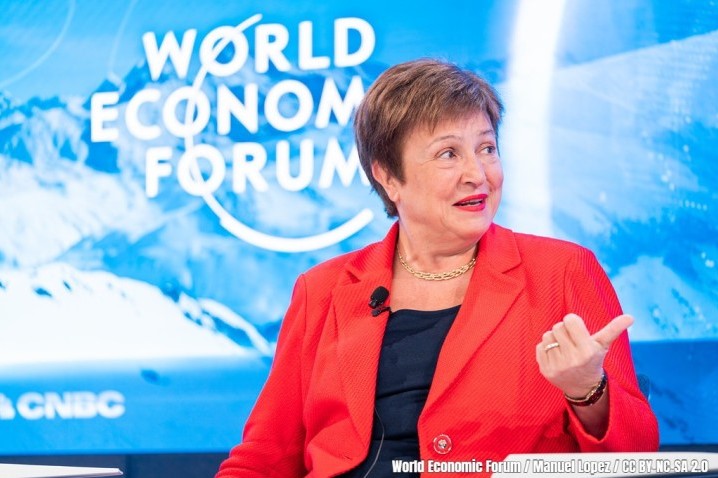 Managing director of the IMF, Kristalina Georgieva, estimated that one-third of the world economy would experience a downturn in the year ahead / Image: Manuel Lopez

Trying in vain to lift spirits, the WEF chief urged attendees to break free of their “crisis mindset”. The only problem being that there was little positive news for his guests to talk about.

Clutching at straws, Kristalina Georgieva, managing director of the International Monetary Fund, told audiences that the outlook for the world economy had marginally improved in recent weeks. But she quickly backtracked, extinguishing any hopes of ‘green shoots’, by adding that “less bad doesn’t quite yet mean good”.

The head of the IMF noted that headline inflation seemed to be falling, and that China’s emergence from its zero-covid lockdown should give a boost to global economic growth. But on both fronts, Georgieva struck a note of caution.

Although price rises have slightly slowed, she stressed that they are still going up at a rate far above central bankers’ two percent target. And the hardline approach being taken by the US Federal Reserve, European Central Bank (ECB), and others – hiking interest rates in an attempt to curb inflation – is almost certain to push economies everywhere into recession.

Indeed, just a few weeks ago, the IMF director estimated that one-third of the world economy would likely experience a downturn in the year ahead, with “three big economies – the US, EU and China – all slowing down simultaneously”.

“Even countries that are not in recession,” Georgieva continued, “would feel like recession for hundreds of millions of people.” A rosy picture indeed!

But it’s not even a case of from the frying pan and into the fire, the IMF head noted, speaking on the panel at the concluding session of #WEF23.

With inflationary pressures – such as the Ukraine war and the breakdown in world trade – continuing, she stated, we are likely to end up with the worst of both worlds: economic slump alongside rising prices.

Will China save capitalism?

Similarly, the IMF chief warned that China’s reopening could prove to be a double-edged sword for the rest of the world. 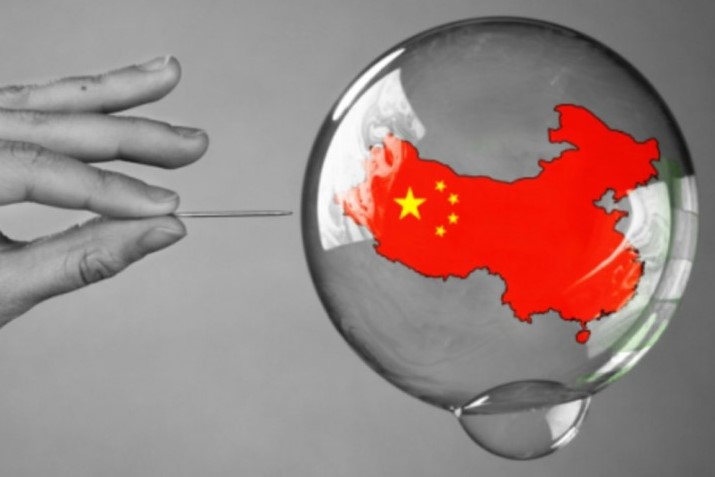 The organic crisis of capitalism is expressing itself in China through the massive bubble in the property market / Image: fair use

On the one hand, she said, Chinese demand for raw materials is likely to boost growth for countries that export these primary commodities.

On the other hand, this same surge in demand – particularly for sources of energy – could act to push up inflation internationally. This would force central banks to raise interest rates even further: increasing borrowing costs for indebted households, businesses, and countries; and pushing economies (outside of China) even deeper into recession.

Even with this caveat, however, bourgeois economists’ predictions are likely to prove to be overly optimistic.

The regime in Beijing might have abandoned its zero-covid policy. But that doesn’t mean that the Chinese economy will return to booming growth.

The ruling class held out similar hopes in 2021, when lockdowns ended in the West and governments told citizens to learn to ‘live with the virus’. Back then, sanguine commentators talked about the prospects of a new ‘roaring twenties’, forecasting a robust rebound from the corona-crash.

Instead, however, a brief recovery – fuelled by pent-up demand, deficit financing, and monetary printing – has given way to a new era of inflation, instability, and crisis for capitalism. And China is set to follow this same trajectory, albeit with a slight delay.

Just as with the rest of the world, the virus and associated lockdowns are not the only thing that has hurt the Chinese economy in recent years. Underlying the covid-chaos is the organic crisis of capitalism, which is expressing itself in China most notably in terms of the massive bubble in the property market.

Xi Jinping’s regime can try to prevent this bubble from bursting, but only by creating further contradictions and turmoil for Chinese capitalism.

Those looking to China to rescue the rest of the world economy – as it partially did in the wake of the 2008 crash, with its unprecedented programme of Keynesian spending – will therefore be sorely disappointed.

Indeed, it is precisely the interventionist measures and inflationary policies of the Chinese state over the last decade-and-a-half – and by the ruling classes everywhere in response to each-and-every crisis – that have paved the way for the mess that capitalism and its representatives find themselves in today.

As ever, bourgeois hubris will soon turn to crisis.

The end of globalisation

Throughout the proceedings in Davos this year, one particular fear stood out: the rise of protectionism and the fracturing of the world market. 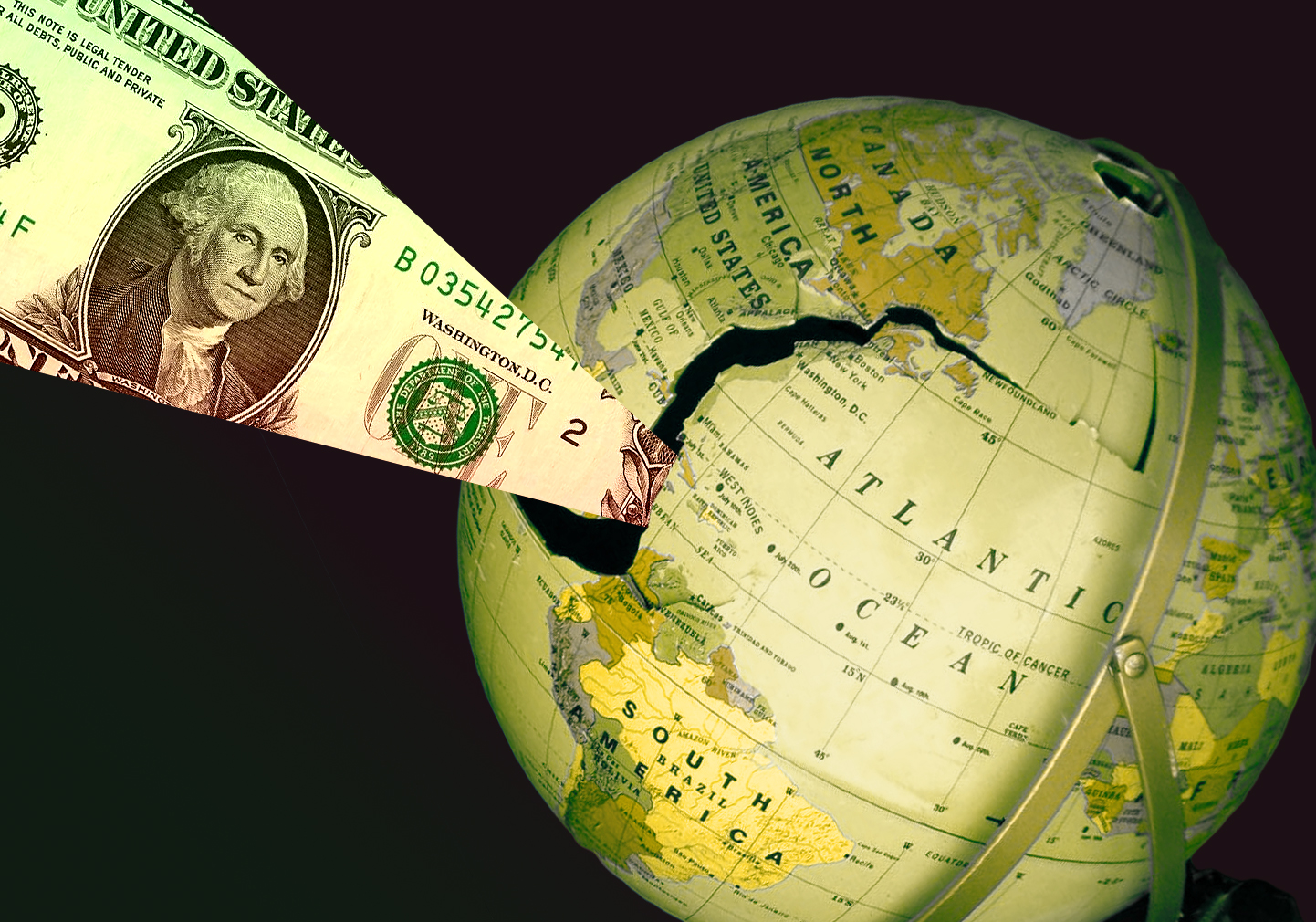 Many attendees were concerned that we could be seeing the end of globalisation / Image: In Defence of Marxism

Are we seeing the end of globalisation? This was the question on everyone’s lips. And despite attempts by various speakers to calm nerves, those paying any attention to #WEF23 will not have been reassured.

“A great deal of whether we can lift optimism depends on the people in this room,” stated the IMF’s Kristalina Georgieva, appealing to her audience of business leaders and policymakers. “Be pragmatic, collaborate, do the right thing, keep the global economy integrated for the benefit of all of us.”

But her pleas fell on deaf ears. Indeed, to paraphrase the famous proverb: there are none more deaf than those who will not hear. And with the world economy slumping and markets shrinking, bourgeois politicians are in no mood to cooperate with one another. Instead, it is every man for himself, and the devil take the hindmost.

From Brexit to Biden’s ‘Made in America’ programme: economic nationalism is being served up in country after country, as each ruling class implements ‘beggar-thy-neighbour’ policies in an effort to export the crisis.

And as supply-chains are rejigged, industries are reshored, and tariffs are imposed, costs will go up, further fuelling inflation, with workers left to pay the bill.

Once again, we see a stark demonstration of how the nation state – alongside private property – stands as a fundamental barrier in the way of the development of the productive forces, as protectionism threatens to turn the looming world recession into an even-more ominous depression.

The real elephant in the room, however, was that of class struggle.

From Sri Lanka to Peru; Iran to China; Britain to France: the working class is starting to move across the world. And these strikes and movements are only the beginning.

The strategists of capital can sense the precariousness of their system. At the same time, they have no solutions; no alternative but to impose austerity and attacks – demanding that workers pay for this crisis.

This is provoking and preparing revolutionary explosions in all countries. The billionaires, bosses, and bankers in Davos therefore have every reason to be terrified.